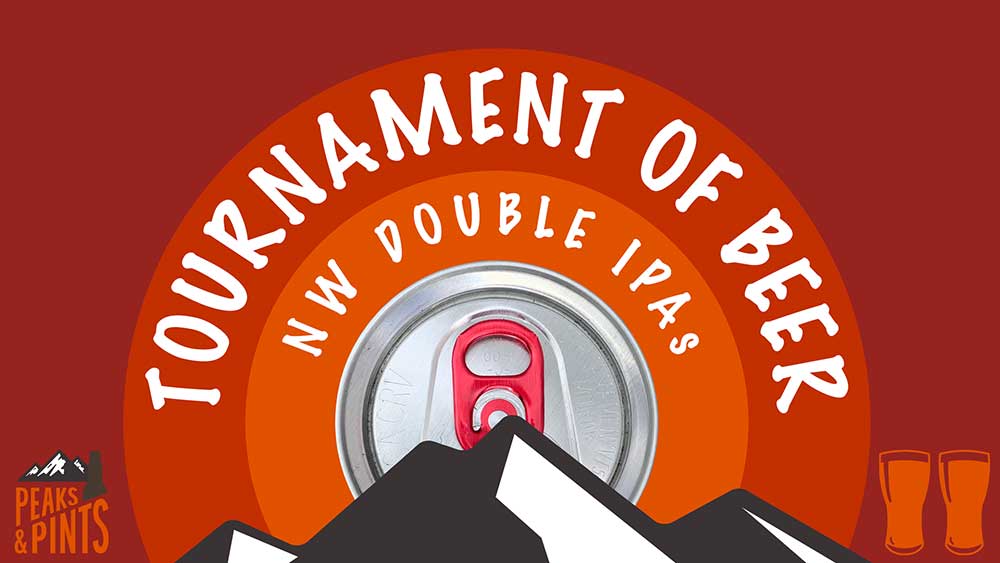 The public nominated 64 Northwest double IPAs for the Tournament of Beer: NW Double IPAs in February. Beginning April 2, through online voting on this website, Washington and Oregon double IPA drinkers will pick daily winners until the best double IPA in the Northwest is crowned April 24. It’s just like March Madness, only with way more fermentable sugars. The IBU-to-IBU battle of the DIPAs grand champion will be announced at the Tournament of Beers Party April 24 at Peaks and Pints in Tacoma’s Proctor District. The final two double IPAs will battle live pouring from Peaks and Pints’ Western red cedar tap log with the champion brewery receiving a permanent handle at Peaks and Pints through the spring and summer.

Instead, Peaks & Pints previews the Tournament of Beer: NW Double IPAs by taking the 64 nominated double IPAs on hikes relatively close to where they were brewed. After all, a post-hike double IPA can quench your thirst and begin to rehydrate you, lubricate your senses and, like the act of hiking, help maintain sanity, balance and perspective. Oh, believe us when we say the hike is still paramount to the experience. If it wasn’t, we’d skip the hike and just head to the taproom. Rather, Peaks & Pints is a big believer in hanging at the trailhead with our fellow hikers, divvying up a beer and discussing the hike, or whatever subjects, as we store away our gear.

Join us. Take the nominated double IPAs on hikes. Then, the Tournament of Beer: NW Double IPAs begins April 2 2021 at tournamentofbeer.com or this website.

Narrows Come Play With Us and Layser Cave Trail

Rainy Daze Only The Tip and Olympic Discovery Trail

Seapine Rainbow Suspenders and Far Side