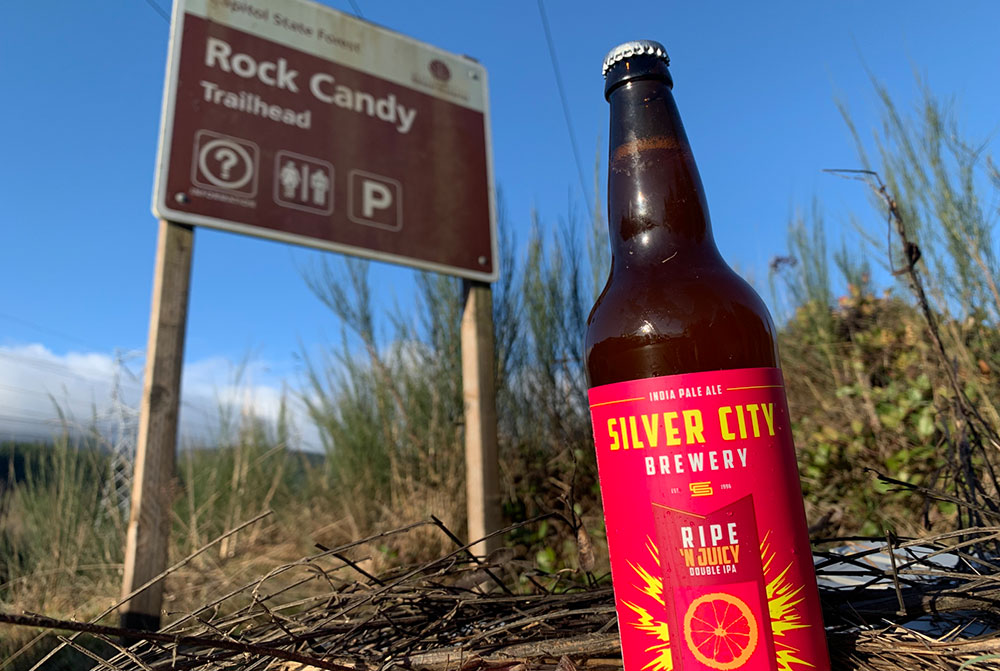 Silver City Brewery Ripe N Juicy was nominated as a seventh seed in the Southern Washington Region of the Peaks & Pints Tournament of Beer: NW Double IPAs, which will begin April 2, 2021. The tournament bracket will be released soon. Since we’re not touring breweries to preview the tournament this year, we enjoyed the Peaks and Pints: Silver City Ripe ’N Juicy and Rock Candy Mountain Trail pairing.

The Double IPA is an American invention that takes hoppiness to a much more intense level than traditional English IPAs. In the case of Silver City’s Ripe ’N Juicy, the intensity lies with fruity hops. This beer has huge hop character. It’s made with Citra, Azacca and Amarillo, which contribute assertive tropical aroma and flavor. The Azacca taunts the nose with grapefruit, pineapple, and orange. The Amarillo are especially noticeable for their strong sweet orange flavor. Ripe ’N Juicy gains its signature dense, hazy body from the reaction of a specialized yeast strain with a hearty dose of flaked wheat. A massive canvas for a brilliantly fruity hop experience.

Let’s Break It Down: 8% ABV • 75 IBU • Ripe ’N Juicy is brewed with Pilsner malt, flaked wheat, Citra, Amarillo, and Azacca hops • Brothers Steve and Scott Houmes were restaurateurs until September 1996 when they added brewmaster “Big Daddy” Don Spencer to their lives. The they opened Silver City Brewery in Silverdale, Washington. In May of 2010, the brothers moved their brewery operations to a new, 7,600 square foot production facility and taproom in Bremerton.

We didn’t see many rocks, and almost no candy as Clif Bars don’t count, but we did see tons of off-road vehicle and mountain bike riders during our ascent of Rock Candy Mountain in the Capitol State Forest. We followed the well-maintained North Rim Trail into the woods before joining the Rock Candy Mountain Trail. After stepping over streams, wandering under a thick forest, and crossing a few logging roads trail steepens and swtichbacks as it nears the top of Rock Candy Mountain. Because of recent logging near the summit, views to the north are wide open.

Back at the trailhead, we cracked opened the 22-ounce Ripe ’N Juicy and, via the Internet, discovered Rock Candy Mountain is the third-highest peak in Capitol State Forest. We laughed as it wasn’t a rocky hike. We knew to bring sunglasses — not because of the weather but because most Silver City beers are packaged in bright neon colors, including Ripe ’N Juicy.

From I-5 in Olympia, exit onto US 101 north. After 6 miles, merge onto US 8 for another 4.7 miles to Rock Candy Mountain Road. Turn left and proceed to the trailhead.