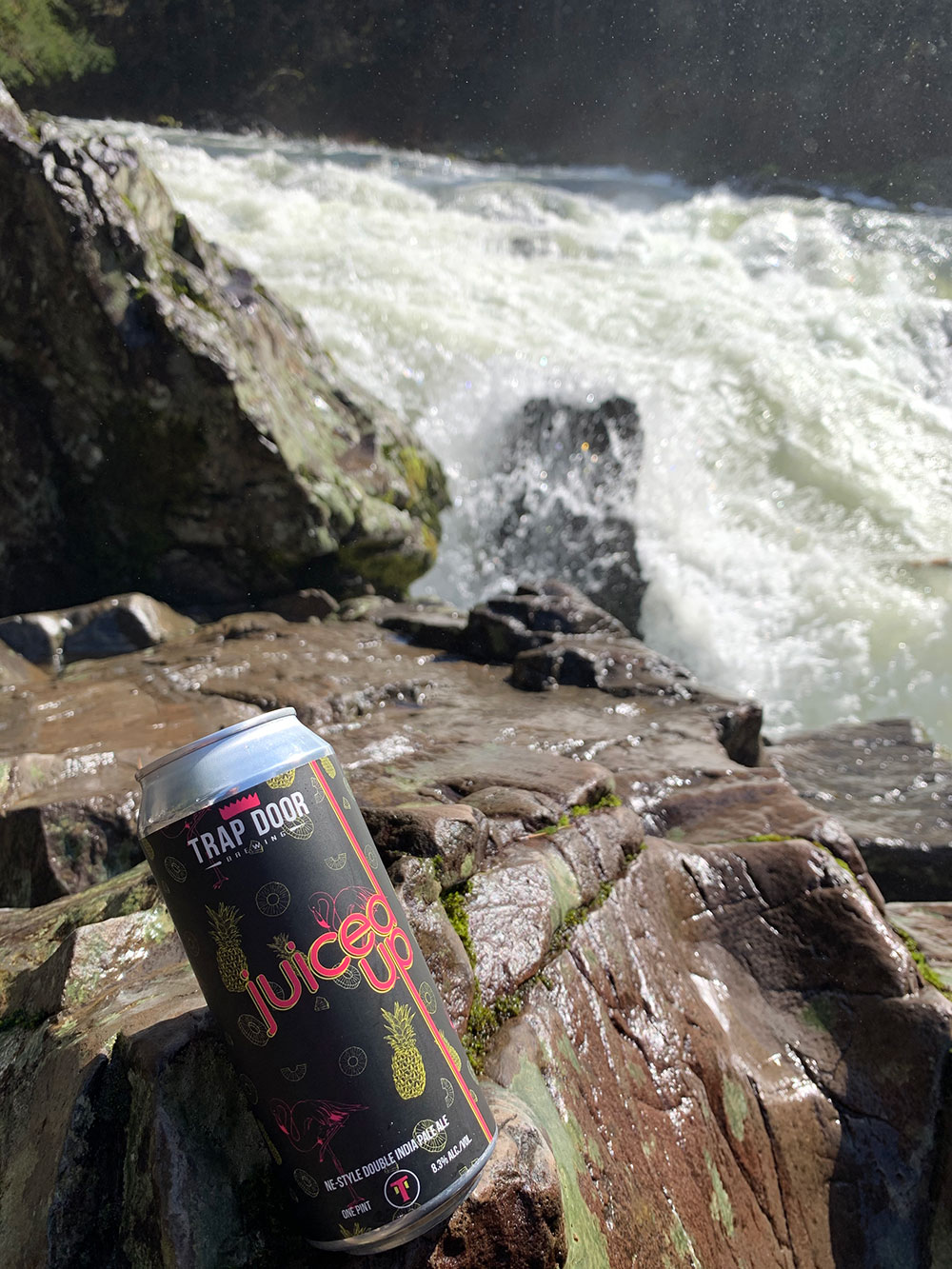 Trap Door Brewing Juiced Up was nominated as a fourth seed in the Southern Washington Region of the Peaks & Pints Tournament of Beer: NW Double IPAs, which will begin April 2, 2021. The tournament bracket will be released soon. Since we’re not touring breweries to preview the tournament this year, we enjoyed the Peaks and Pints: Trap Door Juiced Up and Moulton Falls Trail pairing.

Trap Door’s Juiced Up hazy double IPA is double dry hopped with Citra, Mosaic, Simcoe, and Strata, the last hop being a multi-layered, one-stop-shop hop crafted by Oregon State University. Strata offers flavors of pineapple, as well as grapefruit, passionfruit and pine on the tongue. Drinking Juiced Up is like drinking pineapple juice straight from the can.

Let’s Break It Down: 8.3% ABV • Bryan Shull, who left a 25-year career in renewable energy engineering to start a brewery with his two sons, Zakary and Zane Singleton, opened the 15-barrel Trap Door Brewing in the Uptown neighborhood of Vancouver October 2015 because he loves beer and the community of people that make up the brewing industry. • In October 2020, Kyle Larsen replaced Zane as head brewer. No doubt Larsen can continue the Trap Door medal-winning ways as he has a long pedigree, beginning in 2007 brewing at Full Sail, followed by head brewer status at Double Mountain, then head brewer at Siren Brewing in Reading, England. 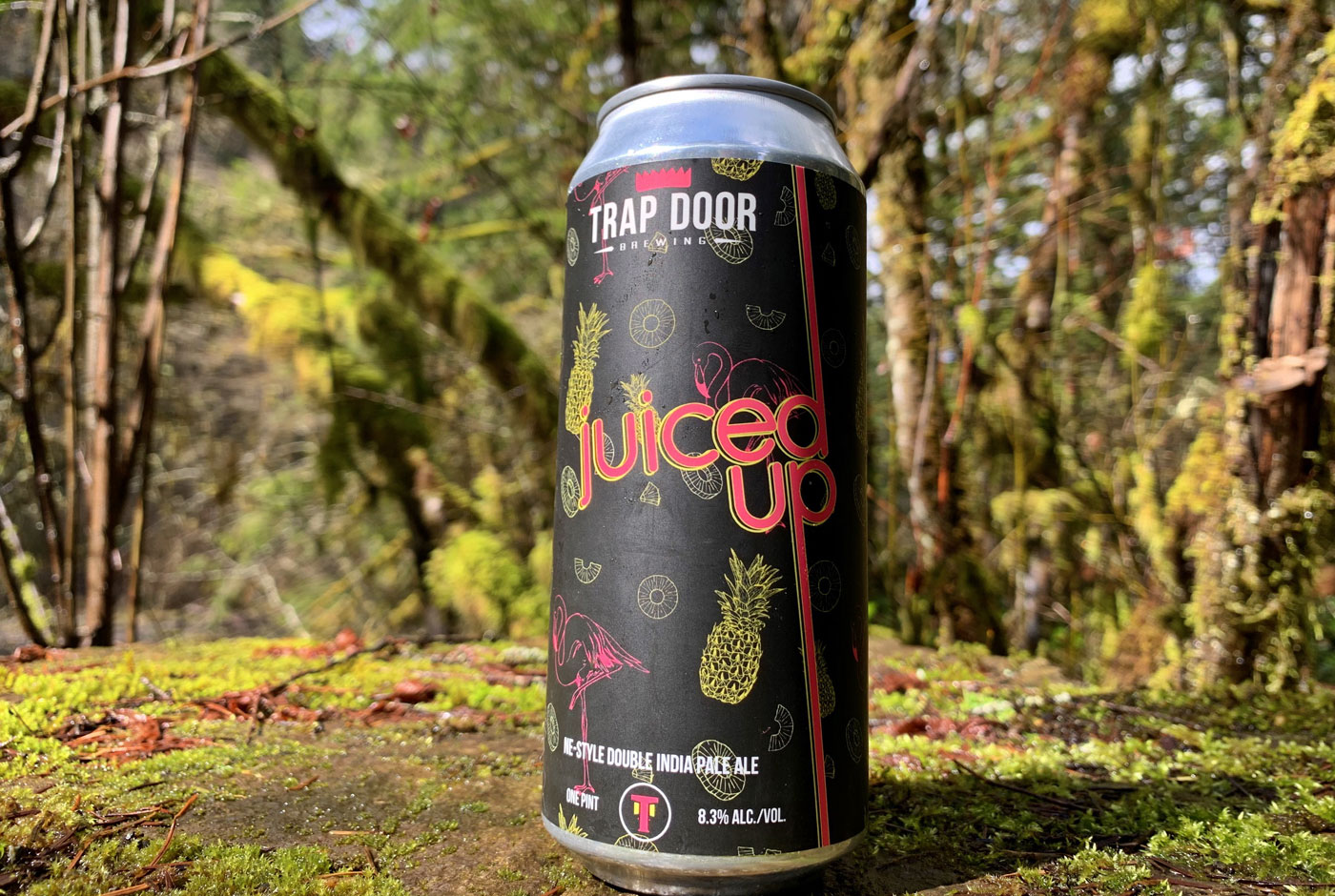 For a nice riverside ramble, head up to the Moulton Falls Trail, northeast of Battle Ground, Washington. The converted rails to trails grade runs adjacent to the rushing waters of the East Fork Lewis River, under a lush forest canopy. The flat topography coupled with a soft, crushed gravel surface make for a very pleasant outing in the woods. The trail is wide, well maintained, and fairly level. It parallels the Chelatchie Prairie Railroad and follows the North Fork of the Lewis River about 75 feet above the river for an almost constant view of the river through the Alder, Cedar and Douglas fir trees.

Back at the trailhead, we divvied up the Juiced Up and discussed the tire spikes. Both the tiny parking lot and the overflow parking lot near the junction of Lucia Falls Road with Sunset Falls Road has tire spikes to discourage driving in through the exit driveway. It seems extreme. We also agree folks should a photo of the map at the trailhead as there are multiple paths in this area. We were amazed this area of Clark County receives more than 70 inches of precipitation each year and the understory of plants reflects this near rainforest climate. The trail climbs up to a wood arch bridge over the river, passing Moulton Falls. The bridge was built in 1976 and is 56 feet above the emerald-colored river. We learned Trap Door owner Bryan Shull’s grandfather and father worked at and retired from Great Western Malting Company located at the Port of Vancouver USA, which makes Trap Door Brewing a fourth-generation Vancouver beer family-owned business.

Take exit 11 off I-5 and follow WA-502 East to Battle Ground. Turn left at the intersection with WA-503 North and head north for 5,5 miles to Northwest Rock Creek Road. Turn right and drive east. The Moulton Falls Regional Park is on the right about 8 miles from WA-503. Go past the small parking lot and continue to the large parking lot which is just before the intersection with NE Sunset Falls Road.