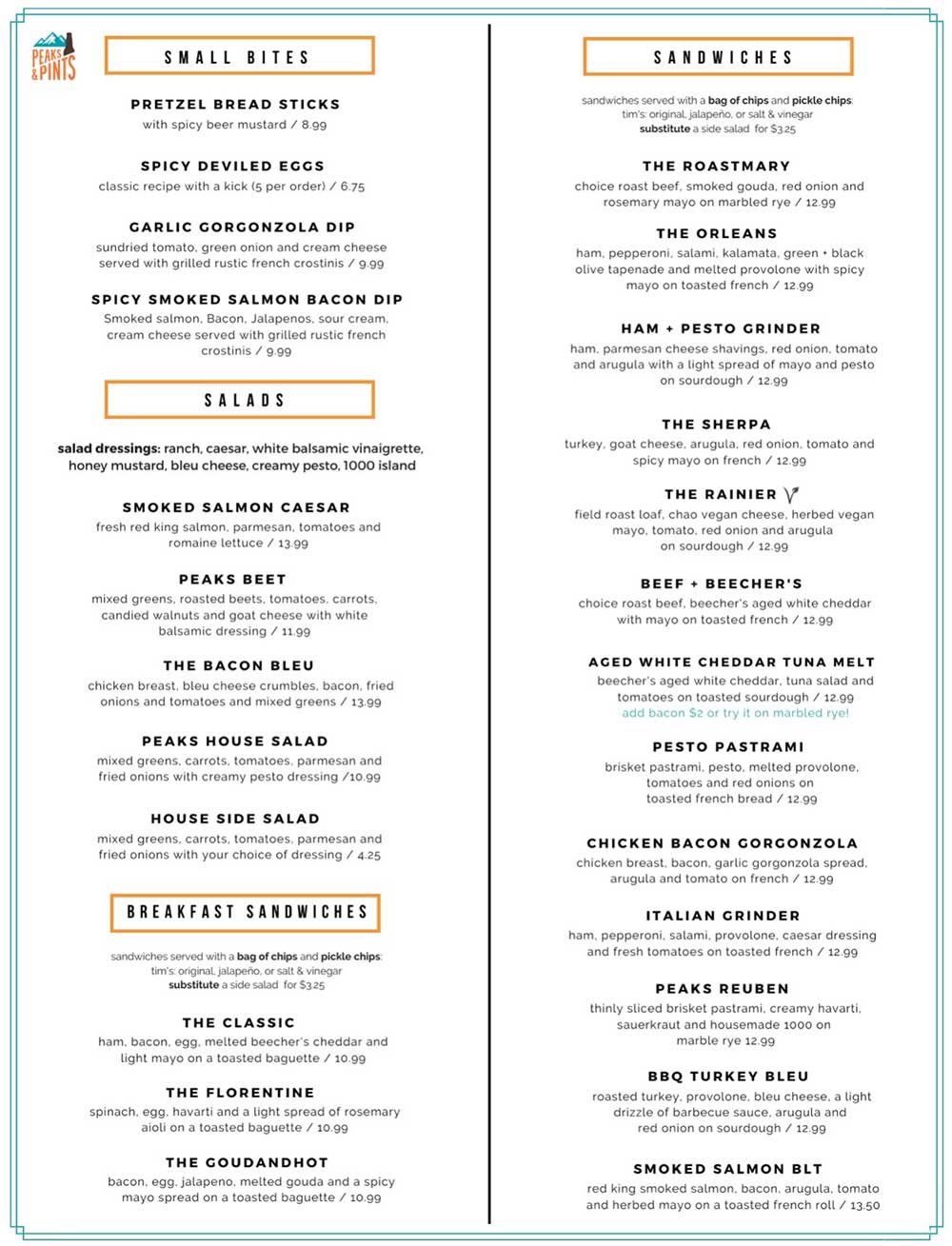 Picture this: you go through a mental checklist while deciding where to meet friends after work. A great beer? That’s a must. Some good goes-with-beer food? That’s Peaks and Pints in Tacoma’s vibrant Proctor neighborhood. Peaks and Pints co-founders Robby and Justin Peterson — owners of Peterson Bros. 1111 on Hilltop Tacoma and The Valley near Tacoma’s Amtrak Station — created the Peaks and Pints food menu, which includes their Tacoma sandwiches, salad and appetizer talents.

Peaks and Pints sandwiches are served with a bag of Tim’s chips — Original, Jalapeño or Salt & Vinegar — and pickle chips. You may substitute a side salad or daily soup special for $2.25.

Beer geeks and craft brewers tend to turn their noses up at brown ales because they lack the extreme flavors and hoppiness that is fashionable, but these are tasty beers that pair well with many different foods. The dark and rich notes of chocolate and coffee complement Peaks and Pints’ roast beef and smoked Gouda sandwich. It’s simple, hearty and delicious.

Peaks and Pints’ sandwich, The Orleans, is a twist on a New Orleans’ muffuletta, which is as twist on an Italian sub. Our hearty sandwich is served on a soft, herb French roll and liberally filled with ham, pepperoni, salami and melted provolone. The ingredient that really sets this sandwich apart is the Kalamata/green and black olive tapenade.

Beers are soured by introducing acidifying bacteria (Lactobacillus and Pediococcus being the most common) to fermenting beer. Wild beer is generally used to describe any beer that displays the earthy characteristics of Brettanomyces yeast strains regardless of whether the beer is a light golden ale or a strong dark stout. Often these styles receive all three of the bacteria to blend a funky, sour character that cause beer geeks to freak out. A sour beer will play up the tartness from the olives and cut the fattiness of the meats.

Ham, Parmesan cheese shavings, red onion, tomato and arugula with a light spread of mayonnaise and pesto on sourdough bread

Goat cheese has a distinct, tart, sweet and earthy flavor. It pairs well with IPAs and saisons, but Peaks and Pints grabs a pilsner when we sit down with The Sherpa. Pilsner might be the most versatile food beer, with hops being able to cut through the spicy mayo and enough bubbles to cleanse the palate after the goat cheese. When in doubt, grab a pils. 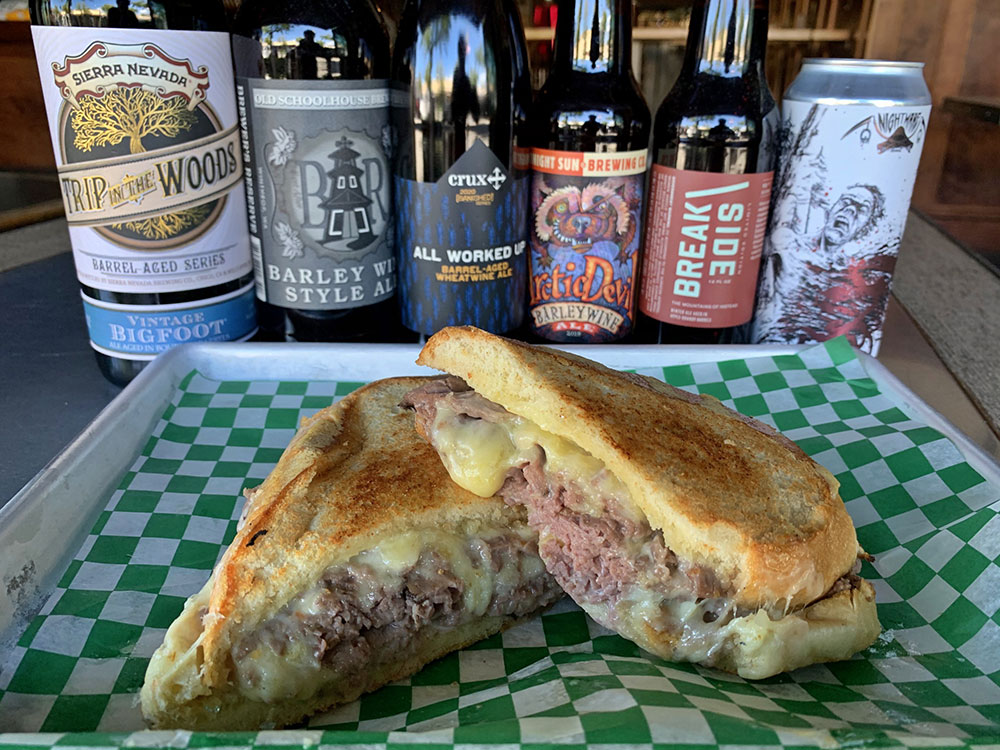 Barleywines make incredible companions for cold evenings. Their potent alcohol content gives them the ability to age for years in a cool cellar, and once a barleywine has reached the peak of its complexity, it is a viscous, complex treat with lots of caramel and toffee notes. Beecher’s Cheddar’s salty nuttiness stands up well with the strong malty stone fruit flavors of barleywines. Though the taste of the cheddar survives the blast of liquid complexity, it changes with crystalline sweetness now dominating.

At first, you might think blood orange IPAs are too big and would overpower this sandwich, but once all the components are together, they complement each other quite well. The IPAs are able to stand up to the tuna seasonings and aged cheddar and something about the clean orange taste matches nicely with the flavors in this sandwich.

Eastern European and Jewish immigrants brought over the savory pastrami sandwich when they settled in New York City, and it’s still loved today. The meat is brined, smoked, boiled and steamed, then seasoned with garlic, coriander, black pepper, paprika, cloves and mustard seed. After all that, it’s combined with pesto, melted provolone, red onions and tomato on French bread, at least it is daily at Peaks and Pints.

With all of those powerful seasonings, you’ll need a more pungent beer like an IPA. The bitterness of an IPA won’t get lost amongst the liberally seasoned and smoked pastrami and the hop punch stands up to the herbaceous bite. Citrusy IPAs will quench your thirst after the salty pastrami.

Although the origins of the Reuben sandwich are unclear, the earliest references to it in print are New York-based. According to one account, it was created by Arnold Reuben, the German owner of the now defunct Reuben’s Delicatessen in New York City. Regardless of its origin, it’s delicious and made even more so at Peaks and Pints, with thinly sliced brisket pastrami, creamy Havarti, sauerkraut and housemade 1000 on marbled rye bread.

It’s an outstanding sandwich on its own, but it gets even better when paired with a drink that enhances all the ingredients, such as a pungent beer like an IPA. The bitterness of an IPA doesn’t get lost amongst the liberally seasoned and smoked deli meat, rye bread and sauerkraut. The citrusy finish from the beer will quench your thirst after the salty pastrami.

Between the roasted turkey meat, blue cheese crumbles, provolone and barbecue sauce, Peaks and Pints’ barbecue turkey sandwich is packed with a powerful punch of flavor. Add red onion, arugula and toasted sourdough and this sandwich screams for a stout.

Stouts feature barley malt roasted like coffee beans, and the flavors created in the process — chocolate, coffee and even smoky char — mirror many flavors present in barbecue sauce. These “flavor bridges” create a pleasing harmony that can elevate both the sandwich and the brew and even reveal subtle flavors in one (or both) that are easy to miss on their own. The blue cheese’s sharp flavor is a better foil for the roastier notes in a stout, too.

Smoked salmon has a distinct flavor that pairs best with a porter. Normally it is not recommended to pair a heavy beer such as a porter with a lighter dish such as seafood, but smoked salmon has an intense aroma that can match the dark beer. Plus, the roasted flavor of a porter compares with the smokiness of the salmon and the bacon.

Every day 11 a.m. to 2 p.m.
Peaks and Pints breakfast sandwiches are served with a bag of Tim’s chips — Original, Jalapeño or Salt & Vinegar — and pickle chips.

Spinach, egg, Havarti and a light spread of rosemary aioli on a toasted baguette

PEAKS CHARCUTERIE BOARD (ON HOLD)

Classic recipe with a kick (5 per order)

Mixed greens, carrots, tomato, Parmesan and fried onions with your choice of dressing

Tacoma’s own “Bite Me” cookie for Peaks and Pints with Belgian chocolate, walnuts and pure cane sugar