Peaks and Pints: Rainy Daze Only The Tip and Olympic Discovery Trail

Peaks and Pints: Rainy Daze Only The Tip and Olympic Discovery Trail

Rainy Daze Brewing Only The Tip was nominated as a 12th seed in the Northern Washington Region in the Peaks & Pints Tournament of Beer: NW Double IPAs, which will begin April 2, 2021. The tournament bracket will be released soon. In the meantime, we suggest you enjoy Peaks and Pints: Rainy Daze Only The Tip and Olympic Discovery Trail combo with your friends.

Hops: Rainy Daze Only The Tip

“This is my prized beer to date,” Rainy Daze Brewing Co. founder and head brewer Mike Montoney​ stated in 2014 when he emerged from his then small Kitsap County brewery holding high his Only The Tip double IPA. Montoney dumps spruce tips from Sitka, Alaska into each batch, giving the IPA fruity and piney characteristics of the spruce. It’s dank, for sure. Heavy and thick, too. Seven years later from its first release the 9.9 percent ABV is still well hidden. 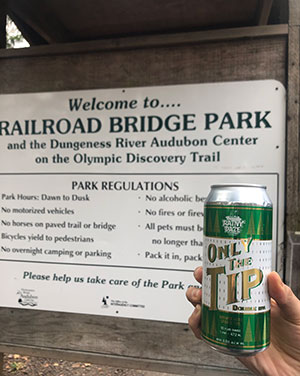 Olympic Discovery Trail is a 130.3 mile moderately trafficked point-to-point trail through farms, fields, and historic towns with views of the snowcapped Olympic Mountains, the Strait of Juan de Fuca shoreline, peaceful lakes and forested foothills. Sequim is situated right in the center of the Trail that stretches from Port Townsend to Port Angeles. Currently, 40 miles of the trail are paved connecting the path from just east of Sequim to Port Angeles, which crosses the Dungeness River over the Railroad Bridge trestle at Railroad Bridge Park.

Whatever section you hike along the Olympia Discovery Trail, be sure to divvy up Rainy Daze Only The Tip double IPA after and discuss all the discoveries. Discuss how the Milwaukee Railroad transported timber and passengers between Port Townsend, Port Angeles, and towns and logging railways further west over the Railroad Bridge from 1915 through 1980. Discuss how the Olympia Discovery Trail tends to offer cooler hikes in the summer than heading east from Seattle. Express concern about the dickhead Golden Retriever in the Piedmont area of the trail. Ponder if Rainy Daze Brewmaster Montoney still works 16 hours days.

The official eastern terminus of the trail is at the ferry dock in the town of Port Townsend. At its western terminus the trailhead is officially located at the beach in La Push. There are many access points of the Olympic Discovery Trail; visit olympicdiscoverytrail.com for more details.