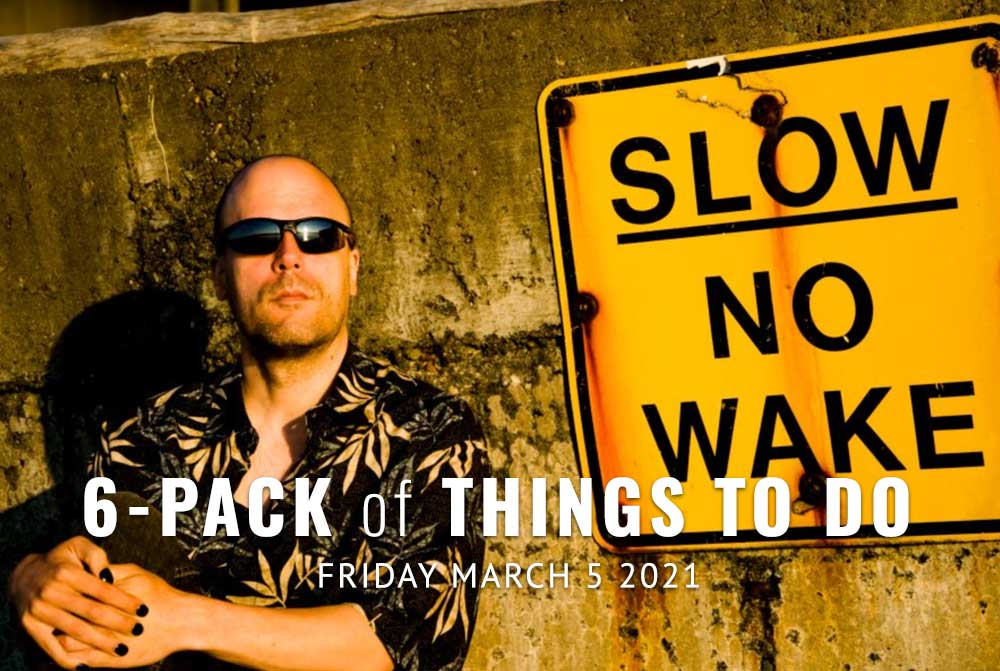 Today, you can watch Steve Stefanowicz LIVE, join a freeform dance experience, stream films, chat with the cast of A Chorus Line, and drink delicious beers from AleSmith Brewing. Our 6-Pack of Things To Do highlights at some of the best things to do around town, plus a friendly reminder that masks and social distancing are still the way to go.

MUSIC: In the days before adulthood consumed Steve Stefanowicz, the “Human Jukebox” would perform seven days a week. Blind at birth, proficient on the guitar at 15, performing solo and in his band Blind Ambition, Stefanowicz could be seen nightly through the 1980s and 1990s, performing any of the 1,000 songs he memorized. When not in a club, he was on stage with Lou Rawls, Sam Andrews’ Holding Company, Blue Spark, Junkyard Jane, The Groovin’ Higher Jazz Orchestra, jazz guitarist Michael Powers, Savoy Brown, Kansas and Elvin Bishop. To this day, the most amazing version of “Sympathy for the Devil” we have ever seen was when Stefanowicz perform it at an open jam inside Cole’s in Ruston. Tonight, he performs LIVE at the Kimball Coffeehouse. 7-9 p.m., Kimball Coffeehouse, 6659 Kimball Dr., Gig Harbor, no cover, photo courtesy of Facebook

BEER FLIGHT: As it does at the beginning of every year, RateBeer, one of the world’s leading resource for beer reviews along with BeerAdvocate and Untapped, unveiled its much-anticipated list of the 100 best breweries in the world. AleSmith Brewing ranks sixth. But for AleSmith, an artisanal brewing company born out of the San Diego craft beer boom in the 1990s, it’s hardly a new accolade. AleSmith has been consistently ranked on RateBeer’s list of best breweries in the world for years. The brewery focuses on Belgian and British brewing styles, barrel-aging, and recently hazy IPAs. AleSmith has grown exponentially over the past decade, and remains one of San Diego’s best known, most highly regarded beer brand. They ship beer to 12 states, five foreign countries, and throughout California. AleSmith is celebrating its 25th year in business and their state-of-the-art brewery occupies a 109,942 square-foot facility. Today, Peaks & Pints offers AleSmith as our to-go flight — a flight we call Peaks and Pints Pilot Program: AleSmith On the Fly. 11 a.m. to 10 p.m., 3816 N. 26th St., Basecamp Proctor, Tacoma

FILM: Short films have long been the first step into filmmaking for most directors, and getting those films into festivals has always been an important component of that step. This has changed somewhat in the YouTube era, but there’s still a lot to be said for the curation aspect of festivals. Seven cheers to the 8th Destiny City Film Festival and their After Dark film shorts program! The local film festival offers seven shorts for mature audiences with a total running time of 74 minutes, including The Internet Kills, an Euphoria meets The Ring. When Victoria and her friends discover an app that kills, they accidentally unleash something truly evil. Pair the shorts with a Ex Novo Brewing Myriad Reflector from the Peaks & Pints cooler.

THEATER: The cast from Tacoma Little Theatre’s 2020 production of A Chorus Line will reunite to share their “one singular sensation” and answer questions. The Chorus Line was one week into its four-week run when we had to shut down due to COVID-19. “Directed and choreographed by Eric Clausell, Tacoma Little Theatre’s production of A Chorus Line features an enormous cast of familiar faces in the South Sound theater scene, as well as some newcomers — all of whom superbly navigate a seemingly endless series of dance routines with grace and alacrity,” wrote Rev. Adam McKinney in the Weekly Volcano. “The plot, such as it is, concerns a group of dancers auditioning to be in a Broadway show, with each prospective dancer eventually telling the story of their life to a mostly unseen director (Micheal O’Hara). Because of this structure, there really are no proper main characters, as each one gets their moment to shine.” Log on, ask questions or just sit back and hear about their experiences. 7-8 p.m., TLT Castmates Zoom Room, free

FILM: Elizabeth Lo’s documentary Stray follows the everyday life for a street dog named Zeytin, a weathered mixed breed who ekes out an itinerant living – along with thousands of others just like her – in the hustle and bustle of metropolitan Istanbul. Istanbul is home to 15 million people and some 130,000 stray dogs. For more than a century, it struggled to get a handle on its stray dog problem. It still struggles. The Grand Cinema streams Stray in their Virtual Screening Room. Pair the film with Top Rung Brewing’s My Dog Scout Stout from the Peaks & Pints cooler. $12 rental, photo courtesy of Magnolia Pictures

DANCE: If you’ve never entertained the notion of “getting high on life,” well, you may want to reconsider your stance. Ecstatic Dance Tacoma promises that at their freeform sober two-hour dance party, you’ll move into a meditative state, tapping into parts of yourself that are concealed during the everyday, and blurred during happy hour. Tonight, their QUIETWYAY will offer intrinsically unique DJ sets, cozy tea lounge, tarot, and areas for meditation and yoga. Join eclectic electric, soul, house, and bass with a closing sound bath. 8-11 p.m., The Space, 728 Broadway, Tacoma, $22, RSVP only at info.ecstaticdancetacoma@gmail.com.