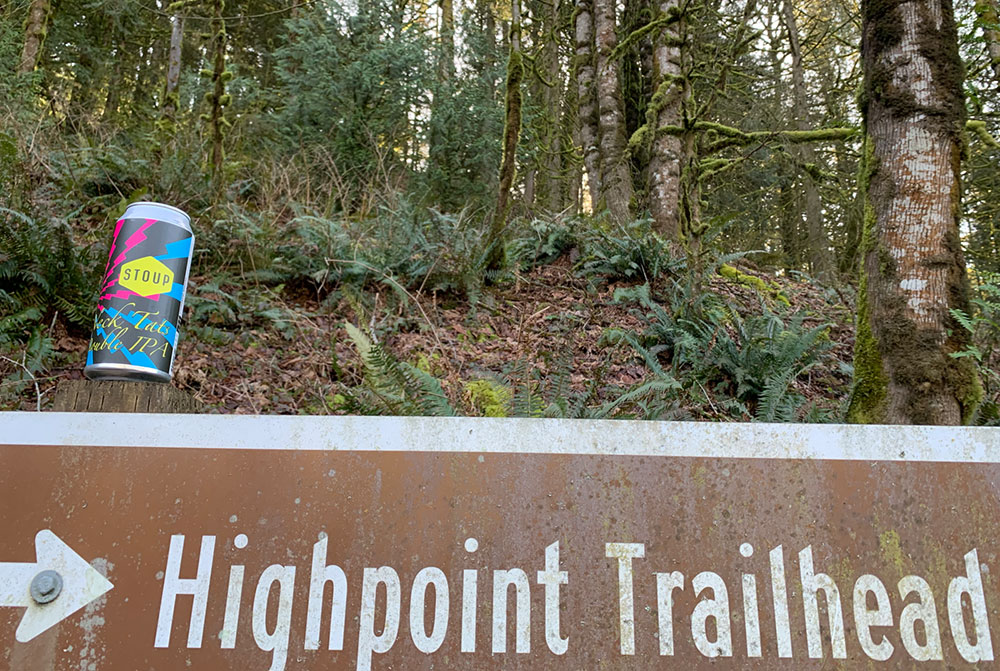 Stoup Brewing Neck Tats Double IPA was nominated as a third seed in the Northern Washington Region of the Peaks & Pints Tournament of Beer: NW Double IPAs, which will begin April 2, 2021. The tournament bracket will be released soon. Since we’re not touring breweries to preview the tournament this year, we enjoyed the Peaks and Pints: Stoup Neck Tats and High Point pairing.

Let’s Break It Down: 8% ABV • 75 IBU • Stoup Head Brewer Brad Benson graduated from Gonzaga University with a B.S. in Chemistry and has been crafting beer for more than 26 years • In the summer of 2017, the brewery opened “Upstairs at Stoup,” which is an 800-square-foot expansion of the 3,000-square-foot taproom and brewery to include event space upstairs. • Summer of 20198, Stoup expanded into a 6,000-square-foot space behind its current brewery.

Tiger Mountain State Forest in the Issaquah Alps is a 13,745-acre natural preserve that incorporates the West Tiger Mountain Natural Resources Conservation Area. Heading out from the mile High Point Trail, the Tiger is your oyster. Head west and north on the Tiger Mountain Trail, making a loop from the myriad of trails available to you, or head south on the TMT and explore the trails heading off to the east side of the mountain. West Tiger 3 Trail off High Point is the most accessible and manicured mountain trail, which makes it the busiest, too. West Tiger 3 gently slopes up for a 2,000-foot gain, with steeper grades near the top, which offers for a tree line view of Mount Rainier and the Cascades.

Let’s Break It Down: 2-mile roundtrip • High Point highest point 1,150 feet • There are 22 moderate trails in Tiger Mountain State Forest ranging from 0.8 to 11.9 miles and from 134 to 2,995 feet above sea level • It can get crowded on the weekend so plan accordingly — you will need a Discover Pass. • All Tiger Mountain trailheads are day use only.

Back at the High Point Trailhead after about 10 miles of exploration, we divvied up Stoup’s Neck Tat as we discussed our day wasn’t hard but it isn’t easy either as we hiked old logging roads through the rejuvenating forest. We discussed our favorite Tiger Mountain hike is Poo Poo Point at dusk when the light begin to turn on below. We agreed it’s best to start at 6 a.m. because the parking lot is full at 8. We laughed when we agreed Stoup Sales Executive and Mountain Explorer Dexter Chanhsomphou has the best laugh in craft beer.

From Seattle, drive east on I-90 to exit 20 (High Point). At the end of the off ramp turn right. Within a few yards you will see a gated road on your left. Park near the gate or along the roadway.