Peaks and Pints: Seapine Rainbow Suspenders and Far Side 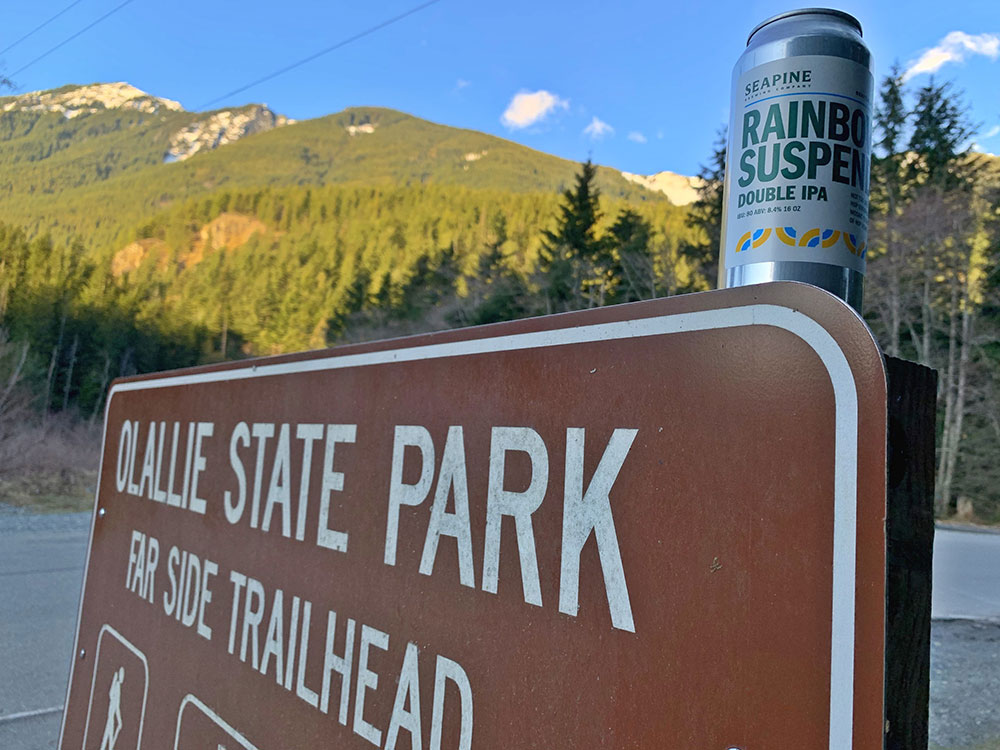 Peaks and Pints: Seapine Rainbow Suspenders and Far Side

Seapine Brewing Rainbow Suspenders was nominated as a 15th seed in the Northern Washington Region of the Peaks & Pints Tournament of Beer: NW Double IPAs, which will begin April 2, 2021. The tournament bracket will be released soon. Since we’re not touring breweries to preview the tournament this year, we put on our rainbow suspenders and paired Peaks and Pints: Seapine Rainbow Suspenders and Far Side Rock Climbing Area.

This doesn’t have anything to do with Seattleite comic artist Gary Larson’s The Far Side (although he did draw a panel with hungry bears eyeing a climbing anchor outside their clifftop cave saying, “We’ll be eating in tonight”), the Far Side is actually one of three major climbing sub-areas off the Exit 38 ramp on the I-90 corridor east of Seattle. It is a collection of mostly bolted crags located on the north side of I-90, all surrounding and below Dirty Harry’s Peak. Far side offers rock climbers have access to six separate climbing areas that range in difficulty from 5.5 to 5.12c. There are a handful of trad lines and six multi-pitch options. Gritscone is located in the Far Side area with relatively easy routes, and it can be approached within 10-15 minutes from the parking area.

Let’s Break It Down: There are three main crags at Exit 38: Deception Crags, Mt. Washington, and Far Side. • Far Side Trailhead is in Olallie State Park located on western slopes of the Cascade Mountains in North Bend, Wash., which is home to Weeks Falls and Twin Falls, plus 2,500 acres of cliff formations and old-growth forest and six miles of hiking trails. • The Far Side Trailhead provides hikers and rock climbers access to trails and crags in the Middle Fork Natural Resource Conservation Area. Visitors may hike along the 4.25-mile Dirty Harry’s Peak Trail to the 4,680-foot summit. From atop Dirty Harry’s Peak, visitors may take in views of the Upper Snoqualmie Valley to the west and the Alpine Lakes Wilderness Area to the east

Back at the trailhead, we divvied up the Seapine Rainbow Suspenders double IPA and saluted Bryan Burdo who developed the Far Side climbing routes. We appreciated the southern exposure and good sunlight. We discovered the rock material is mostly metamorphosed basalt and gabbro. Robin Williams made rainbow suspenders a fashion trend when he wore them on Mork and Mindy in the 1970s. We made the “Nanu Nanu” hand gesture in his Williams’ honor. We sadly loaded our gear into our cars as the Far Side is situated in the Fire Academy Training area, so camping is not allowed.

Traveling east on Interstate 90, take Exit 38. Follow SE Homestead Valley Road staying briefly on Grouse Ridge Road before tuning into the Far Side Trailhead, which closes each day at dusk.