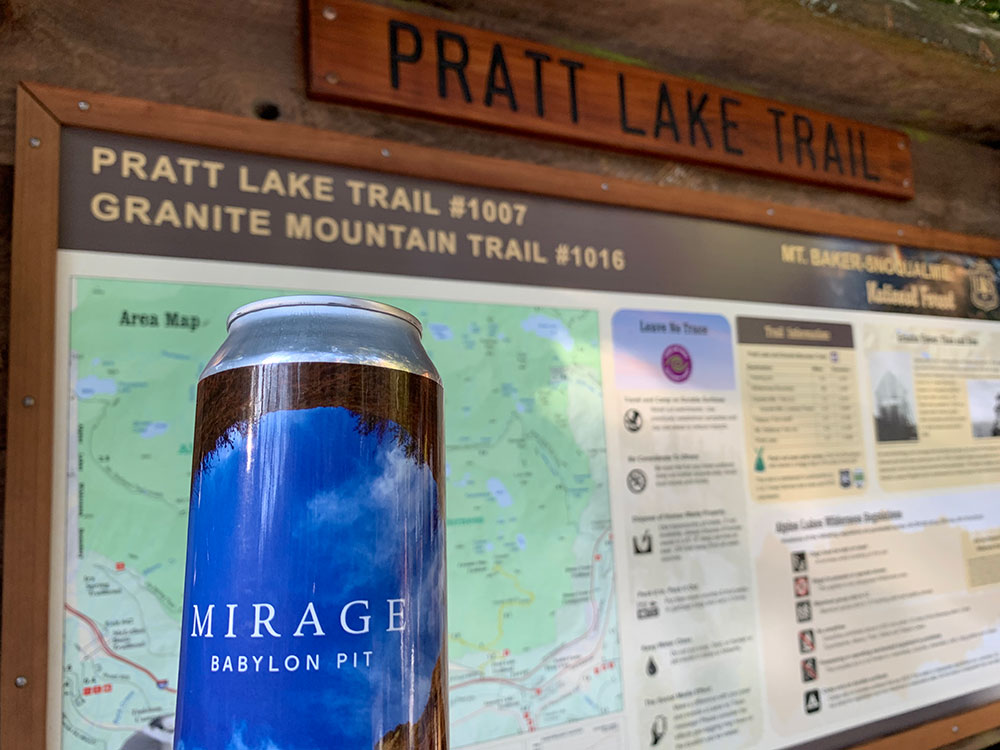 Mirage Beer Babylon Pit was nominated as a 15th seed in the Southern Washington Region of the Peaks & Pints Tournament of Beer: NW Double IPAs, which will begin April 2, 2021. The tournament bracket will be released soon. Since we’re not touring breweries to preview the tournament this year, we enjoyed the Peaks and Pints: Mirage Babylon Pit and Pratt Lake Trail pairing.

The Pratt Lake Trail has an award at its end: camping. We hiked through 5.5 miles of switchbacks — up in elevation in the first half and back down in the second half — when we reached the lake and the surrounding campgrounds. Since the weather was nice, we were treated stellar views of Mount Rainier and glassy lakes. The trail winds through a forest of ferns, mossy rocks and trickling streams, slowly gaining altitude as it climbs up the base of Granite Mountain. Roughly one mile into the trail, the Granite Mountain Trail forks off to the right. We continued left, following the arrow toward Pratt Lake. As we descended in switchbacks down the forested slope, we caught a glimpse of Pratt Lake within the basin. The campsites and toilet are located at the far end of the lake.

Back at the trailhead, we popped open the Mirage Babylon Pit and scanned the packed parking lot wondering how we’ll get our cars out. We discussed how first mile was crowded, but after passing a junction with Granite Mountain trail, the crowds dispersed. We also discussed the Olallie Lake Trail option at mile three with its three campsites at the lake and taking the Melakwa Lake Trail at the end of Pratt Lake Trail to Lower Tuscohatchie Lake as another camping option. As we sipped the delicious hazy double IPA, we remarked how Mike Dempster opened Mirage with spontaneously fermented saisons and sours but has become known for his hazy IPAs.

Head east on I-90 to exit 47. Turn left and drive over the freeway, then turn left at the T. Proceed to the nearby Pratt Lake-Granite Mountain parking area. Northwest Forest Pass and Alpine Lakes Wilderness Permit required — both available at the trailhead.