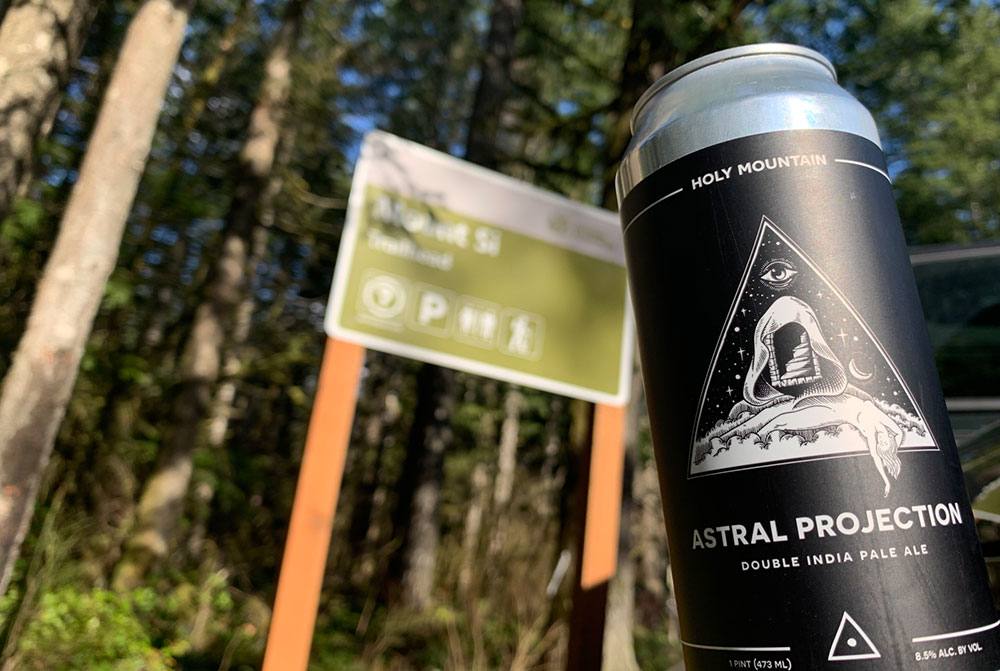 Holy Mountain Brewing Astral Projection double IPA was nominated as a number one seed in the Northern Washington Region of the Peaks & Pints Tournament of Beer: NW Double IPAs, which will begin April 2, 2021. The tournament bracket will be released soon. Since we’re not touring breweries to preview the tournament this year, we enjoyed the Peaks and Pints: Holy Mountain Astral Projection and Mount Si pairing.

There are more than 430 breweries in Washington state, but there’s only one Holy Mountain, which debuted in October 2014, and instantly blew up through word-of-mouth. Colin Lenfesty and Mike Murphy opened the Seattle brewery after gaining experience at Schooner Exact Brewing Co., Bainbridge Island Brewery and Westland Distillery. The two, well-respected local beer veterans gained quick respect for their outstanding farmhouse and sour barrel-aged beers. That’s all fine and dandy, but their juicy, unfiltered Astral Projection double IPA needs to be added to the “outstanding” list. If a pint of Astral Projection sits in a room you’ll know it immediately by its fruit splash aroma. On the tongue, it’s creamy, juicy hoppy, and fruity all the way.

Let’s Break It Down: 8.5% ABV • Brewed with Mosaic, Galaxy and Citra hops • Astral projection is a term used in esotericism to describe an intentional out-of-body experience that assumes the existence of a soul called an “astral body” that is separate from the physical body and capable of travelling outside it throughout the universe • This year’s batch was brewed for Holy Mountain’s sixth anniversary • Lenfesty and Murphy met working at Schooner EXACT. 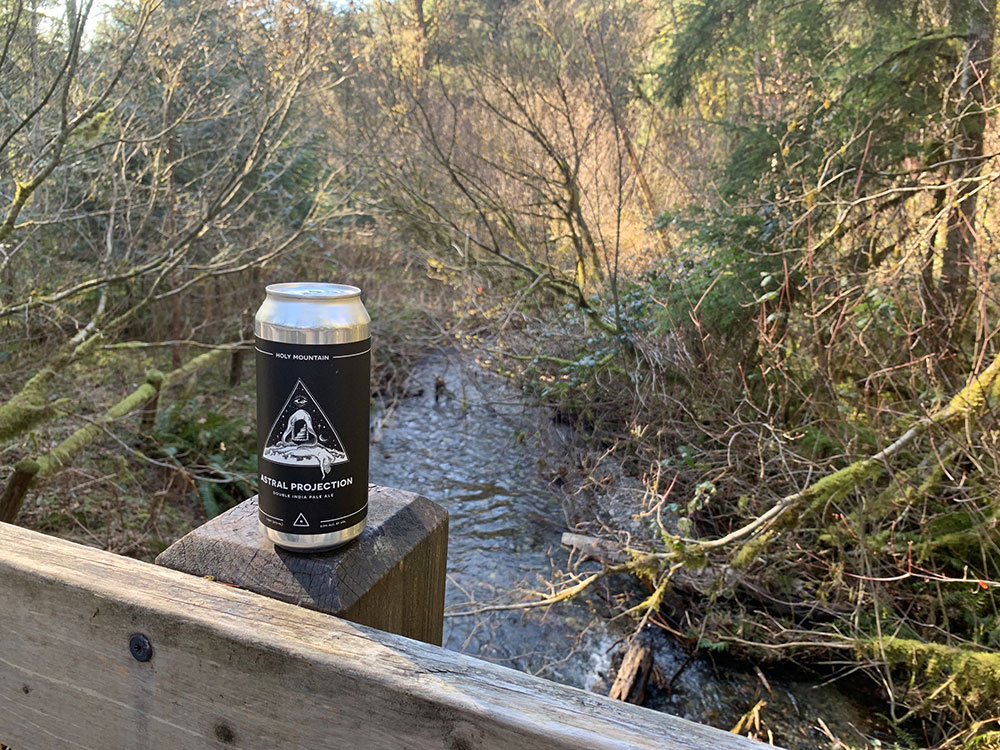 We can’t drive east on I-90 without glancing its way, and not because it’s hauntingly beautiful mountain, or its appearance in the opening credits of Twin Peaks. We stare at Mount Si because we know we’ll have to push past the crowds at some point every year. There’s no better training hike. Sure, we have to arrive to the parking lot before 7 a.m. to get a spot. Yes, it’s a strenuous 3,150-foot ascent in just 4 miles, and the hike down is monotonous causing a worse thigh-burn than up. Yet, it’s a great fitness gage with one of the best mountain views in the Puget Sound region. Most of the hike takes place on switchbacks, under the cover of trees, but the trail eventually opens to a rocky cliff covered in boulders, with a bonus hands and knees scramble to the “Haystack” summit.

Let’s Break It Down: 8-miles roundtrip • 3,150 feet elevation gain • 3,900 feet highest point • Snoqualmie Region – North Bend Area • Prior to being established as a state conservation area in 1977, Mount Si was home to mining and logging. 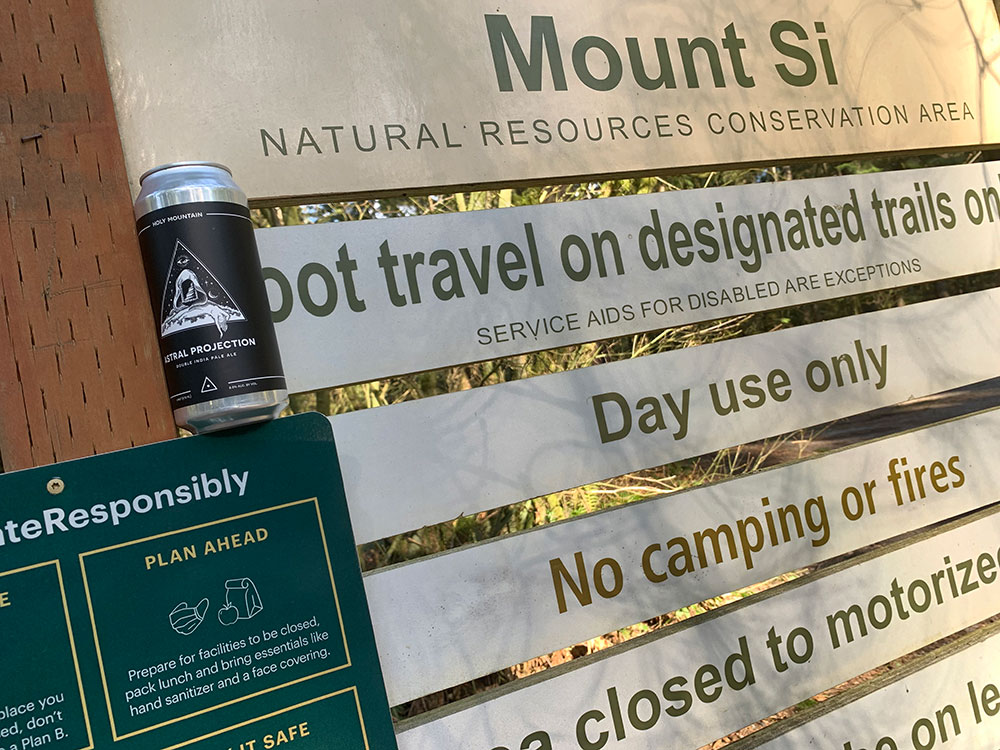 Back at the Mount Si Trailhead, we divvied up Holy Mountain Astral Projection and discussed the legend of Mount Si. According to the Snoqualmie people, Mount Si was the body of the moon, fallen to earth through the trickery of the fox and the blue jay. We read the tribute to pioneering state legislator Frances North who was responsible for protecting Mount Si. We voted Holy Mountain Brewing should have given a nod to Mount Si rather than the proclaimed Mount Rainier, although the brewery’s name was inspired by the stoner doom metal band Sleep’s 1992 album, Holy Mountain.

Drive east on I-90 to exit 32. Turn left onto 436th Ave SE. Follow 436th to its end at SE North Bend Way. Turn left. In three-tenths of a mile, turn right onto SE Mt. Si Road. Follow it 2.4 miles. Entrance to the trailhead will be on the left. A Discover Pass is required at trailhead.