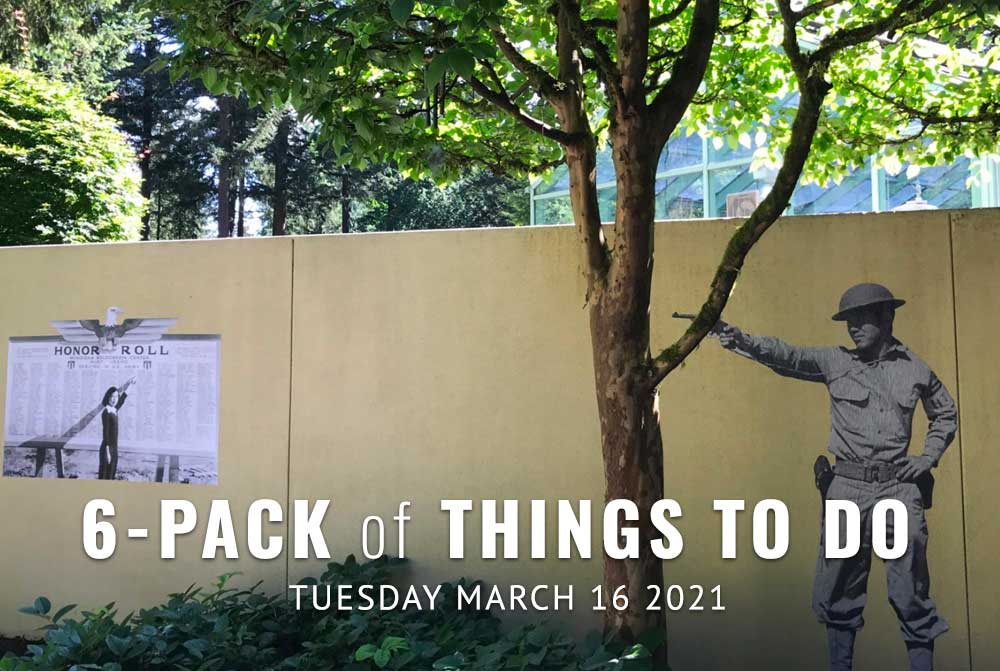 Peaks & Pints will be open both, physically and emotionally, from 11 a.m. to 9 p.m. for your pre- and post-funk 6-Pack of Things To Do sandwich, craft beer, cider and wine needs. Cheers!

ART: Pacific Bonsai Museum’s special exhibition for 2020 and 2021, World War Bonsai: Remembrance & Resilience, traces the cultural practice of bonsai in location and time — in Japan and in the United States, from the pre-war WWII period, through wartime, amid incarceration, and at peace. With bonsai, artifacts, documents, and photographs, the exhibition shares the little-known stories of the people who ingeniously and courageously cared for bonsai, shared their art, and spurred a flourishing, global practice despite overwhelming hardships. 10 a.m. to 4 p.m., Pacific Bonsai Museum, 2515 S. 336th St., Federal Way, $10, Art installation by Erin Shigaki

BEER FLIGHT: Nut brown ales may not get all the attention the hazies receive. However, the style certainly deserves credit for introducing many to craft beer. Nut browns celebrate the pleasures of malt, so much that they are often considered a gateway for nascent beer enthusiasts. They’ve certainly lured many away from a life of drinking homogenous macros. The nut brown ale is a style known for its maltiness, with little or no hop aroma. A British classic, nut brown ale contains nary a nut. The name is derived from this medium-bodied beer’s use of toasted malted barley as opposed to roasted malt — giving the style its telltale nutty color and flavor. Broader speaking, the brown ale style has been around for a long time, and is often attributed to having evolved from its darker cousin, the porter. Today, we offer a to-go flight of nut browns — a flight we call Peaks and Pints Pilot Program: Nut Brown On the Fly. 11 a.m. to 9 p.m., 3816 N. 26th St., Basecamp Proctor, Tacoma

ART: Museum of Glass’ Glass Break video series includes past clips of live glassblowing in the MOG Hot Shop with narration describing the process, defining terminology, and showing illustrations of the different techniques used. Today, Peaks & Pints suggest you learn about visiting artist Shawn Brigman’s tribal heritage and how he utilized his education in cultural architecture to create a Salishan Sturgeon Nose Canoe, and the Hot Shop recreated with glass.

MUSIC BUSINESS: Presented by Tacoma Public Library’s Digital Media Lab in a Zoom meeting, instructor John Hargis offers weekly forum designed for independent artists: musicians, vocalists and podcasters who are ready to make their voice known in the music and audio entertainment industry. Today, Hargis discusses what it takes to start your own record label — from the basics of setting up and acoustically treating a home studio space to addressing the technical side of studio recording. 6:30-7:45 p.m., Digital Media Lab Zoom

CLASSICAL: Classical Tuesday In Old Town presents Tacoma Poet laureate emerita Josie Emmons Turner and composer Gregory Youtz as they discuss and then premiere “Songs for the Spring of Waiting.”  Turner’s response to the pandemic shutdown a year ago is an explosion of poems that ranged from gardening to students to thinking about the poet Walt Whitman and his response to crisis. Youtz’ response to the poems is to set them to music as documents of this unique time.  Soprano Cyndia Sieden, mezzo-soprano Soon Cho, and pianist Oksana Ezhokina will premiere the five songs in a way that is also a document of these times- socially distanced and online. 7 p.m., Classical Tuesdays Youtube, no cover

FILM: Pennsylvania-born filmmaker Ephraim Asili’s feature-length debut, The Inheritance, is a vibrant, engaging ensemble work that takes place almost entirely within the walls of a West Philadelphia house where a community of young people have come together to form a collective of Black artists and activists. Based partly on Asili’s own experiences in a Black liberationist group, the film interweaves a scripted drama of characters attempting to work towards political consensus with a documentary recollection of the Philadelphia liberation group MOVE, which was the victim of a notorious police bombing in 1985. Stream the film in The Grand Cinema’s Virtual Screening Room. $12 rental