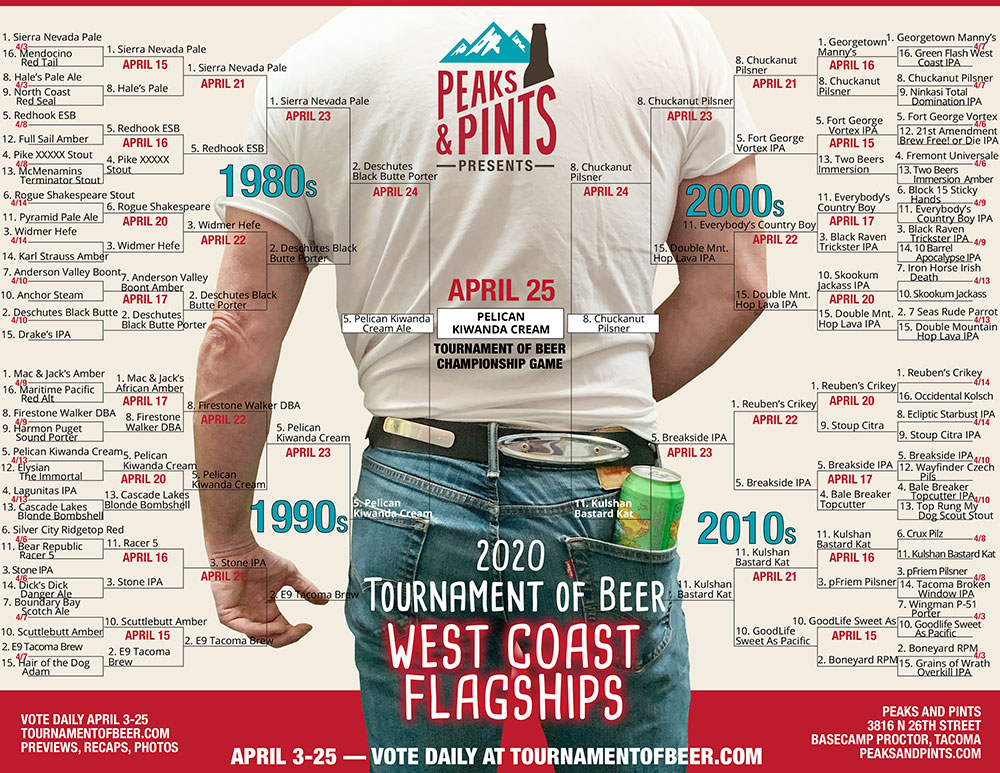 It’s a simple equation. Mill gain. Mix with water. Boil it with hops. Cool it. Add yeast then ferment. Condition and filter it. Drink. Mixed into those steps is where it becomes tricky. Choices need to be made. Temperature? Cascade or Fuggle hops? Oats? In those choices lies the path to flagship beer greatness.

Over the past three weeks Peaks & Pints pitted (and pitted out) 64 of the West Coast’s best flagships against one another in the mother of all reader-voted beer brackets, Tournament of Beer: West Coast Flagships. You’ve seen the carnage: No. 1 seeds fell, powerhouses butted heads and surprise beers made a run at the prize.

Yesterday, our Tournament of Beer: West Coast Flagships came to a close. The championship match pitted Pelican Brewing Kiwanda Cream Ale out of the 1980s and 1900s Region against Chuckanut Brewery Pilsner out of the 2000s and 20120s Region, and you, the voters, made your decision. It was Pacific City versus Bellingham, respectively. Oregon versus Washington, on the grandeur scale. For a bit of each brewery’s history and what was happening in the world when they were founded, check out the preview to this game here.

The day began with Pelican Kiwanda Cream ale gobbling up online votes for an early lead. Chuckanut Pilsner kept the game within a hop leaf’s length, once again, holding back its royalty ownership. Mid-afternoon, both flagship beers surge forward in vote totals when we posted an Instagram video of Chuckanut founders Mari and Will Kemper and Pelican co-founder and founding brewmaster, Darron Welch, thanking the public for voting them the best out of a field of 64 publically-nominated flagship beers from Washington, Oregon, and California in the last four decades.

Chuckanut received another boost after Western Washington University students began Zooming each other drinking the newly bottled Chuckanut Pilsner, adding an extra thrill with the WWU-provided images of the campus in their background images. “I’m drinking Chuckanut Pilsner next to Fisher Fountain!”

With an hour left in the online voting portion, Pelican unleashed the kraken, on their main Facebook photo they posted a video that included a pint of their Kiwanda Cream Ale shimmering in the sun on their beachside patio. People salivated into their masks.

Born at the Beach.

When the 8 o’clock bell chimed, and the online voting closed, Pelican had a 96-vote lead.

Congratulations to Pelican and Chuckanut for racing through the field of 64 West Coast flagship beers, and, in fact, being nominated into the tournament over hundreds of other flagship choices brewed in the three western states. Pelican, a brewery physically on the West Coast, will receive the Tournament of Beer: West Coast Flagships trophy to add to their vast collection of awards, as well as a permanent handle at Peaks & Pints through the summer.

So it’s official: Pelican Brewing Kiwanda Cream Ale is the winner of the Peaks & Pints Tournament of Beer: West Coast Flagships. Drink it up, West Coast.

Thanks to all the awesome folks who voted. You rock.