Peaks and Pints Pilot Program: Tournament of Beer Winners On the Fly

For the last five years Peaks & Pints has hosted the Tournament of Beer bracketed beer competition pitting 64 themed beers against one another in frothy head-to-head matchups voted online by craft beer enthusiasts. Every February, Peaks and Pints asks our patrons and the public to seed the tournament — meaning we poll people for their favorite beer under a certain theme, and thus determining seedings and matchups in the knockout bracket. The top 64 vote getters — the cream of the hops — compete at tournamentofbeer.com (forwards to peaksandpints.com) in April. Through online voting, craft beer drinkers pick daily winners until the best beer is crowned. It’s just like March Madness, only with way more alpha acids. The next Peaks & Pints Tournament of Beer will feature 64 American lagers brewed in Washington and Oregon battling in April 2023. In the meantime, Peaks & Pints presents a to-go flight of winners from each of the Tournament of Beer competitions — a flight we call Peaks and Pints Pilot Program: Tournament of Beer Winners On the Fly.

Peaks and Pints Pilot Program: Tournament of Beer Winners On the Fly 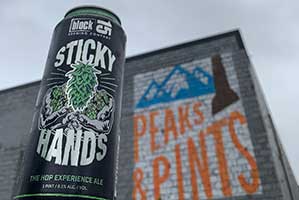 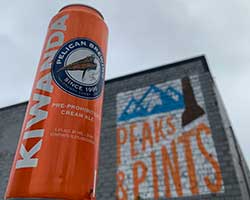 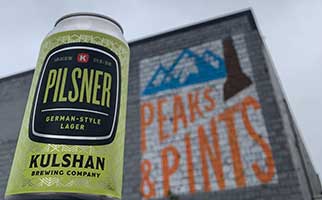 2019 TOURNAMENT OF BEER: NORTHWEST PILSNERS: For the past couple years, when a mention of Bellingham breweries awards comes up, there’s always a discussion that starts with “Kulshan, again?”, but even though the rest of Bellingham’s growing craft beer scene is pretty damn awesome, the stamp that Kulshan Brewing has put on Bellingham can’t be denied. The brewery’s German-style “Pilsner” grabbed a gold medal at the 2017 Best of Craft Beer Award and a silver at the 2018 Washington Beer Awards, no doubt for its traditional clean and bready malt flavors supported by herbal, floral and slightly spicy hop aromatics, and flavor from Hallertau Magnum, Hallertau Perle, and Spalt Spalter hops. With a medium body and a dry finish, Kulshan Pilsner beat Occidental Brewing’s Pilsner in the 2019 Tournament of Beer: Northwest Pilsners Championship Game. 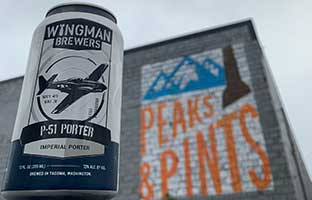 2018 TOURNAMENT OF BEER: NORTHWEST PORTERS: Wingman Brewers is known for their porters. It’s what they do. In fact, the P-51 was Wingman’s first real beer recipe. “It goes back to 2008 when Derrick (Moyer) and I were home brewing,” explains Wingman co-founder Ken Thoburn. “At the time, Lazy Boy Porter from Everett was my favorite beer around, so we tried to emulate that. The beer was initially made for a friend’s birthday and called Nalty’s Tall Order Porter since he’s a tall dude and asked us to make a Porter for his birthday party. The beer went over so well with our friends that it remains the only recipe we’ve never changed since Wingman started … with Washington-grown barley and Moxie valley hops.” P-51 was crowned the 2018 Tournament of Beer: Northwest Porters champion after it beat Rogue Ales Mocha Porter in the championship game. The P-51 Porter is a robust and clean-finishing porter that offers rich, malty flavors that highlight hints of chocolate, coffee, nuts, and smoke. 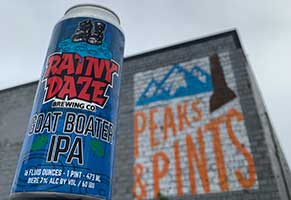 2017 TOURNAMENT OF BEER: WASHINGTON IPAS: Besides people riding bicycles munching on pickled fish and chanting “Børk! Børk! Børk” the other curious happening Rainy Daze Brewing noticed as it was moving into Sound Brewery’s formervfacility in Poulsbo was the frequent kayakers paddling on nearby Liberty Bay. Founder and head brewer Mike Montoney wanted to pay tribute to his new home so he named his latest IPA Goat Boater, which is slang for kayaker. And he’s paddling all the way to the bank. Goat Boater IPA was crowned champion in Peaks and Pints’ 2017 Tournament of Beer: Washington IPAs, our first tournament. With a winning combination of Amarillo, Mosaic, Centennial and Cascade hops, including a triple dry hop, this delicious IPA offers tropical fruit and dank flavors.