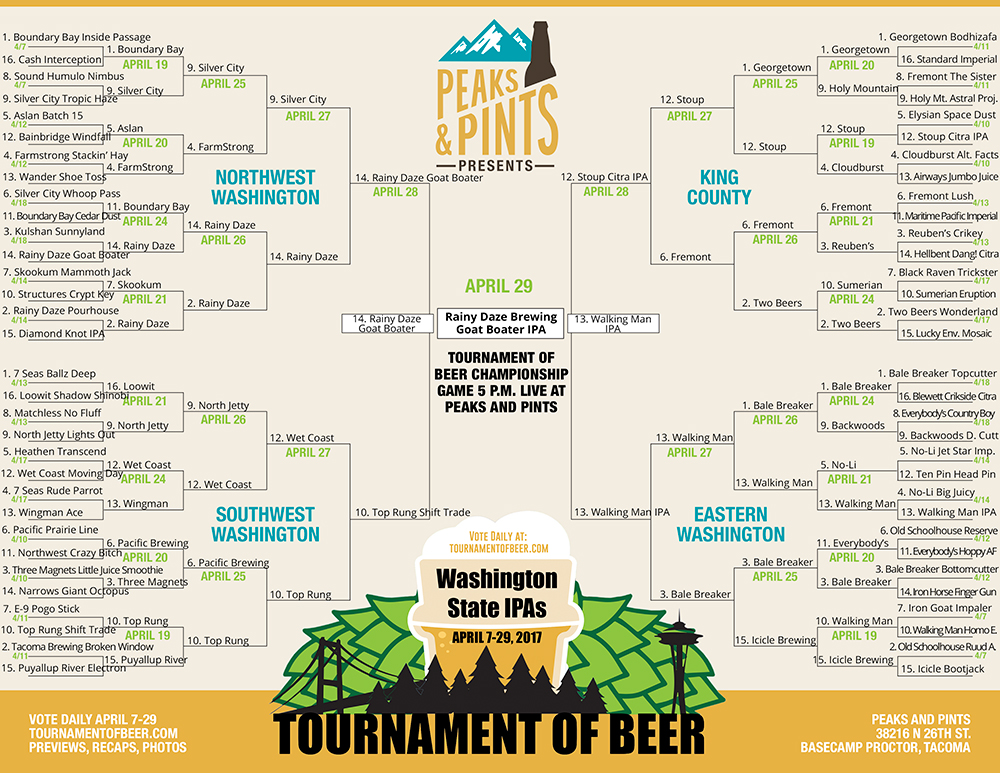 Tournament of Beer: Washington State IPAs recap — It’s a simple equation: Water plus grain, hops and yeast. But hidden within this simple formula is a universe of variety. Session or imperial? Clear or hazy? Tropical or dank? Washington state brewers who brew the classic India Pale Ale have choices to make. And in those choices lie the path to greatness.

In March 2017, we ask Washington state resident to nominate their favorite IPAs from their home state. Then, April 7-29, 2017 Peaks and Pints bottle shop, taproom and restaurant in Tacoma pitted the top 64 nominated IPAs against one another in the mother of all craft beer brackets. You saw the carnage: No. 1 seeds fell, powerhouses butted heads, and surprise IPAs made a run at the prize. Here’s a recap of the 2017 Tournament of Beer: Washington State IPAs:

Week three was when the serious work began, with only the best of the bracket trying to brew IPAs into the Final Four.

In the King County Region, Georgetown Brewing Bodhizafa, the 2016 Great American Beer Festival gold medalists, made it to the Sweet Wort 16 only to be knocked out in the next round by Stoup’s Citra IPA, where it won a close battle with Fremont Brewing Lush IPA for a seat in the Final Four.

In the Southwest Washington Region, No. 1 seed Bale Breaker Topcutter IPA eased past Blewett Crikside Citra IPA and Backwoods Double Cutt IIPA with little effort, while Walking Man IPA dominated the same region knocking off Topcutter in the Sweet Wort 16, then handing Bale Breaker’s other Tournament of Beer IPA, Bottomcutter IIPA, a lost to make it into the Final Four. It should be noted Bottomcutter IIPA miraculously edged out Cinderella story Icicle Creek Brewing Bootjack IPA for its Sweet Wort 16 spot. Tournament of Beer historians will forever discuss No. 15 seed Icicle Creek’s tear through the Tournament.

In the Southwest, Wet Coast Brewing Moving Day IPA and Top Rung Brewing Shift Trade IPA, both from the South Sound of the state, won easy victories on the way to the region’s Hot Break Eight. Top Rung taunted their opponents with crazy videos, including a Macho Man Randy Savage inspired throw down shot inside Peaks and Pints. During the Hot Break Eight, Top Rung paid a visit to Wet Coast Brewing in Gig Harbor where they became quick friends and agreed to collaborate on a future beer. Top Rung handed their new friends a loss that day.

In the Northwest, Rainy Daze Brewing gobbled up votes left and right with their Pourhouse IPA and Goat Boater IPA — two IPAs that meet in the Sweet Wort 16 with Goat Boat moving on to face the popular Silver City Tropic Haze in the Hot Break Eight. Unexpectedly, this was an epic battle … the kind of thing Tournament of Beer “instant classics” are made of. Goat Boater won earning a seat in the Final Four.

Rainy Daze Goat Boater IPA. Top Rung Shift Trade IPA. Stoup Citra IPA. Walking Man IPA. Each brewery has a different IPA philosophy, Stoup Brewing head brewer Brad Benson scientifically keeping his pale malt sweetness in check with slight bitter, citrusy fruits and grapefruit and a dry finish with very bright, tangerine and Meyer lemon character, to Top Rung’s easily likeable and drinkable IPA with mango, apricot, and pineapple notes and a solid, slightly toasty malt core. Both are fabulous examples of the IPA art, and both are well worth a trip out of your way. But neither of them could top the IPAs at Poulsbo’s Rainy Daze and Stevenson’s Walking Man. These are the IPAs that made it into the Tournament of Beer: Washington State IPAs championship game.

Goat Boater isn’t an Adam Sandler movie but rather a slang name for kayakers, which there are plenty in nearby Liberty Bay, a hop, skip and head butt from the Rainy Daze Brewing Co. in Poulsbo. Goat Boater didn’t have any close calls. It never saw anything less than a triple digit point difference win. Was the Goat exhausted? Well, wild goats never sleep: That’s right, wild goats are like Chuck Norris, they don’t sleep; they wait. Rainy Daze Goat Boater IPA is certainly wild.

For a decade and a half, down the stairs of an old shop, across from the north bank of the Columbia River, Walking Man Brewing has been quietly churning out some of the world’s best beer, such as their 13th seeded IPA, a 2006 World Beer Cup gold medal winner. It’s a low seed for an extremely flavorful IPA full of pine, citrus and resiny notes. Walking Man Brewing could have just sent out their IPA onto the court and call it good. Or, they could have pushed their brewpub, which was named Best Brewpub in Washington five times in a row by Ratebeer. Did the Gorge brewery swing their award hardware around like a goat bell? This brewery doesn’t walk that way.

Saturday, April 29, 2017, the Tournament of Beer: Washington State IPAs Championship Game began with Goat Boater gobbling up online votes for an early lead. The Walking Man IPA kept the game within a hop leaf’s length for the first two hours. Then Poulsbo sounded then alphorn, which was weird since it’s a Scandinavian community. Goat Boater IPA leaped forward. And leaped. And leaped. With an hour left in the online voting portion, the Goat Boater unleashed the kraken. The windsurfers along the Columbia River either forgot about the Championship Game or it just was too much of a rad day with huge end-over-end forward loops and enough funnels to wipe out an entire college frat, as they say along the Columbia Gorge.

When the 4 o’clock bell chimed, and the online voting closed, Rainy Days had a 1,100-vote lead.

At 5 p.m., the Tournament of Beer moved into the live vote portion of the Championship Game, initiating a ballot vote and a bunch of craft beers — including both competing IPAs — at Peaks and Pints in Tacoma’s Proctor District. The Rainy Daze contingent arrived a half-hour before Team Walking Man made its way down Proctor Street. Guest head brewers such as Shane Johns of E9 Brewery and Morgan Alexander of Tacoma Brewing Co. chatted with Walking Man head brewer James Landers and Rainy Daze owner and head brewer Mike Montoney. The Seattle Sounders would ever so often steal an IPA conversation.

As promised, Peaks and Pints tallied the on-location votes around 8:30 p.m. of the IPA showdown, which Rainy Daze managed to own. After the raffle prizes found homes, and the weird “sports themed” soundtrack was switched off, we stumbled through a long explanation of past Tournament action, Rainy Daze Boat Goater IPA was crown the Tournament of Beers: Washington Sate IPAs champion by 1,181 margin.

Then, an IPA love fest broke out. Both breweries congratulated each other, tossing out compliments and posing for pictures. Montoney gave an emotional acceptance speech, thanking the voters and the Poulsbo community. Landers also expressed gratitude, giving props to his 1,500 Stevenson population, which he adores. An hour after Rainy Days’ Goat Boater won, both breweries and their peeps still held court at Peaks and Pints, signing autographs and telling stories of early bracket victories.

Rainy Daze Brewing will receive the Tournament of Beer trophy after completion of the engraving and a permanent handle at Peaks and Pints through the summer. Check out photos from the Championship game here.

So it’s official: Rainy Daze Boat Goater IPA is the winner of Peaks and Pints’ Tournament of Beer: Washington State IPAs. Eat it up, Washington state.

Peaks and Pints would like to thank its staff. All the Tournament explanations, the giant wall bracket, the endless handouts and ballots — they held their composure and trademark smiles. But, most of all, thanks to all the awesome folks who voted. You rock.

See you all back here in April 2018 for the Tournament of Beer: Pacific Northwest Porters!