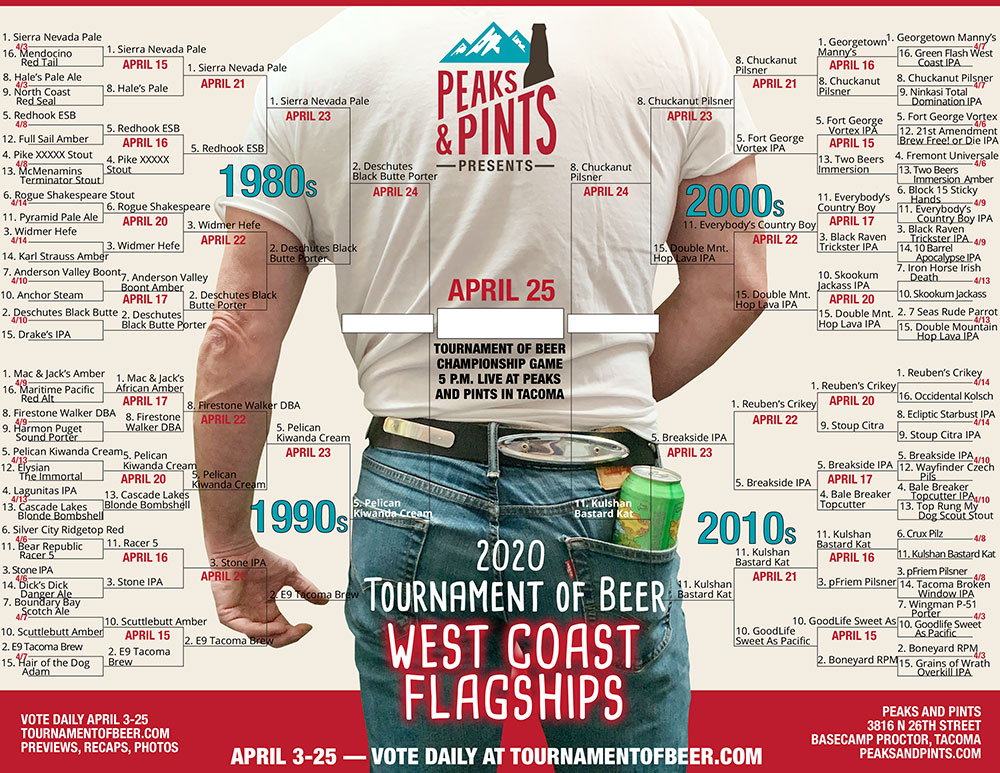 If you were to open a brewery in 2020, chances are you wouldn’t settle on a flagship beer, but a never-ending rotation of experimentation and trend spotting. That makes the 64 flagship beers the public nominated into the Tournament of Beer: West Coast Flagships all the more valuable. May they never fade away.

What flagship royalty will move onto the Final Four?

Thanks to your votes, we’ve narrowed down the Tournament of Beer to these four flagships:

Let’s remember that every flagship beer that made it into the tourney is worth a sip. Still, there has to be winners. We started with 64 of the best flagship beers the West Coast has to offer. Now, these four remaining boss flagships face-off for the ultimate glory — malt-to-malt battles to determine the best flagship to come out of Washington, Oregon, and California in the last four decades. Which flagship has the moxie to nail down the championship? Whose flagship will win it all?

It’s a 190-mile journey from Deschutes Brewery in downtown Bend, Oregon, to Pelican Brewing in Pacific City on the Oregon Coast. Residents in both cities could take the day off and make the three hour and 45 minute journey to grab a growler full of the other city’s flagship, the drive back home to enjoy both while voting on the game. Aside from small recipe tweaks, Deschutes Black Butte Porter remains unchanged since it first poured at the brewery’s brewpub in 1988: A delicate, creamy mouthfeel contrasts with layered depth revealing distinctive chocolate and coffee notes. Inspired by one of America’s traditional 19th century beer styles, Kiwanda has a golden color, floral aroma, refreshing body, and a clean, snappy finish, much like it did in 1996 when Pelican opened at Pacific City. A porter and a cream ale battling for the right to be named Oregon’s Best Flagship Beer. …

In keeping with the driving theme, Chuckanut Brewery & Kitchen in Bellingham is 1.9 miles away from Kulshan’s K2 main production facility on Kentucky Street, making much easier for Bellingham residents to enjoy growler fills of both competing beers while voting. Named “Best Small Brewpub of the Year” at GABF in 2009, Chuckanut was the first all-lager brewery to win the title. Their Pilsner is a sparkling golden beauty with a soft, biscuit-like character that gives way to an earthy, minerally hop bitterness. Ironically, Kulshan won our Tournament of Pilsners last year, which means nothing in this game. Kulshan Bastard Kat earned its place in the Final Four, beating Cruz Pilz, pFriem Pilsner, GoodLife Sweet As! Pacific and Breakside IPA with its strong citrus notes, resinous pine and assertive hop bitterness. Not only does this game crown Bellingham’s Best Flagship, but also Washington’s Best Flagship — a dream come true for the Championship Game.