PAPPI SWARNER: Hello Peaks & Pints Pals! I’m Peaks co-owner Pappi Swarner. For one day shy of three weeks, Peaks & Pints presented you with a compelling question: What is the best lager brewed in the Pacific Northwest? Well, we’re closer than we’ve ever been to finding out — at least based on the voice of you, the drinkers and voters. Today is a very special day in the Tournament of Beer: Northwest Lagers — the Ethanol Eight.

CLAIRE BRINICH: Yes, only eight out of an original 64 Washington and Oregon brewed pale and light lagers remain, each doing battle today to stay alive and fight on toward ultimate Tournament of Beer glory. If we were you, we’d just call in sick, grab a lager six-er and watch it all unfold. Short of that, a good place to start would be by voting below.

SWARNER: Claire and I will walk you through yesterday’s action, and then preview the four Ethanol Eight games. Let’s get at it. … 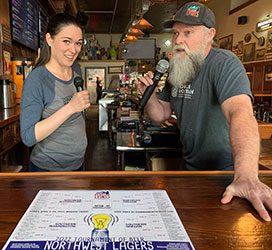 SWARNER: You can grab a lager just about anywhere, but if you want to wrap your muzzle around a monument, then you need to nestle up to a Kulshan Premium Lager or Holy Mountain Holy Light. Kulshan vs. Holy Mountain. Few sentences in Tournament of Beer come with more buzz, especially in April. A half-hour after No. 3 seed Premium Lager beat No. 7 seed Holy Light by 6 votes, Kulshan Head Brewer Wesley Finger stepped into Kulshan’s K2 brewhouse. Brewers were texting family members, conducting interviews and watching themselves on YouTube when the familiar voice of Finger cut through the joyous din. “You folks are Premium people,” Finger probably said, pausing for a moment. “You just beat the best. You should be proud.” This game will be the enduring legacy of the Tournament of Beer.

SWARNER: Stop freakin’ motion! Headless Mumby posted a stop motion Instagram Reel of a tiny car being block by E9 Brewing’s Detour Ahead then diverting to a Local 66 Lager House of Love. It was one of 360 clever social media posts Headless Mumby unleashed. E9 offered 253 social media posts, also choosing the clever route. You’re looking at the Champion Game of the Tournament of Tournament Social Media Posts right here. As you know, it’s really the Tournament of Beer: Northwest Lagers and Detour Ahead is on a straight path to the Ethanol Eight. The Tacoma brewery grabbed 55.56 percent of the vote from the West Olympia lager brewery — a huge win for E9.

BRINICH: I don’t want this game to ever end. Big shout out to Headless brewer Stacey O’Connor and E9 sales rep Katie Johnson for leading their breweries’ social media charge. 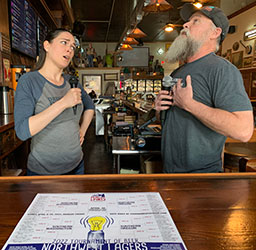 BRINICH: OK, Pappi, I know you’re beating around the bush because you have a crush on both these breweries, so I’ll be the one to announce Wayfinder’s 53.17 percentage win and advancement to the Ethanol Eight to take on pFriem’s Mexican Lager today.

BRINICH: Pelican Brewing’s Pelicano Extra Mexican lager — the heavy favorite to win the Southern Oregon Region after perceived contenders such as Block 15 Sol Fresco and Rogue American Dreamland were dismissed in earlier rounds — won another game beating Terminal Gravity’s Landmark Lager with 67.72 percent of the vote. Pelican knows a thing or two because it has seen a thing or two.

SWARNER: Let’s wade through the chilled wort. The following are advancing to the Ethanol Eight:

SWARNER: The Ethanol Eight is fully fleshed out: Chuckanut, Kulshan, E9, Everybody’s, pFriem, Wayfinder, Pelican, and Wild Ride. Eight breweries that — according to our readers’ poll — brew the best lagers in the Pacific Northwest. It’s all come down to eight. All the signs in the breweries, the mass emailings to customers and friends, the lager phone trees have paid off for these eight lager slingers. It’s now crunch(y) malt time for the lager royalty. Please vote for one beer per game. Please only vote once. Voting for today’s four games ends at 11:45 p.m.

BRINICH: But first please join in singing our National Anthem.

BRINICH: Thank you, Madison Rising! Let’s get to voting!

SWARNER: Chuckanut Brewery Asian Style Lager continues its expected domination of the bracket, the No. 1 seed surpassing the tasty Diamond Knot Cantina Lager. In the Second Round, Chuckanut Asian went frothy head-to-head with Wander Brewing’s Wander Lightly. Wander Lightly put up a good fight, but the Asian Style Lager brewed for at Din Tai Fung dumpling house restaurants in Washington and Oregon would not to be denied. In the Sweet Wort Sixteen, Chuckanut took the “mountain fresh to go” out of Burke-Gilman Brewing’s Vitamin R lager. Today, Chuckanut faces an old Bellingham friend, Kulshan Brewing, and their Premium Lager. These two breweries have broken bread, walked hand-in-hand on beaches, and consider each other the wind beneath their wings. Kulshan won the Tournament of Beer: Northwest Pilsners. Chuckanut took second place in the Tournament of Beer: West Coast Flagships. Here we go. …

BRINICH: Chuckanut spent 14 years or so in Bellingham. People remember. 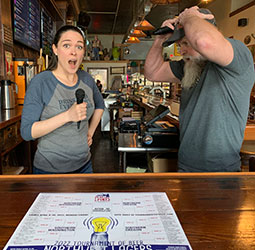 SWARNER: E9 Brewing beat Heidelberg Premium Lager. Everybody’s Brewing Local Logger beat Silver City’s Ziggy Zoggy Party Beer. Local Logger has seen many a logging season. Detour Ahead hit the market this year. The public nominated E9 Brewing’s Detour Ahead as a number 9 seed. A sign? Everybody’s Brewing co-owner Doug Ellenberger would invite special guests to shotgun his Local Logger with him during tours at his brewery’s previous location (two doors down). We could look at this game from every single angle, but the one factor they both share is their huge loyal following. People love the crap out of these two breweries, which is obvious if you ever attended their anniversary parties. Vote with your heart. 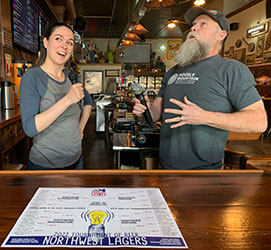 BRINICH: Our Kitchen calls it the game of the tournament, which is hard to argue with a one and two seed battling it out. These two breweries are friendly. In January 2019, they collaborated on a Landbier Hell rustic, unfiltered, country-style lager, which means Josh Pfriem and Kevin Davey knows what makes each other tick. Kevin knows Josh brewed his Mexican lager to style. Josh knows Kevin brewed Number 6 with his trademark Crispness® technique.

SWARNER: There’s a reason the Northwest is leading the new wave of lagers: we have brewers such as Josh Pfriem and Kevin Davey with amazing lager pedigrees. They both cut their teeth under Will Kemper at Chuckanut. You can only vote for one of these lagers once. Which will it be: pFriem Mexican Lager of Wayfinder Number 6?

SWARNER: What’s there to say that everyone doesn’t already know?  Both breweries have rabid fans and die-hard supporters, as well as delicious lagers. Pelican has the bigger base but Pelicano Extra! is a seasonal, and not every season, which probably explains its low seeding. Wild Ride Brewing is the marquee brewery in Redmond, Oregon with a killer patio and a lager named after a former bartender and wildlands firefighter who passed away.

BRINICH: Mobile your base, Pelican and Wild Ride, and get out the vote! 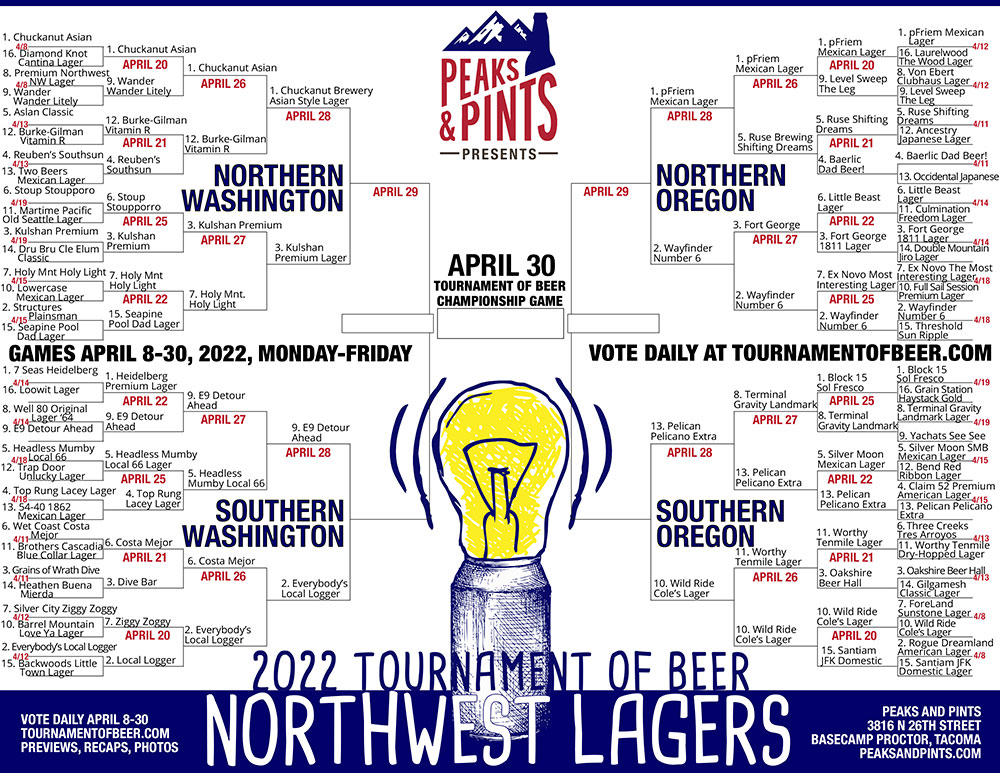