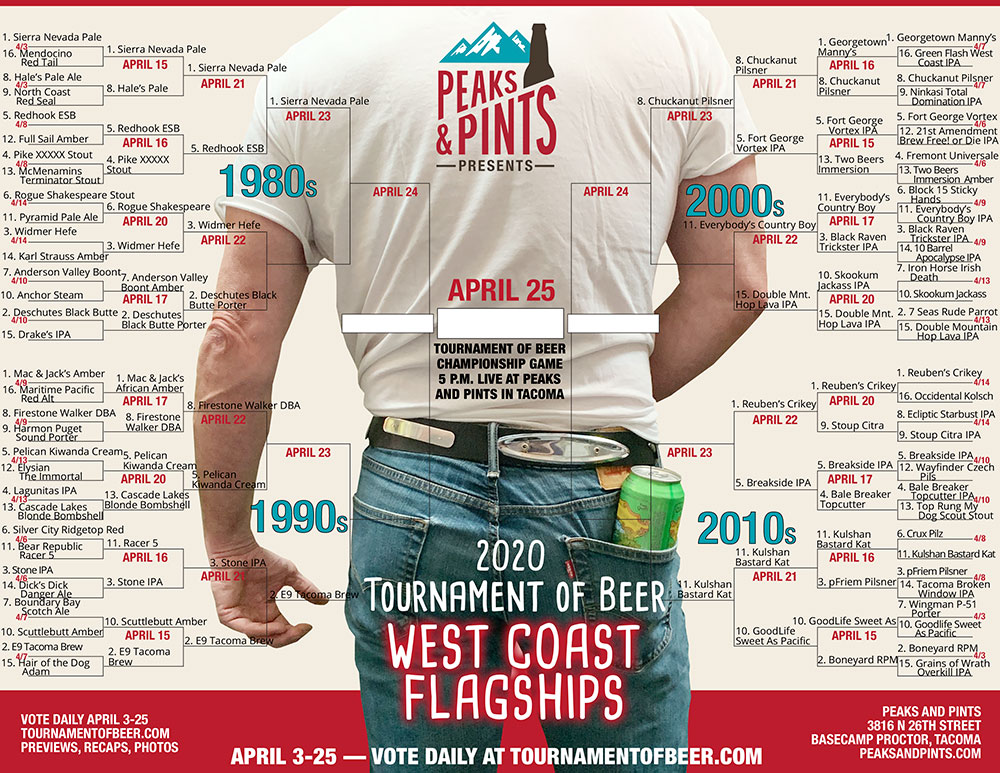 The best flagship beer on the West Coast? You think you know where to find it. We all do. After weeks of feverish voting (and with the help of a complicated computer program stolen from cavemen) we at Peaks and Pints have watched you, beloved voters, narrow down the Tournament of Beer: West Coast Flagships field from 64 to the 16 best beers that help launched a movement. Yesterday, the first eight beers in the Sweet 16 did battle. Today, the remaining eight go at it.

Without further ado, let’s take a gander at yesterday’s results, and then preview today’s matches. …

If you’re anything like Peaks & Pints, this match-up was called Tuesday night in college. The 1980s was an exciting time, and it had nothing to do with Chemistry 101 … or did it? Anyway, this match-up brought a tear to our eye. Pale versus ESB is what we dreamed when we created the Tournament of Beer: West Coast Flagships. Hard not to vote with emotion. Easy to vote on flavor. Either way, we hope you raised one as you voted for these two that helped create the thing so many love. When the buzzer sounded, and Betty White put away the pom-poms, Sierra Nevada Pale walked away with 56 percent of the vote. …

The public nominated E9 Brewery’s Tacoma Brew kolsch as a number two seed and Stone IPA as a number three seed in the 1990s Region. Both beers didn’t have any troubles winning their first two games. Then, Stone IPA ran into #tacomastrong. Grit City rallied round the family with a pocket full of taco shells, pairing their beloved kolsch with Taco Tuesday as they voted. It was too much for Stone. Tacoma Brew grabbed 54 of the votes and moves into the Great Eight.

Will and Mari Kemper pulled out their pedigree for this game. They had to do it; Fort George Vortex was tearing through the tournament like a tornado. No, the Kempers laid it all out on the court. In the early 1980s, chemical engineer and homebrewer Will Kemper paid a visit to the brewmaster of the now-defunct Rainier Brewery in Seattle where he was told he couldn’t open a brewery because he wasn’t born into it. Good one. In 1984, Kemper, his wife, Mari, and Andy Thomas opened Thomas Kemper Brewery in Poulsbo, Washington. In 1992, Thomas Kemper merged with Hart Brewing, which went on to be Pyramid Breweries. The Kempers saw the ugly side of the business and became consultants with East Coast and international breweries. After a bunch of traveling, they moved to Bellingham where they opened Chuckanut Brewery in 2008 — a convergence of technical and engineering concepts developed from more than two decades of professional involvement with craft brewing both home and abroad. With 3-Way Beta kegs and new Fields of Green cans hitting the market, Fort George didn’t have time to let their accolades play. Chuckanut Pilsner grabbed 58 percent of the vote and moves into the Great Eight.

GoodLife Brewing was enjoying the good life of winning Tournament of Beer: West Coast Flagships games with ease. But, experience is king in the Tournament of Beer. Kulshan Brewing’s Pilsner won last year’s Tournament of Beer: Northwest Pilsners. Kulshan Head Brewer Wesley Finger knew to hold back the Kat in the early hours of this game. Then, around 4 p.m., he let the Kats out, and by let the Kats out we mean he traveled arounbd Bellingham handing out necklaces made with Bastard Kat’s hops: Apollo, Cascade, Centennial, and Chinook. It worked. Bastard Kat clawed its out of the hole in a big way to win with 60 percent of the vote. Bastard Kat darts into the Great Eight.

OK, pour a Peaks & Pints growler into your collectors Bugaloos glass and let’s weed through the Magnum hops. The following are advancing to the Sweet 16:

A good beer experience owes as much to the atmosphere as the actual beer itself. After more than 22 years of operation, Craft Brew Alliance shut down the Widmer Brothers pub in Portland last year. As a result of the increased competition in the market and the pub’s more remote location in North Portland, they weren’t able to make the pub financially sustainable. You certainly wouldn’t imagine such a thing happening based solely on votes garnered during this tournament. Widmer Hefe is on a tear. Deschutes’ Black Butte Porter is also on a tear, but you could argue that’s its lively downtown Bend pub and its production facility taproom across the river could give the edge to the famous porter. Two historic beers battle it out today. Fasten your Wood Panel Ford Station Wagon seatbelts.

Most brewers would walk out of the brewhouse, pick up as stone and throw it at the fire pit if their first batch of beer was ruined because of oxidation from wine barrels it was aged in … which is what happened to Adam Firestone and David Walker. Instead of quitting, the two opted to give it another go, perfect the use of oak barrels, and patent the brew system that they created. The result is their Double Barrel Ale, or DBA, an English pale ale with hints of oak and smokiness. When Pelican founding brewmaster Darron Welch first started producing Kiwanda 24 years ago nobody in the US was brewing a pre-prohibition revival kind of cream ale. Fact is, Welch wrote his college thesis on the pre-prohibition era in the state of Oregon. His love of history encouraged him to brew the cream ale true to pre-prohibition style. These two true beers created by passionate brewers face off today. Someone should alert the Smithsonian’s beer history curator.

If it weren’t for COVID-19 and the self-quarantine, the elderly folks manning the toll both at the Hood River Bridge would have probably never finished the day’s crossword. If the taprooms were open at Double Mountain Brewery in Hood River and Everybody’s Brewing across the bridge in White Salmon, the traffic would have easily tripled. It would be a blast to watch these two buddy breweries battle it out live. They respect each other greatly, but they also both lover to have fun. This game is too close to call.