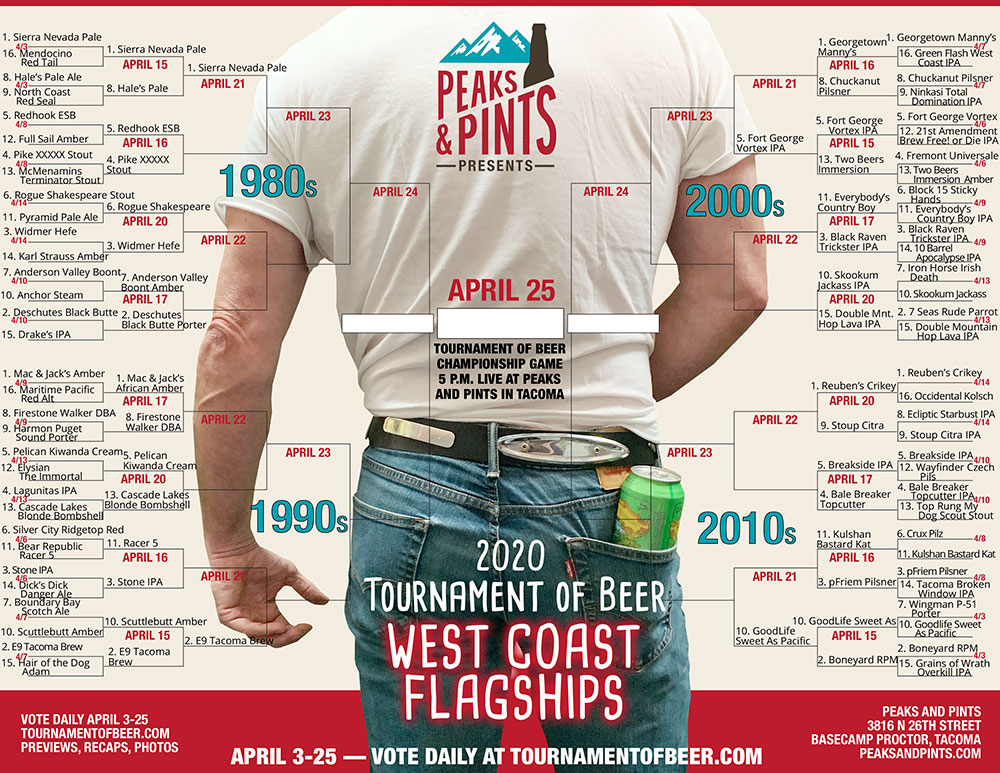 Beginning April 21, we’ll have cut the field of 64 West Coast flagship beers to the Sweet 16. April 23, it’ll drop to the Great 8. April 25, the Peaks and Pints Tournament of Beer: West Coast Flagships Championship will go down — picked by you, of course — but online, this year. The Tournament Championship Party is canceled, so no live ballots, no cheers of encouragement, and the winner will be announced the following day on this website. We’ll still award a trophy. And, the winning brewery will have a permanent handle at Peaks through the summer.

That’s all fine and dandy, but it’s Thursday and you don’t have time for idle chitchat. You have to clean the garage and watch four Netflix movies in a row. OK, OK, here’s a recap of yesterday’s battles, and a look at today’s Tournament of Beer action. Thanks for voting!

Right before the Tournament of Beer: West Coast Flagships launched, Sierra Nevada posted Ken Grossman’s original Pale Ale recipe on Instagram. Only more than 14,000 liked it. Two-row Pale, Caramel malt, whole cone Cascade hops – four additions — with “Crack open a Pale Ale!” as step number one and “Open another Pale Ale, and wait until ending gravity is 2.8 °Plato” as step number 7. We have no idea if that Instagram post generated votes yesterday, but Sierra Pale grabbed 64 percent of the votes and enters the Sweet 16.

Cynthia “Scuttle” Bannan, co-owner of Scuttlebutt Brewing with husband, Phil, was given the nickname “Scuttlebutt” by her father before she was born, because it was the “scuttlebutt” – or gossip — at Norfolk Naval Station where they were stationed, that her parents were going to have another baby. She was named “Scuttlebutt” when she was born and until her 13th birthday when, at her request, she announced she didn’t want “butt” as part of her name. She has been called “Scuttle” ever since. Scuttlebutt Brewing is docked next to Naval Station Everett, where many a sailor spends some time discussing ambers and the high seas. E9 Brewing sits just north of Joint Base Lewis-McChord in downtown Tacoma, where many an airman and soldier spend some time discussing the kolsch beer style and how weird it is for the two military branches to share the same base. The Intelligence offices for the three branches probably knew that E9 held onto a nine point lead (weird, huh?) pretty much all day, only to increase the lead to 57 votes in the final hour. E9 advances in the Tournament.

Set on the former site of Fort Astoria, the birthplace of Oregon, Fort George Brewery is gobbling up city block, medals and craft beer enthusiasts. Festival of the Dark Arts, Fields of Green Series, Skies of Wonder Series, 3-Way IPA Series — the brewery has become a cultural icon in addition to brewing exceptional beer. Vortex IPA started it all, and Fort George is still mighty proud of it. Two Beers puts ample time and strength behind their exceptional IPAs too, and it’s fair to say their flagship Immersion can become, well un-immersed. This a roundabout way to say Vortex grabbed 75 percent of the vote and swirls into the Sweet 16. 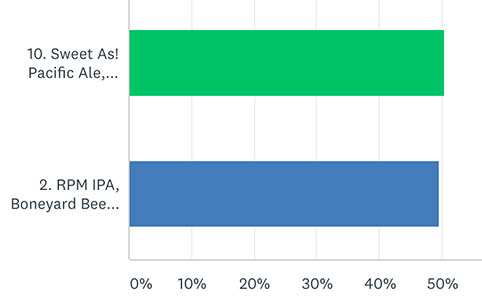 Yesterday, Boneyard Beer and Goodlife Brewing hit the social media. On Instagram, Boneyard reminded everyone they had RPM IPA in cans, while GoodLife posted a photo of their Sippy Cup Hazy Pale. On Facebook, Boneyard repeated their Instagram post, but GoodLife went big for the Tournament, reminding people to vote. Tournament of Beer Historians will be writing about these decisions for eternity, even 20 years from now during the Tournament of Beer: Planet Mars Ambers. GoodLife Brewing Sweet As! Pacific won by two votes.

OK, pour your Peaks & Pints growler into your 1979 collectors Burger King glass and let’s weed through the Caramel malts. The following are advancing to the Sweet 16:

Bear Republic sits just northwest of Sacramento. Stone Brewing sits just northwest of San Diego. Basically, Fresno sits between the two. In the 1990s, when the two breweries were founded, Fresno must have found momentarily relief from its rampant crime to enjoy its locale between two amazing IPAs (although Firestone Walker was closer). These two California notable flagship beers due battle today with no regard to Fresno. (Yes, we’re drinking while writing these previews.)

Will, Mari, Manny and Roger — not a 1960s folk band, but rather four people who took their beer life lessons and opened two kickass craft breweries. In 1984, Will and Mari Kemper launched their beer careers when they opened Thomas Kemper on Bainbridge Island. Manny Chao was one of the original employees of Mac & Jack’s Brewing before he and his roommate/homebrewing partner Roger Bialous opened Georgetown Brewing in 2002. Today, the staff of these two breweries, and all the successful brewers who honed their chops at Georgetown and Chuckanut, will pause for a moment, click a mouse or tap a finger, and rejoice over their beer that started it all.

Josh Pfriem brewed Chuckanut beers before the 2012 opening of his pFriem Family Brewers in Hood River. He left Bellingham before Kulshan Brewing opened up the hill (and to the right) from Chuckanut, which also opened in 2012. The fact that Josh Pfriem didn’t taste Bastard Kat IPA before he opened his brewery probably doesn’t affect today’s voting decision, but would the landscape be different? Would pFriem’s simple named but delicious award-winning “Pilsner” have been called, say, Prick pFilsner? Or, what about if the tides were turned and Kulshan ended up naming their playful but delicious award-winning IPA just “Kat”? Things to ponder while voting.