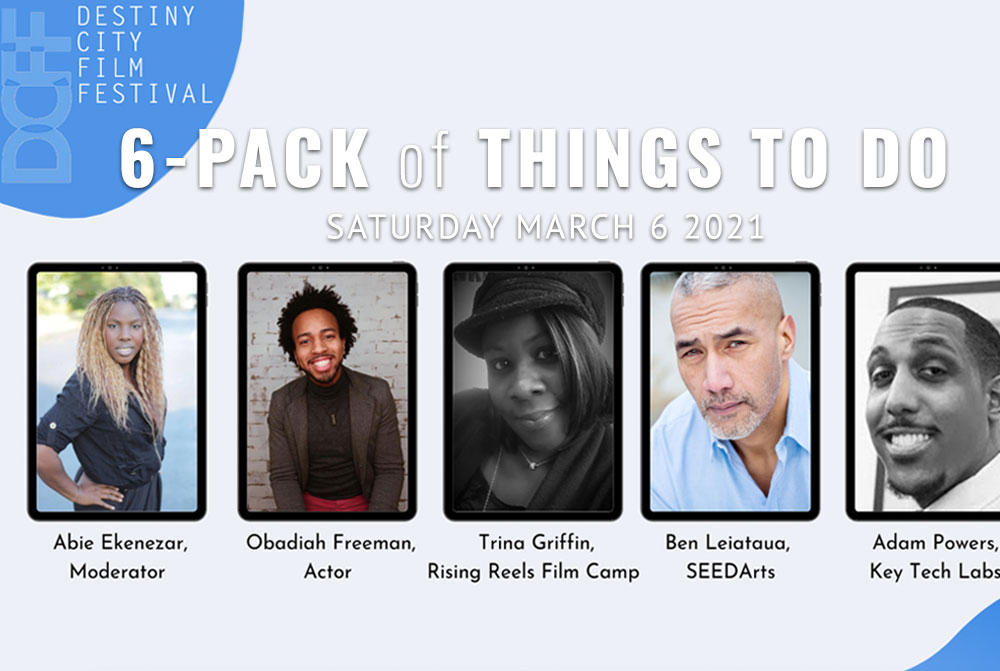 It’s Saturday, and we have six events for you. Let’s go 6-Pack of Things To Do!

FILM: The Destiny City Film Festival recognizes that inclusion is not always enough. “Providing material support and opportunities for marginalized communities is vital in achieving equity,” states DCFF Director Emily J. Nakada-Alm on the festival’s website. At 1 p.m., the film festival presents “Beyond Inclusion: Equity, Opportunities & Film,” a free virtual filmmakers panel candid discussion on issues of equity with an audience Q&A following. Reserve your free tickets here. The DCFF continues virtually with the 39 independent films available through the end of the festival, March 7.

BEER FLIGHT: Consider the Oreo. In the 100 years since its invention, Oreo has become the representative cookie of modern American culture. Everyone loves Oreos. Oreos are mixed into Dairy Queen Blizzards. They’re used to make chocolate-y delicious pie crusts. Weird Al Yankovic wrote a song about Oreos called The White Stuff. And, they make delicious stouts. It’s not like you didn’t know there were stouts made to emulate Oreos. It’s a pretty obvious and common adjunct flavor profile, chocolate and vanilla. Smoosh ‘em together, and that’s basically an Oreo. Today is National Oreo Cookie Day. In celebration, we’re suggesting a to-go flight of chocolate meets vanilla meets marshmallow meets alcohol in our flight, Peaks and Pints Pilot Program: Oreo Day on The Fly. 11 a.m. to 10 p.m., 3816 N. 26th St., Basecamp Proctor, Tacoma

WALKING TOUR: In 1889, Thea Foss founded a rowboat service in Tacoma that later grew to become Foss Maritime, the largest tug and towing operation on the West Coast. Thea Foss’s name lives on as the Thea Foss Waterway, which can be viewed from the Museum of Glass, several condominium complexes, a couple parks and an assortment of marinas. Explore the outdoor art and architecture of Museum of Glass, the Chihuly Bridge of Glass, and Thea Foss Waterway with the Museum of Glass’ education staff. Tours will last about 45 minutes today and tomorrow and will include little-known facts about the art and architecture along the waterway. 11 a.m., 1 and 3 p.m., Museum of Glass Store, 1801 Dock St, Tacoma, reserve your spot here, $10

FILM: The father of the American Arts and Crafts movement is streaming in The Grand Cinema’s Virtual Screening Room. Gustav Stickley designed and manufactured furniture, published The Craftsman magazine, and founded Craftsman Farms — a progenitor of the farm-to-table movement. Gustav Stickley: American Craftsman highlights Stickley’s life via interviews, archival materials, and a close examination of his most iconic works. $10 rental

MUSIC: Jerry Miller really, truly is legendary. One gander at the man’s lengthy resume can tell you that. A T-Town original (born here in 1943), and a founding member of Moby Grape (see: San Francisco music scene in the ’60s, and one of the most influential bands to emerge from it), Miller has made a name with his top-notch guitaring, songwriting, and singing. Rolling Stone named Miller the 68 greatest guitar player off all time, and Clapton (who Miller has played and recorded with, along with other HUGE names like Hendrix and Page) once called Miller the best guitarist in the world. Talk about a compliment. Enjoy an intimate evening with Jerry Miller and Kim Workman performing blues, jazz, country standards, Moby Grape songs, and Jerry Miller originals. 7-10 p.m., all ages, McMenamins Elks Temple, 565 Broadway, Tacoma, no cover