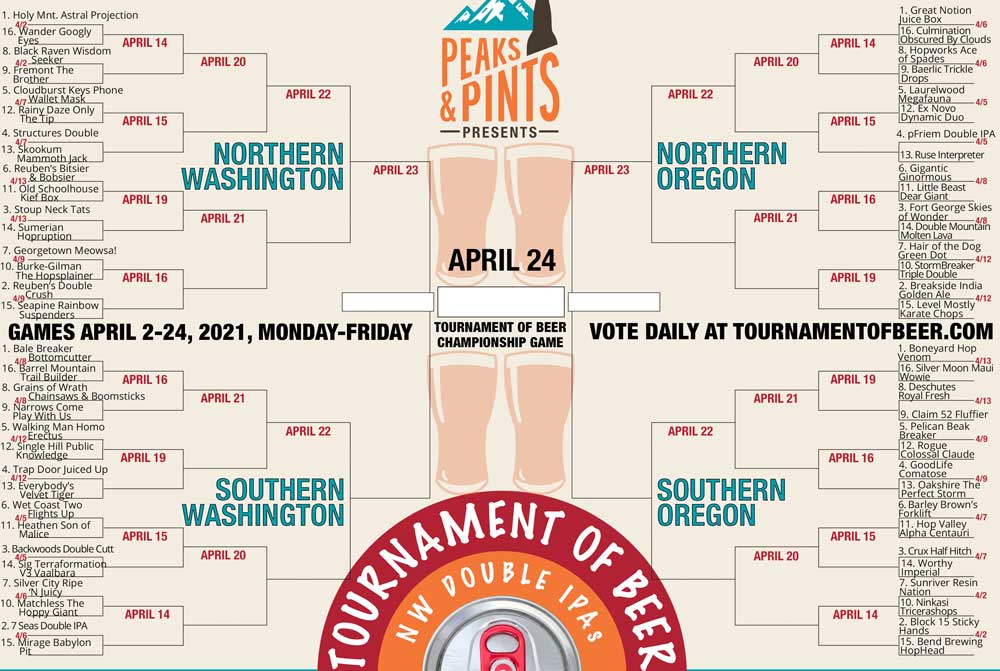 The 6-Pack of Things To Do is back after getting lost in the woods for a few days. We’re refreshed and ready for three weeks of Tournament of Beer action! Let’s get ready to see double!

TOURNAMENT OF BEER: Over the next three weeks, Peaks and Pints pits 64 of Pacific Northwest’s best in a head-to-head battle of double IPAs. This is a tournament, folks, not a playoff. Each match is do or die — one misstep and you’re out of the dance. Added too much Caramel malt, missed your clean high-alpha bitter hop addition mark, and you can pack your brewer’s paddle and go home. We speak, of course, of the Tournament of Beer: NW Double IPAs. Sixty-four Washington and Oregon double IPAs were selected and seeded by the public in February, and now the time has come to see which double IPA reigns supreme. The top 64 vote getters — the cream of the hops — will compete Monday through Friday, April 2-24 at tournamentofbeer.com or peaksandpints.com. Through online voting, double IPA drinkers will pick winners until the best double IPA in the Northwest is crowned. It’s just like March Madness, only with way more alpha acids. The Tournament opens today! Vote now!

BEER FLIGHT: In the early ’90s, Dusty Trail converted the historic Engine House No. 9 bar into a brewpub at the corner of Sixth Avenue and Pine Street, officially becoming the first microbrewery in Tacoma. Dick Dickens grabbed the Engine House reins in 2002, bringing in head brewer Doug Tiede. Heads turned and medals were hung. In 2011, The X Group added the Engine House to their local restaurant empire, with Shane Johns and Donovan Stewart running the kettles and hanging even more medals, mostly for their sours and saisons. Two years ago, they separated the brewery from the restaurant and opened E9 Brewing in Tacoma’s Historic Brewery District. This past year, they have cranked out an endless supply of new, delicious beers, five of which are in our to-go beer flight today, Peaks and Pints Pilot Program: E9 Brewing On The Fly. 11 a.m. to 10 p.m., 3816 N. 26th St., Basecamp Proctor, Tacoma

ART: “Modern Margins” is the third annual spring art show curated by Handmade PNW to explore gender and its effects on women and other historically marginalized genders. The show runs at Alma Mater through the month visible through the windows at the venue’s Milk Gallery as well as online at handmadepnw.com. “For those who’ve not attended the past shows, ‘Modern Margins’ assembles a wide variety of arts pieces, ranging from poetry to painting to sculpture, from a diverse collection of artists,” writes Adam McKinney on the Alma Mater website. “This year’s show is no different. 9 a.m. to 7 p.m., 1322 S. Fawcett, Tacoma, no cover, photo courtesy of almamatertacoma.com

ZOO: The beautiful striped patterns on the tigers are unique to each tiger — no two are the same. Those stripes help keep them camouflaged in the forests of Sumatra. Unfortunately, it’s those stripes that are also the reason why Sumatran Tigers are critically endangered — due to poaching. It’s estimated that fewer than 400 Sumatran Tigers are still in the wild. That’s why it’s so important to have Indah at the Point Defiance Zoo & Aquarium. Endangered Sumatran tiger Indah, born at Point Defiance Zoo in 2014, is now back home in Tacoma. Visit her. Noon to 4 p.m., April 2-4, Point Defiance Zoo & Aquarium, 5400 N. Pearl St., Tacoma, $14-$18

COMEDY: Back in 2011, Lacey native Nate Jackson use to host his “Super Funny Comedy Show” at the Varsity Grill in downtown Tacoma. Today, his show has its own venue as Jackson’s opened the Super Funny Comedy Club in the Holiday Inn at 84th and Hosmer, just off I-5 near Lakewood. Jackson started in comedy 20 years ago, and tonight he hosts Tommy Davidson, he of former In Living Color fame, Spike Lee movies, Showtime specials and on and on. 7 and 9 p.m., 8402 S. Hosmer St. Tacoma, $22-$32

FILM: Almost two months later than last year’s ceremony and encompassing two venues, 2021’s Academy Awards will cap the cinematic year that couldn’t get started and never seemed to end. Sunday, April 25, it’ll be Oscar night on ABC with hopeful nominees appropriately distanced inside Hollywood’s Dolby Theater and Los Angeles’ Union Station. The Grand Cinema’s Virtual Screening Room is where you’ll find the 5 nominees for the Live Action Short Subjects. All five shorts are solid, from Feeling Through’s gentle portrait of humanity to the professionally acted The Letter Room, while the remaining three, The Present, Two Distant Strangers and White Eye, explore divisions of class, nationality and race with cinematic flair. Especially Two Distant Strangers, which takes the all-too-familiar interaction and outcome of white cop/black civilian and gives it a Groundhog Day twist. It’s a clever distillation of 2020 that is at once funny and frustrating. $12 rental