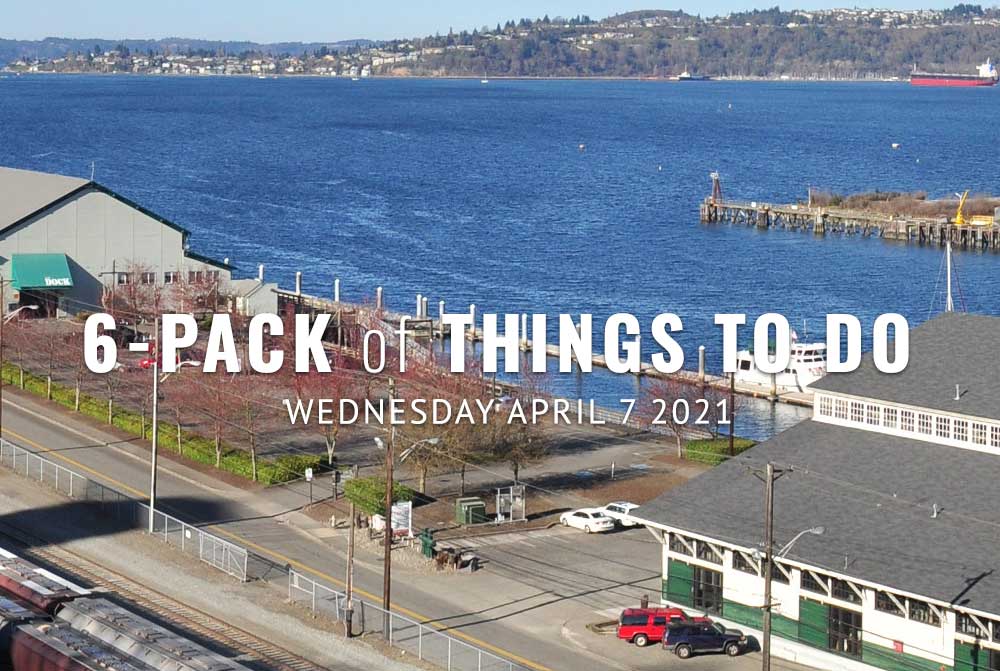 First, everyone needs to check off a couple items. Number one: Check out yesterday’s Tournament of Beer winners here. Number two: Vote on the eight Northwest double IPAs battling it out today — also here. Number three: Check out today’s 6-Pack of Things To Do. Cheers!

TOUR: Take a virtual guided tour along Downtown Tacoma’s historic waterfront and learn about locations and individuals that have had a significant impact in our city​. Led by Patty Peterson, director of the Tacoma Waterfront Association, the 1.6-mile walk, will be available on the free GeoTourist app beginning today, and is sponsored by the Tacoma Waterfront Association. The tour begins behind the Henry Waterfront Apartments (1933 Dock St.) on the Thea Foss Waterway Esplanade. Downtown On The Go’s Walk Tacoma series, sponsored by MultiCare, is a five-event walking series. For more information on the full Walk Tacoma Series visit www.downtownonthego.org. Photo by Joe Mabel

BEER FLIGHT: We’ve been having a dry April so far here in the South Sound, and by the power of optimism, it can only go up from here! But before you break out the beachwear, it looks like afternoon rain today. Spring showers brings spring beer, or something. That’s probably not the popular adage, but in works at Peaks & Pints. After all, climate change has made wacky weather even more pronounced, so breweries find it difficult to create the right beer for the season, since the “season” in April can mean refreshing lagers on the patio one day (yesterday) and thick, high-ABV stouts by the fireplace the next (today). Therefore, Peaks & Pints offers a to-go flight for in between these two scenarios — a flight we’re call Peaks and Pints Pilot Program: Spring On the Fly. 11 a.m. to 10 p.m., 3816 N. 26th St., Basecamp Proctor, Tacoma

SPRING FAIR: The Washington State Spring Fair is on, and by one we mean on four wheels. This year’s unique, hybrid drive-thru and step-out Spring Fair experience runs April 7-11 and April 14-18. While this year’s Spring Fair might look a little different, it’s still jam-packed with fun things to see, unique experiences, entertainment and, of course, Fair food. 10:30 a.m. to 9 p.m., with last entry at 7:30 p.m., Ninth and Meridian, $30-$35

BOOK: On the morning of April 29, 1986, a fire alarm sounded in the Los Angeles Public Library. The fire was disastrous: it reached 2000 degrees, burned for more than seven hours, and consumed 400,000 books and damaged 700,00 more. It’s still a mystery how it started. Weaving her lifelong love of books and reading into an investigation of the fire, award-winning New Yorker reporter and New York Times bestselling author Susan Orlean delivers a mesmerizing and uniquely compelling book that manages to tell the broader story of libraries and librarians in a way that has never been done before. Join the Wheelock Book Club for a discussion of “The Library Book.” 6:30-7:30 p.m., Wheelock Zoom Room, registration required here

FILM: Amongst the pythonic mountains of land-locked Lesotho, an 80-year-old widow winds up her earthly affairs, makes arrangements for her burial and prepares to die. But when her village is threatened with forced resettlement due to the construction of a reservoir, she finds a new will to live and ignites a collective spirit of defiance within her community. In the final dramatic moments of her life, Mantoa’s legend is forged and made eternal. Watch the whole story unfold in the film, This Is Not a Burial, It’s a Resurrection, streaming in The Grand Cinema’s Virtual Screening Room. $10 rental