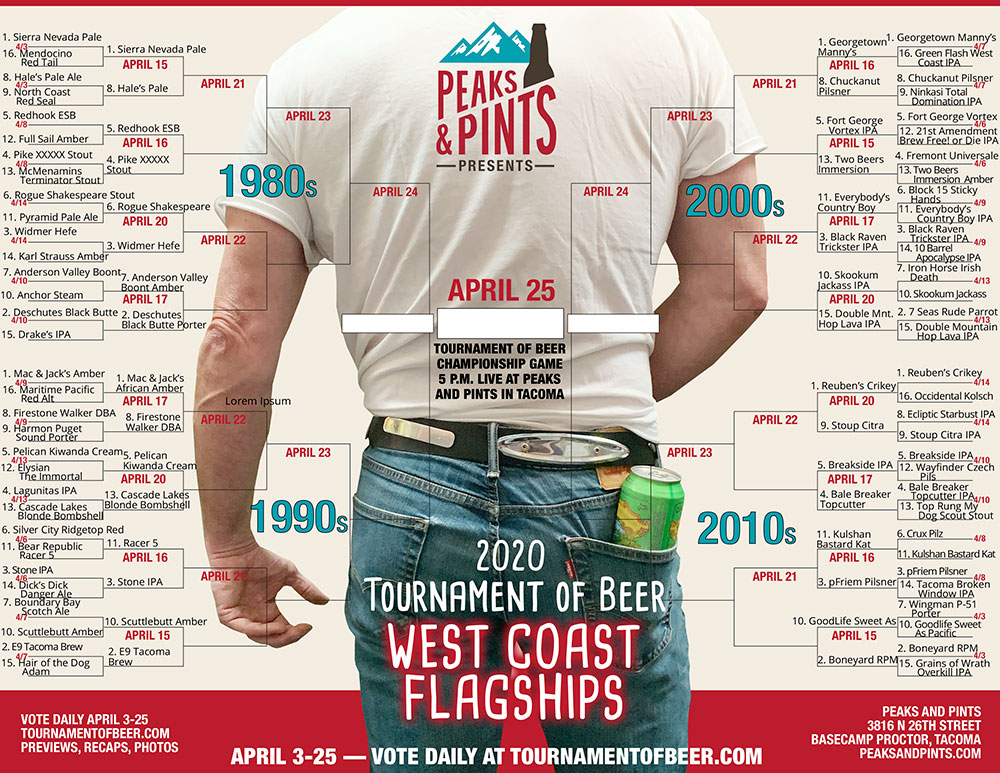 Now it’s getting exciting. The Cascade hops are really starting to fly, and the Crystal malt bags are piling up so high you could call it Crystal Mountain. OK, so that’s a dumb analogy. Point is: this is serious.

Today the Tournament of Beer: West Coast Flagships officially kicks off its Second Round, meaning 32 flagship beers remain, and the competition is as hot as ever. What West Coast flagship beer will be crowned Saturday, April 25? The path to flagship greatness starts today.

Here’s a recap of yesterday’s battles, and a look at today’s Tournament of Beer action. Pour your Peaks & Pints growler into your 2015 Kentucky Derby glass if you know what’s good for you and get to a voting.

“Some are born great, some achieve greatness, and others have greatness thrust upon them.” It’s hard to argue that William Shakespeare wasn’t born great, but in truth, the success he enjoyed during his own life didn’t come close to the reverence we pay him now. Rogue Ales’ Shakespeare Oatmeal Stout was born great in 1988 in a basement Ashland, Oregon. It has earned the most awards and highest ratings of any of the Rogue beers, including a 57 percent win in the Tournament of Beer: West Coast Flagships First Round.

Sure, Kurt and Rob Widmer closed their Portland taproom, and sales haven’t been the Widmer-like. But, Widmer’s flagship Hefe remains the best-selling, most-widely recognizable craft beer in Oregon, leading the way to keep Widmer among the 50 highest-selling breweries in the nation. The votes backed up those stats. Yesterday, Widmer Hefe trounced Karl Strauss Columbia Street Amber, a beer the Northwest doesn’t really know, with 75 percent of the vote. Hefe moves into the Second Round with an April 20 date with Shakespeare.

If you visit reubensbrews.com, click on the Crikey can under “Brews,” read past, “The first ever American IPA we brewed, this is still our most popular beer! Crikey IPA (“Cry-key”) has a hop profile led by notes of citrus, pine & tropical fruit with a malt backbone providing balance to every sip” — you can click on a slide show of Crikey’s medals and awards. You’ll then understand why the IPA grabbed 74 percent of the vote yesterday against such a worthy opponent.

Both born in 2013, these two breweries’ IPAs battled yesterday. We mean battled. Starburst played above the rim. Stoup ran Citras around Starburst hops. At 5 p.m. the two IPAs were tied. At 7 p.m., again, a tied game. Then, it happened. Stoup, founded by a scientist, located the nearest stoup, took a scoop, and splashed the brewing team back at the brewery. The wort steam parted. A light reflected off the food truck. And Citra won by 10 votes. A divine intervention? If that’s how you describe the Citra hop, then yes.

OK, Stream Bruce Springsteen’s “Born In The U.S.A.” and let’s weed through the low IBUs. The following are advancing to the Second Round:

These two pale ales gave birth to the Hop Heads. Pale in compassion to today’s pale ales, Sierra Nevada Pale Ale and Hale’s Pale American Ale were brewed with generous quantities of hops — Cascade for Sierra and Hallertau for Hale’s, although Hale’s quickly jumped on the Yakima Valley hop train. This is a battle of craft beer pioneers, California and Washington, respectively. This is important.

Ignoring the history, talent and marketing behind these two longtime breweries, it comes down to a delicious amber versus a delicious kolsch. Amber ale is a term invented by American brewers to account for a stylistic gap between pale ales and brown ales. A kolsch, an ale stored like a lager, is a snappy and beautifully refreshing beer, bright without being overbearing. So, maybe this game comes down to the weather. The forecast calls for … partly cloudy skies. Well, that’s not helpful as these two styles match the forecast. Forget about the thing we said about marketing. …

Even with multiple dimensions and infinite permutations that factors in every variable you could imagine — strength of schedule, hops per barrel, clarity, tradition, number of brewers, size of mascot, name of mascot, college grade point average sales rep — this game is anyone’s guess? You have to shut all that out and concentrate on the beers. Vortex is medium bodied IPA with a resinous mouthfeel, grapefruit more than pine and finishes with lingering hop bitterness. Immersion Amber offers Caramel malt and burnt sugar playing off a mix of floral, citrus, and spicy hops and a bit of tobacco. You have to search your soul.

GoodLife vs. Boneyard. Few sentences in our Tournament of Beer come with more buzz, especially in their hometown of Bend, Oregon, a city that stands out in a state known for its beer, with more breweries per capita than any other city in the Beaver State. Sweet As! Pacific Ale and RPM IPA are everywhere in the Central Oregon high dessert city. They can be found side-by-side in Bend bars, in opposite mountain bike saddlebags, and on opposite of Bend senior home Bridge tables. We imagine they’ll be many betting losers under Bend’s Tumalo Falls after this game.