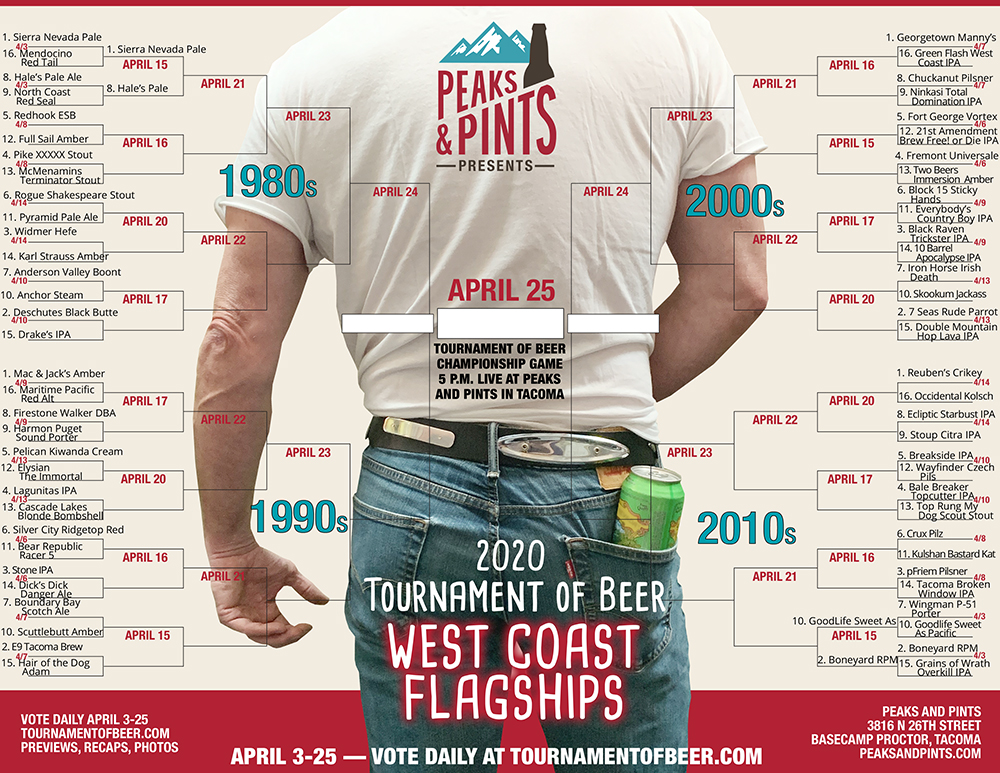 It’s 1983, our college brains were controlled by subliminal suggestions on bikini beer posters. “Miller Time” tried to override the basic biological and social forces of sex hormones and newfound independence. But, no college experience was more horrifying than the moment when we were forced to drink Miller Lite. It was so, so bad. We almost don’t even want to talk about it, because it brings up such horrifying memories. We still have nightmares about those early 1980s days. The beer literally tasted like metal coins. Ugh, “Tastes Great vs. Less Filling” softball game commercials too.

Thankfully, there was Sierra Nevada Pale Ale, and the flagship beers that followed. If brewers were to open a brewery this year, chances are they wouldn’t settle on a flagship beer, but a never-ending rotation of experimentation and trend spotting. That makes the Sierra Nevada Pale and ilk all the more valuable. May they never fade away.

Flagship beer drinkers turned out in force to vote in yesterday’s kickoff of the Tournament of Beer: West Coast Flagship competition. Guys on bicycles shouted encouragements to vote. Retirement home caretakers passed around iPads. Phone trees were instigated. Our poor little website had to work overtime as droves voted in Round One first day action.

The public picked 64 West Coast flagship beers for the Tournament of Beer last month, which, as said, kicked off yesterday with two games in the 1980s region and two games in the 2010s region. Brackets now hang next to temporary closed signs, in essential businesses hallways and on the bottom of birdcages. Everyone is discussing Two-row malt and Cascade hops. It’s crazy fun.

Without further ado, let’s take a gander at yesterday’s results. The next Tournament of Beer: West Coast Flagships Round One action goes live at 9 a.m. Monday, April 6 right here on the Peaks and Pints website.

Mendocino Red Tail Ale got imPaled yesterday. Sierra Nevada Pale impaled Red Tail with 80 percent of the votes. No surprise, really. Over the course of close to four decades, Sierra Nevada Pale Ale has evolved from an industry outlier to trusty dive-bar standby, all the while maintaining fierce allegiance among aficionados. You can find it in all 50 states, in chain restaurants, Peaks & Pints, supermarkets, gas stations, Peaks & Pints, bodegas, sports stadiums, and the most unsavory watering holes. Anyway, Sierra Nevada’s No. 1 seeded Pale Ale moves into the Second Round.

Hale’s Pale American Ale haled North Coast Red Seal Ale back to the sea. (No way can we keep the double entendres coming.). Another flagship blowout, this time by one of Washington state’s founding beer fathers. Mike Hale launched Hale’s Ales Ltd. in the small town of Colville about 70 miles north of Spokane. He gathered investors and equipment — mostly of the used-dairy variety — and built a 10-barrel system that included open fermenters similar to the way things were done in England. Hale’s Pale American Ale grabbed 61 percent of the vote and moves into the Second Round.

We’re shocked Wingman Brewers’ P-51 Porter lost to GoodLife’s Sweet As! Pacific Ale yesterday. Yes, obviously, P-51 knew the tournament landscape as it earned Wingman Brewers the 2018 Tournament of Beer: Northwest Porters trophy. That wasn’t what shocked us. And, certainly the GoodLife pale ale has enough medals to warrant a run to the championship. No, the shocker was GoodLife kept calling Wingman’s landline every 30 minutes and shouting, “Sweet As!” and it must have rattled the Tacoma brewery. This is a big win for the 10th seeded GoodLife. They have caught the attention of the Tournament of Beer Analysts. Sweet As! Pacific moves into the Second Round with 62 percent of the votes.

By the beard of Zeus! RPM and Overkill faced off over-the-top vocals, squealing twin-guitar harmonies, ominous double-kick/bass rumbling, extra-long songs about centrifuges, Simcoe and Lenny until RPM took it to the extreme with a zero-compromise attitude that, even in a hoppy climate, is admirable in this tournament. Boneyard dropped the mic with 59 percent of the votes and heads into the Second Round.

Let’s weed through the malt. The following are advancing to the Second Round: