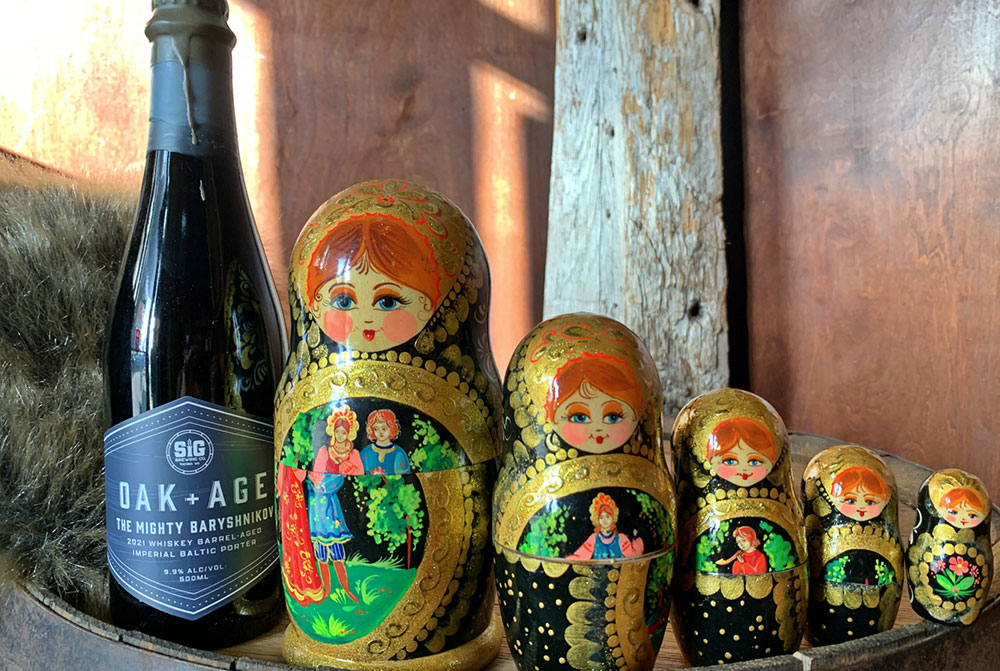 It’s a beautiful beer. Boozy aroma leads to notes of chocolate milk, oak, maple, dark fruit, and molasses. Aged in Copperworks Whiskey barrels, it’s not Jeff Stokes first barrel aged beer, but Oak + Age: The Mighty Baryshnikov Baltic Porter takes the stage as Sig Brewing Company’s first barrel-aged bottle release. Stokes released many barrel-aged bottles during his time as head brewer at Three Magnets Brewing in downtown Olympia. When he helped open Sig in Tacoma’s Historic Brewery District last spring, he took time away from handing out mason jars filled with his beer to masked folks lined up curbside to fill barrels with his Baltic porter. With a portion of the 265 bottles of The Mighty Baryshnikov produced lined-up at Peaks & Pints, we caught up with Stokes for insight on Sig’s first release in their Oak + Age series.

PEAKS & PINTS: You were a mason jar to-go only operation when you began The Mighty Baryshnikov project. Did it cross your mind you might be releasing the finished product under the same Covid restrictions?

STOKES: It’s very true that a lot has happened and changed in this world since we started slinging mason jars of beer. Being an optimistic person and listening to some potentially positive forecasts at the time, I assumed we would be well past the pandemic and back to business as “normal” by now. I really didn’t ever anticipate the need for glass barriers and additional protocols this late in the game. But here we are, in a dystopian world, just trying to get by and move forward.

PEAKS & PINTS: Why did you choose a barrel aged Baltic porter as your first aged bottle release?

STOKES: We made a Baltic porter because I have always loved the style and it is under-represented in the dark beer category. I was inspired to brew this beer when I first tried Jack’s Abbey Framinghammer, an exceptional bourbon barrel-aged Baltic porter. The Framingham, Massachusetts, brewery only produces lagers, and they exceed at it.

PEAKS & PINTS: In the late 1700s, Russian royalty partied with Baltic porters. Why didn’t you name your version “Catherine The Great” instead of the nod to the famous Russian ballet dancer?

STOKES: It’s true, The name of the beer is inspired by the strength and grace of ballet dancer Mikhail Baryshnikov. He hails from the Baltic state Latvia by birth but of course became renown dancing in the former Soviet Union and made his name and found success all over the world. The beer itself has a soft power to it with refined edges but a bold 9.9 percent ABV. Much like its namesake, it is mighty yet smooth.

PEAKS & PINTS: What and when is the next Oak + Age release?

STOKES: And we didn’t wait long to get other beers into barrels. We have our next Oak + Age release coming up at the end of the month. It will be available in 16-ounce cans, and it is a vanilla infused Russian imperial stout called “Oak + Age: Vanilla From Tacoma to Vladivostok with Love” that should drop after Thanksgiving.