AMBER: Double IPAs Sweet 16, baby! I’m Peaks bartender Amber and I’m double excited to announce we have whittled the competition down to the Sweet 16. Yes, 16 double IPAs brewed in Washington and Oregon are poised to make the final push to the Final Four, which will be held Friday.

BETHANY: Our job is two-fold today, Amber — to re-hash yesterday’s Second Round games, then preview today’s first four games of the Sweet 16 for voting. 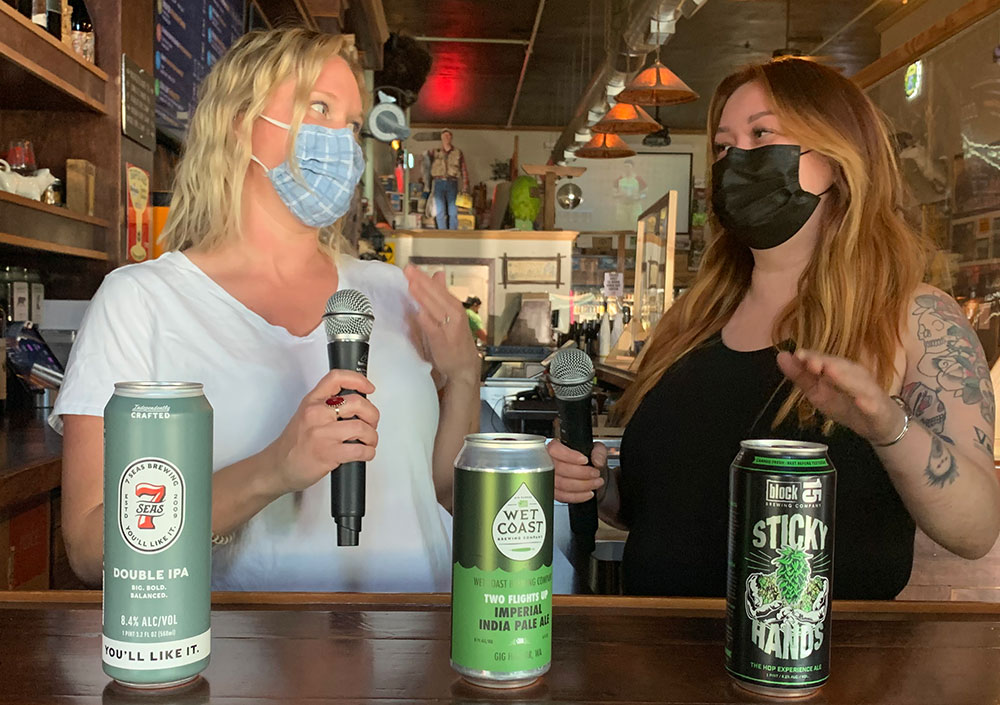 AMBER: It’s 4-20 Bethany, which means kief will be on the brain. Kief is the resinous crystal-like trichomes that are found on marijuana flower and that are accumulated, resulting in a higher concentration of cannabinoids.

BETHANY: I don’t know your street talk, but I do know Old Schoolhouse’s Kief Box is a very dank and weed-like West Coast IPA that just happens to be hazy, and hoppy.

AMBER: Sumerian Hopruption has a little more fruit character than the Kief Box, lifted by some sweetness and a nice malt backbone.

BETHANY: What time is it?

AMBER: It’s time to announce Old Schoolhouse won with 57 percent of the vote and will enjoy the day before their Sweet 16 tomorrow against Georgetown Meowsa.

AMBER: Velvet Tiger pounded on the lead early and never looked back, nabbing 62 percent of the vote. The Peaks & Pints Kitchen believes Everybody’s Brewing rode the back of their kitchen, pairing their double IPA with a giant ass burrito. You can tell how good the food is at Everybody’s by the way all the customers lean forward each time an order comes out of the kitchen and the way all but one lucky someone fall back into their chairs, disappointed when they discover that the food isn’t for them.

BETHANY: Or, Velvet Tiger is a big piney IPA with a balanced bitterness that people adore.

BETHANY: This is a tournament, folks, not a playoff. Each match is do or die — one misstep and you’re out of the dance. Cut your diacetyl rest short, over crush your grain, or grabbed the wrong hop bag, and you can pack your brewers paddle and go back to cleaning kegs, crying into your bag of Carapils malt.

AMBER: This tournament is about the fundamentals: water, grain hops and yeast in perfect harmony. It’s also about rallying the supporters. Alan Sprints has been brewing his Hair of the Dog beers since 1993. He’s received a ton of press over the years. And people travel from around the globe to try his Adam, Fred and other big beers.

BETHANY: Put on green dot on your calendar for April 21 because Green Dot grabbed 56 percent of the vote and will meet Fort George in the Sweet 16 on that date.

AMBER: Ten minutes after number one seed Hop Venom beat number eight seed Royal Fresh by 55 votes, Boneyard Beer owner Tony Lawrence stepped into the entrance of Boneyard brewhouse. Boneyard brewers were texting family members, conducting interviews, and watching themselves on YouTube when the familiar voice of Lawrence cut through the joyous din. “Hop Venom is a hell of a beer,” Lawrence probably said, pausing for a moment. “You just beat the best. You should be proud.”

BETHANY: Tony would know. He started is brewing journey at Deschutes just after turning 21. He has a lot of respect for Deschutes as proved when he allowed Deschutes to acquired his Boneyard, forming a joint venture between the two Bend breweries. This win has to feel good for him.

AMBER: Let’s weed through the hops. The following are advancing to the Sweet 16:

BETHANY: OK, Let’s dive into today’s sweet 16 double IPA battles. Please vote for one beer per game. Voting for today’s double IPA battles ends at 11:45 p.m. The winners will be announced tomorrow morning around 10 a.m., followed by the next four Sweet 16 games.

AMBER: Ladies and gentlemen, please join in the singing of our national anthem.

BETHANY: You rock Nita Strauss! OK, let’s get to voting!

AMBER: The last decade has brought a resurgence of such craft breweries across the country. The coolest not only make outstanding beer but also are designed with a sense of place in mind. Holy Mountain and Structures brew great beer. That much is obvious. But it’s not the only factor that landed them both with high nominated seedings in this tournament. Their taprooms are sparse and hip. Dust bowl chic clothing, beards, and thick-rimmed glasses stand in line for hours for their limited releases. Stereogum would approve of their brewhouse playlists. They’re cool. 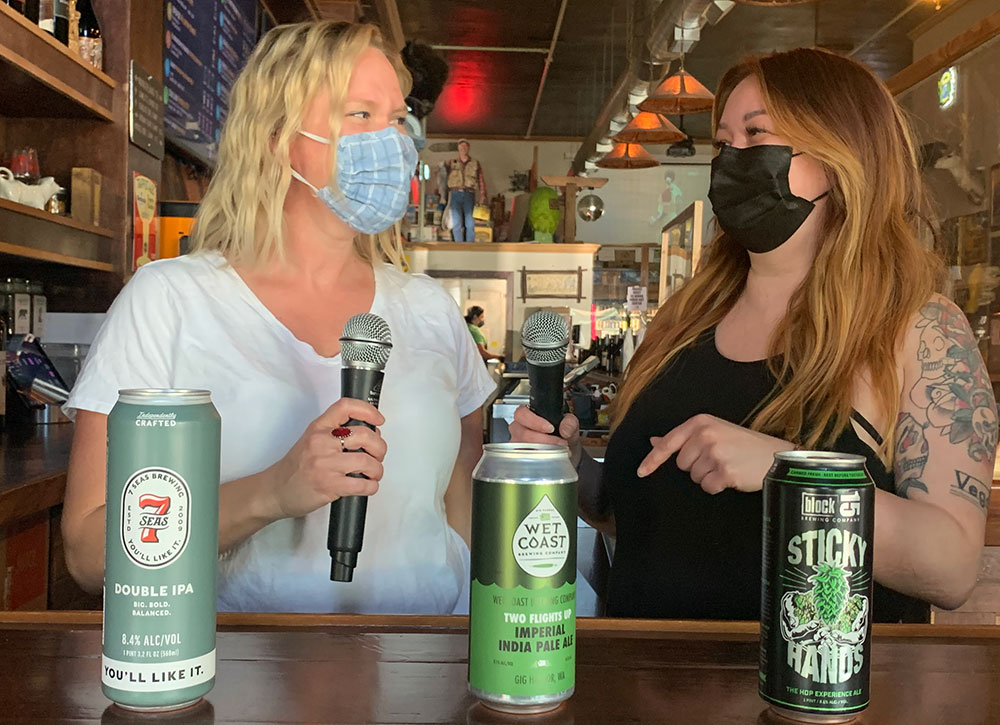 AMBER: I have it on good authority that Wet Coast Sales Executive Paul Whitcomb and 7 Seas Sales Executive David Maravilla traded arm punches in between discussing beer styles like a genealogist with a family tree in the nose-bleed section of T-Mobile Park last Friday. They have a bet on this game. Keep your eye on the Internets.

BETHANY: Although different — deep ruby 7 Seas Double leans toward the pine and bitterness while light colored Wet Coast Two Flights Up has a bit more fruit flavor and medium bitterness — both are expertly brewed, clear, refreshing double IPAs. This isn’t a no-brainer vote. You’ll need to search within — either ballz deep or two flight up.

AMBER: Best brewery in Oregon? Great Notion and pFriem are always at the top of the list, topping the list many times. Great Notion invented hazy IPAs and culinary ales. pFriem brews all styles by the book. Expect a match-up more like Scott Pilgrim vs. the World rather than Batman vs. Superman.

BETHANY: Ready for you vs. the Peaks’ Tandem-16 voting machine? Vote!

AMBER: Baker City and Corvallis are staring each other down today as Forklift and Sticky Hands get ready for Civil War, the state’s new annual clash. East versus West — both cities were once statewide hubs. Both breweries the main brewpubs in each of their respected cities.

BETHANY: This is not a lupulin cake walk for Sticky Hands. No, indeed. Forklift could drive away with the win with its 4.12 Untappd rated, West Coast piney hoppy bad self. 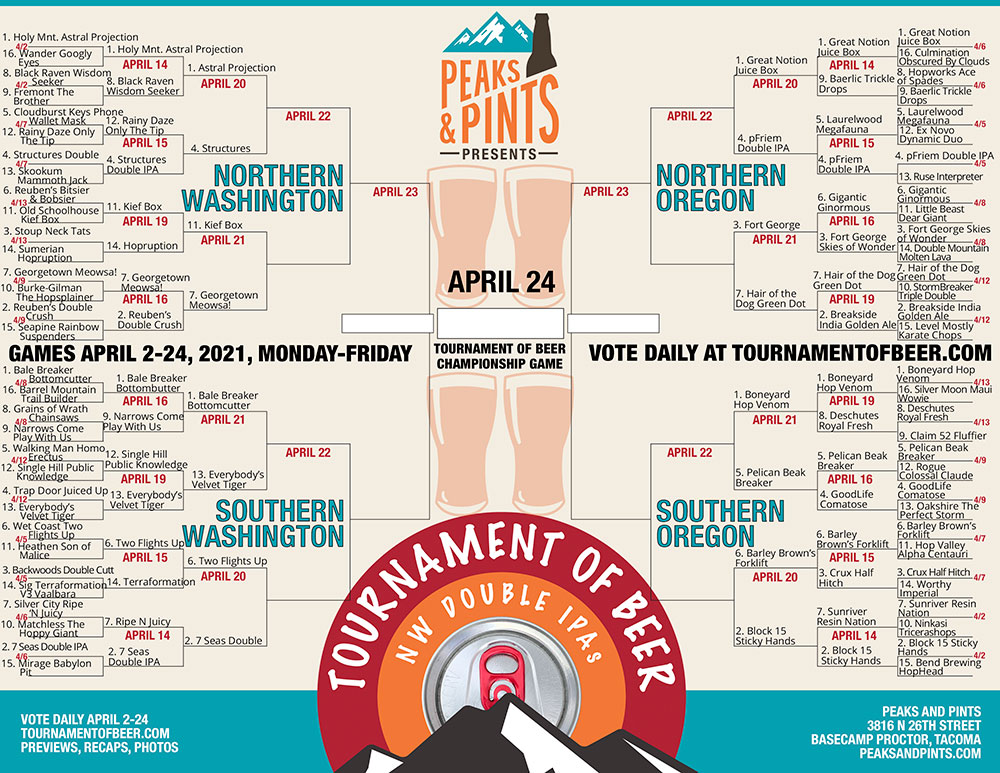