Peaks and Pints Pilot Program 4/20 On The Fly

There’s no shortage of things you can do to celebrate 4/20, like, say, visiting numerous dispensaries and buying copious amounts of deeply discounted cannabis and cannabis products, and then, you know, consuming them, perhaps in a Mrs. Butterworth’s bong or Cheech & Chong joint. Hey, so long as you consume responsibly and don’t drive afterward, of course. But there are things happening on 4/20 that are a bit more, shall we craft beer oriented, such as drinking beers that are “dank,” a term that means pungent, funky and odoriferous, to both good weed and very hoppy IPAs. Dank means an extremely overpowering odor that can smell like the citrus and pine flavors everyone loves. Dank beers are ones that can easily fill a room with its odor, just like dank marijuana. After all, beer hops and weed nugs are similar in taste and smell, and the characteristics of a particularly dank, hoppy beer can often be found in a jar of particularly dank, primo weed. Or so we’re told. Hops and marijuana both contain terpenoids, compounds that give the plants similar characteristics. In fact, both fall into the taxonomic family Cannabaceae, so it follows that you could create a fairly stinky beer with the right treatment of the right hops. Hops don’t get you high, but in smell, taste and appearance, they often feel just about as … dank. Enjoy our to-go flight, Peaks and Pints Pilot Program 4/20 On The Fly.

Peaks and Pints Pilot Program 4/20 On The Fly 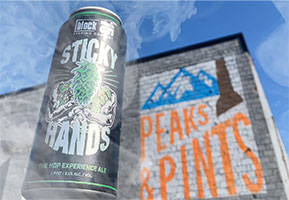 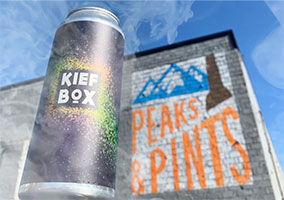 Yesterday, Old Schoolhouse Kief Box squeaked out a win against Sumerian Brewing’s Hopruption for a seat in the Sweet 16 of the Peaks and Pints Tournament of Beer: NW Double IPAs. A collaborative brew between Old Schoolhouse Brewery and Yakima Chief-Hop Union, this dank West Coast style double IPA is brewed with massive amounts of Simcoe, Citra, and Mosaic cryo hops, It may be hazy, but this is not a New England-style IPA. It’s a very dank and weed-like West Coast IPA that just happens to be hazy, and hoppy. 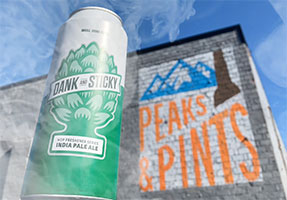 When cannabis plants start to mature, they also go through a brief transitional period; a sort of cannabis-puberty if you will. And just as humans undergo a burst of rapid growth, cannabis plants will also create a large portion of their final height in a very short period of time. This explosion of vertical grow this commonly called the cannabis “Flowering Stretch.” Gigantic Brewing and E9 Brewing stretch together on Stretchin’ Out, a dank, slightly sweet West Coast double IPA with pine and an herbaceous finish.