SARAH JANE: Good day, ladies and gentlemen, and welcome to the 2021 Peaks and Pints Tournament of Beer: NW Double IPAs from the historic Proctor District in beautiful Tacoma, Washington. I’m Peaks and Pints bartender Sarah Jane and I’m thrilled to be calling today’s games with my fellow bartender, Erin.

ERIN: Thanks Sarah Jane! You can think of a double IPA as a beverage made from (essentially) four ingredients using four main steps. The four basic ingredients in beer are malt, hops, yeast and water and the four basic steps are malting, mashing, boiling and fermenting. Although, if Peaks & Pints is in the brewhouse, then add drinking a pint to every step. But hidden within this simple formula is a universe of variety. Clear or hazy? Old-school malty bitter piney or new-school fruity and juicy? Double dry hopped? Milkshake-y? Everyone who brews beer, from homebrewers to Georgetown Brewing, has choices to make. And in those choices lie the path to greatness.

SARAH JANE: The field of 64 Pacific Northwest brewed double IPAs was been voted down to 24 in the mother of all double IPA brackets. You’ve seen the carnage: No. 3 seeds fell, powerhouses butted heads, and hazies are making a run at the prize. Welcome to day three of the Second Round. …

SARAH JANE: Rainy Daze should have used more than just the tip.

ERIN: It’s shocking, but not shocking. Rainy Daze is a veteran of this Tournament. Their Goat Boater freakin’ won our first Tournament, Washington state IPAs. But, Structures has the hipsters, and frankly everyone else who enjoys well-made craft beer. Structures Double IPA moves into the Sweet 16 with 56 percent of the vote. 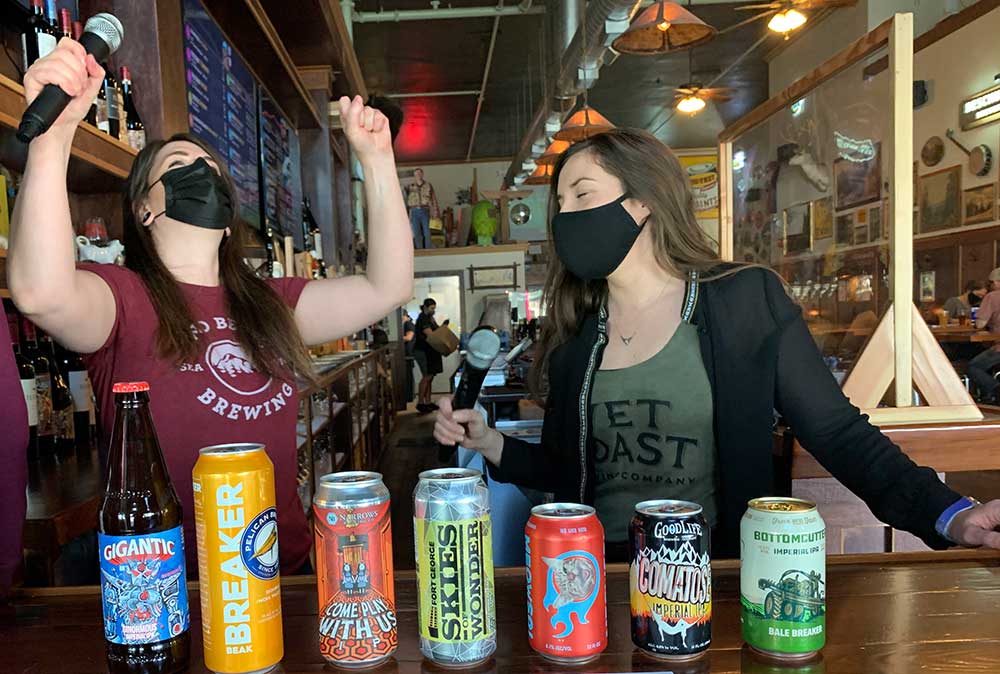 SARAH JANE: R-E-S-P-E-C-T is how the song goes, and that’s just what Wet Coast Brewing has been earning so far in the Tournament of Northwest Double IPAs, beating Heathen in the First Round, then knocking off Sig Brewing yesterday with 59 percent of the vote.

ERIN: This is all more impressive when you consider Sig took out Backwoods Double Cutt just a round earlier, meaning, — by the power of Tournament of Beer deduction — Wet Coast, and its Two Flights Up double IPA — can claim superiority over both. Wet Coast moves into the Sweet 16 to take on what, no doubt, will be the fight of its life, 7 Seas Double IPA.

SARAH JANE: Wet Coast might consider adding another floor to their double IPA for this game.

SARAH JANE: Who went home with nothing to show but a bin of spent grain? No delay, no suspense, I’m just going to rip the band-aid off in one strong tug: Megafauna was knocked off.

ERIN: You sure did. pFriem Double IPA moves into the Sweet 16 with an impressive 66 percent of the vote.

SARAH JANE: This game’s outcome has Pappi Swarner a bit worried. Barley Brown’s Forklift beat Crux’s Half Hitch — I said Half Hitch! — by 59 percent of the vote. Barley Brown’s makes exceptional beer, and always in the top 5 when best Oregon breweries are the subject. But, the winner of this dang Tournament receives a permanent handle through the spring and summer, and we don’t own a Star Trek Transporter to get us to Baker City, Oregon, to pick up kegs. Still, Barley Brown’s on tap for nearly five months?

SARAH JANE: Let’s weed through the hops. The following are advancing to the Sweet 16: 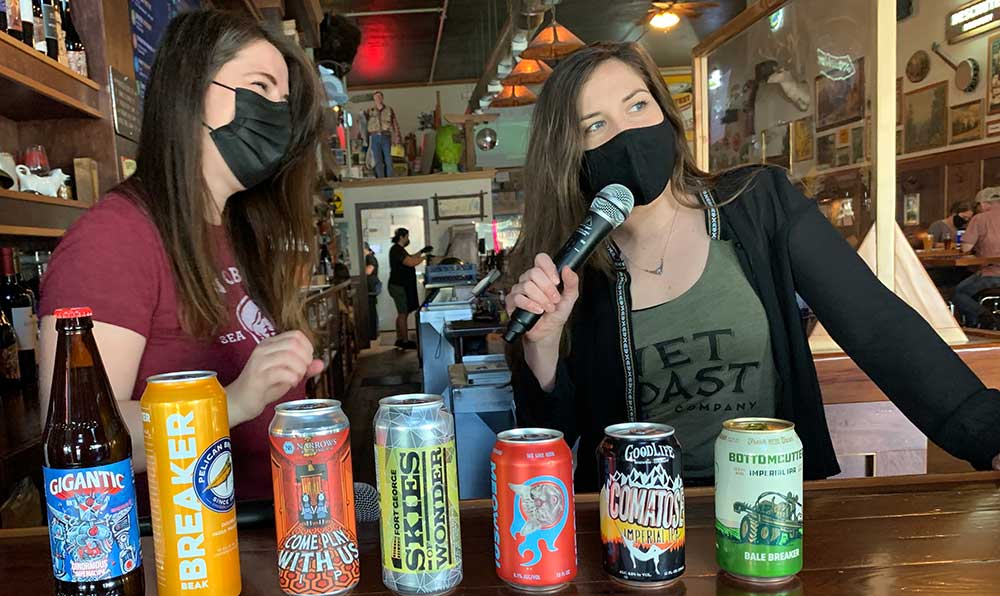 ERIN: Thank you Marvin Gaye! OK, let’s get to voting!

SARAH JANE: Both of these breweries have rabid fans and die-hard supporters, as well as popular double IPAs; therefore, this beer battle may be the most hotly contested of the day. Georgetown Meowsa proved it could eliminate an award-winning double IPA when it knocked off Burke-Gilman Brewing’s The Hopsplainer. Can it do the same with quite possibly the most beloved hazy double IPA in Seattle?

ERIN: Mobilize your base, Georgetown and Reuben’s, and get out the vote! 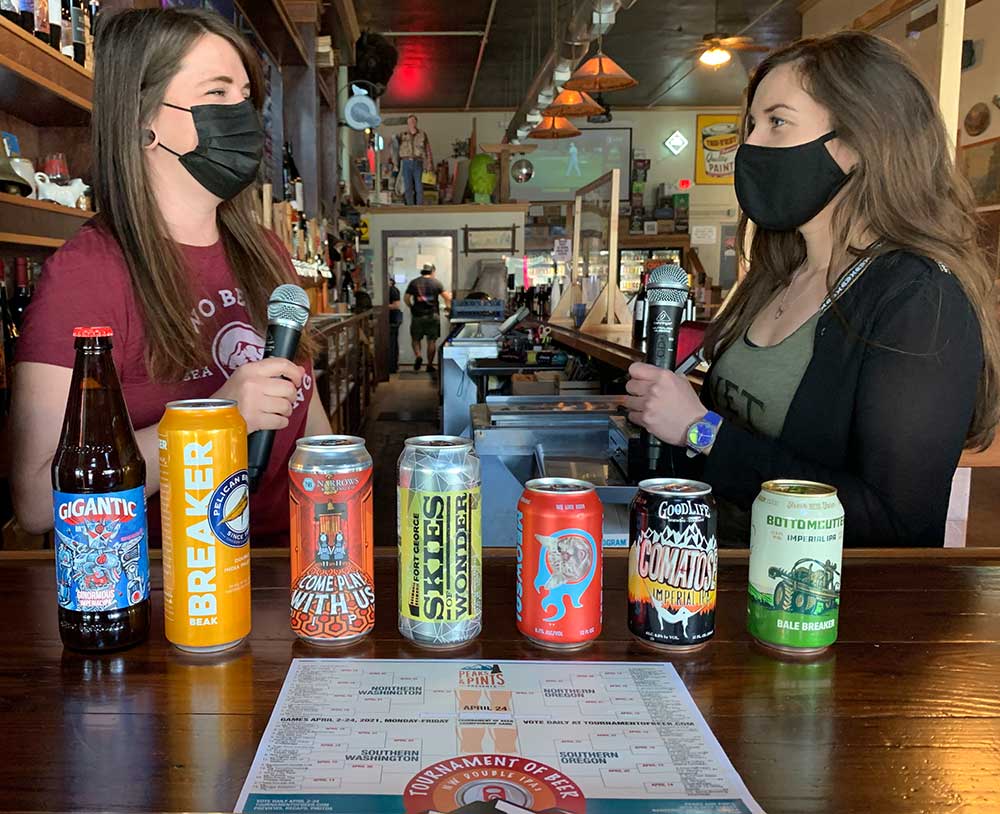 ERIN: Do you like delicious double IPAs? Then how the hell are you going to choose between these two beers? Bottomcutter received the most nominations during the seeding process. Come Play With Us was brewed for Halloween 2020 and it was so popular it was nominated as an eighth seed. Logic says the year-round, number one seed Bottomcutter has this. Then again, do you want to say no to The Shining‘s identical twin girl ghosts in their light-blue dresses, knee-high socks and black Mary Jane shoes who, at a moment’s notice, can reveal their bloody and butchered death?

SARAH JANE: Fort George and Gigantic have already gone head-to-head in their brewhouses. Chugging beers. The stakes are going to be a little higher today when the two square off for a bid into the Sweet 16, and while it won’t be a friendly competition, the two friends have cheered each other on from the start of the Tournament.

ERIN: After collaborating in 2013 with Fort George as part of the inaugural 3-Way IPA that also included the now defunct Lompoc Brewing, Gigantic reunited with Fort George when they brewed a double IPA, Crystal Visions, in Gigantic’s brewhouse.

ERIN: Whoa, OK, here we go. Two breweries with huge followings battle it out today. Number 5 seed Pelican Beak Breaker prints votes. GoodLife Comatose has the backing, and the beer, to break the Beak. It should be noted the largest voter turnout in the Tournament of Beer history happens when Pelican hits the court.

SARAH JANE: Unless it’s in a coma. 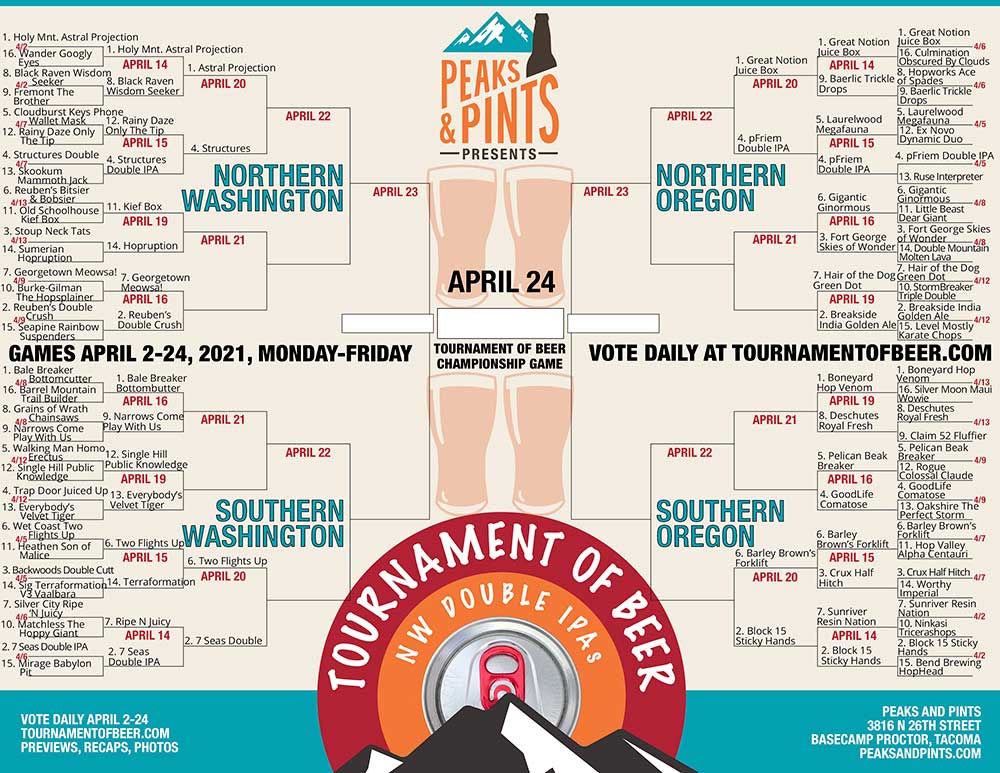