PHAEDRA MILLER: Everyone drinks them. Everyone has a favorite. Loyalty? It can inspire the rabid fandom of a true pale and light lager devotee. Maybe your obsession is with hoppy lager from Washington state — or perhaps you drive across the Columbia River for an American lager that’s probably written up in the Scientific Journal. Maybe you’re an adherent of a particular country’s lager style, declaring all others, in your jingoistic ethnic fervor, treasonous. Welcome to day two of the Peaks and Pints Tournament of Beer: Northwest Lagers Sweet Wort Sixteen. I’m Peaks bartender Phaedra Miller.

BRANDON CRESPIN: It’s Miller time! Glad to be calling the Tournament with you, Phaedra Miller. I’m Peaks bartender Brandon Crespin. The best lager in the Pacific Northwest? You think you know where to find it. We all do. After weeks of feverish voting (and with the help of a complicated computer program stolen from cavemen) we at Peaks & Pints have watched you, beloved Peaks & Pints Pals, narrow down the region’s lagers to the very best 16, the cream of the lunch pails. Yesterday, the first eight lagers did battle. Today, the remaining eight go at it. Slap us with some Saccharomyces pastorianus yeast and can us — this is exciting!

MILLER: Brandon and I will walk you through yesterday’s action, and then preview the final four games of the Sweet Wort Sixteen. If you would like to vote immediately, then click VOTE NOW.

MILLER: It’s always fun when a Tournament of Beer battle pits two breweries with social media game — such as Chuckanut Brewery and Burke-Gilman Brewing. Even though Chuckanut has been in almost every Tournament of Beer, and seen the Championship Game twice, Burke-Gilman kept a two-bicycle wheel length distance behind the Asian Style Lager the entire game. In fact, every time Chuckanut’s lager made a run, Burke-Gilman would hold up a poster of Bill the Beerman and the Vitamin R would go nuts.

CRESPIN: When the final buzzer sounded, Chuckanut Asian Lager had 55 percent of the vote and a slot in the Ethanol Eight. 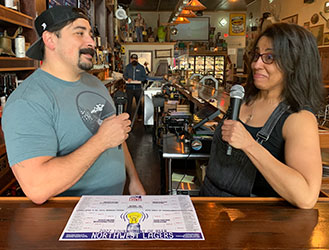 MILLER: We have mention numerous times a competition such as the Tournament of Beer can ruin friendships. When there’s a lager on the line, people can get weird. Years of friendship can be washed away over a Mexican lager or hoppy lager argument. We’ve heard there have been at least three incidents of Peaks & Pints six-pack carriers being lit on fire and left on doorsteps. This game won’t help relationships close to deterioration. The admiration and love for Wet Coast and Everybody’s goes beyond beer, beyond stickers, and beyond pedigree. It’s the people. How many times has Wet Coast Sales Executive Paul helped people move? Or, how about the many times Everybody’s co-founder Doug Ellenberger offered to carry someone’s clubs.

BRANDON: Everybody’s Local Logger hauled 62 percent of the vote yesterday and moves into the Ethanol Eight. Hallmark is going to have a busy day.

MILLER: Despite a late shift from Ruse Brewing’s Shifting Dreams, pFriem Family Brewers’ Mexican Lager and its large, devoted, Columbia Gorge following proved too powerful in yesterday’s action, grabbing 60 percent of the vote and catapulting into the Ethanol Eight with a resounding victory. Some analysts claim pFriem’s use of Jacobson Sea Salt for savory notes was the deciding factor. Other analysts say Ruse opening their Crust Collective Detroit style pizza joint in Vancouver, Washington, four days ago was too much of a distraction. pFriem’s Mexican Lager has one day to rest before it begins Ethanol Eight play.

BRANDON: I can tell you what will be shifting my dreams tonight: Ruse beer paired with pizza!

MILLER: Do you want to enjoy a lager that encourages re-planting trees before gazing at stars at the brewery’s observatory or do you want to enjoy a lager memorializing a former bartender and wildland firefighter on a kickass patio? The former Worthy Brewing Tenmile Dry-Hopped Lager is brewed with Strata hops for a hoppy and fruity front end. The latter Wild Ride Brewing Cole’s Lager is clean, crisp, lightly sweet. That was the gist of this close game yesterday with Wild Ride edging out Worthy by two votes.

CRESPIN: Let’s wade through the chilled wort. The following are advancing to the Ethanol Eight:

MILLER: It’s time to wrap up the Peaks and Pints Tournament of Beer: Northwest Lagers Sweet Wort Sixteen with the last four games today. Please vote for one beer per game. Please only vote once. Voting for today’s four games ends at 11:45 p.m.

CRESPIN: But first please join in singing our National Anthem.

CRESPIN: Thank you, LeAnn Rimes! Let’s get to voting! 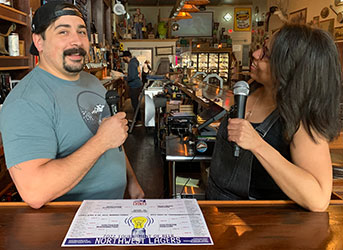 MILLER: Bellingham’s lone lager left Kulshan Premium Lager battles the popular Holy Mountain Holy Light. Talk about a heavyweight battle. A matchup like this is why we created the Tournament of Beers. Everyone knows the lagers at Kulshan and Holy Mountain are just about as good as it gets. But whose lagers has the ever-so-slight edge? Needless to say, it’s debatable. It’s also vote-able – which is where you and your finger come in.

CRESPIN: Who will move into the Ethanol Eight to face Chuckanut Brewery’s Asian Style Lager? You can help choose right now. …

MILLER: Throwing down from their brewhouse in Tacoma’s Historic Brewery District, fan favorite E9 Brewing only used nine tactics in its win over Well 80 Brewhouse’s Original Lager ’64, followed by a huge win over Heidelberg Premium Lager. Today, they face another strong South Sound brewery, Headless Mumby Brewing and their Local 66 Lager. Does Local 66 Lager have anything left after a brutal battle with Top Rung Brewing’s Lacey Lager? If Headless keeps their head on straight, mumbles at the weather, and doesn’t add a third “6” to their lager, my guess is E9 Brewing won’t detour from what got them to the Sweet Wort Sixteen and possibly take it to an 11. 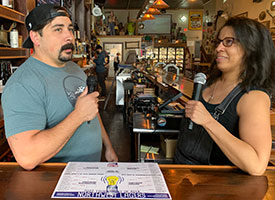 MILLER: Fort George Brewery’s 1811 Lager is making a strong run at the Ethanol Eight as most predicted. However, the Oregon beer powerhouse is close to releasing their annual 3-Way IPA at their Lupulin Ecstasy festival. They must stay focused. Wayfinder Beer Brewmaster Kevin Davey could just invent something that would turbocharge his Number 6 American Lager and blow minds, as he does.

CRESPIN: On paper, this is the sort of game that receives national attention and possible could be bought by Elon Musk, somehow. But the Tournament of Beer: Northwest Lagers isn’t played on paper; it’s played on our computer running Lindows operating system. Vote now!

MILLER: Pacific City, Tillamook, Portland, Hood River, The Dalles, Pendleton, Enterprise — that’s the 419-mile route you would have to travel to drink a Pelicano Extra and Landmark Lager today. It’s basically a Pacific Ocean to Idaho border route. You would see a smile once you arrived at Terminal Gravity after they beat number one seed Block 15’s Sol Fresco in the Second Round. You would see a beak once arriving at Pelican Brewing. Pelican has the experience, multiple taprooms, and an amazing phone tree. Terminal Gravity has the Landmark Lager, which apparently is enough.

CRESPIN: Let’s get ready to rumble (or drive for some). 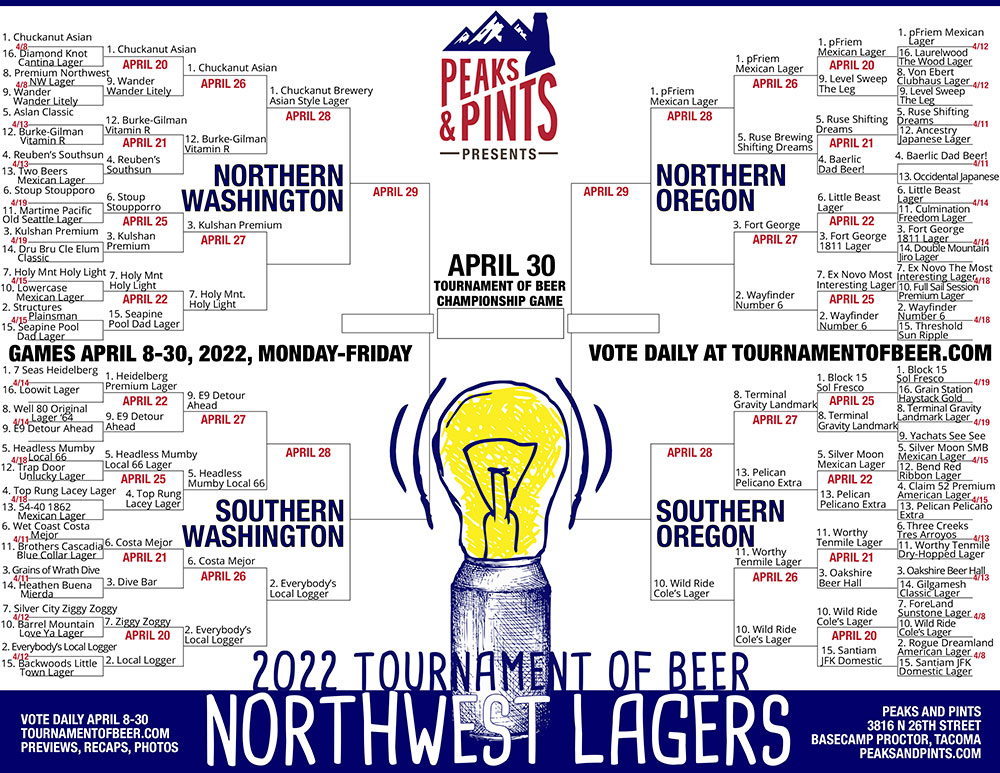