AMBER HAMILTON: Hello folks! I’m Peaks bartender Amber Hamilton. For the last two weeks Peaks & Pints presented you with a compelling question: What are the best lagers brewed in Washington and Oregon? And you have responded in droves. Sick days have been used. Friendships have fallen apart. Beer Cooler Stockers and Beer Line Cleaners seeking comfort in new relationships — mass hysteria!

BRANDSON CRESPIN: The competition has been whittled down to the Sweet Wort Sixteen. Greetings everyone, I’m Peaks bartender Brandon Crespin. Yes, 16 Northwest pale and light lagers are poised to make the final push to the Final Four, which will be held Friday.

HAMILTON: So, read up on yesterday’s action, and then vote on the first four games of the Sweet Wort Sixteen. It’s in your hands, mouth, and stomach, folks. Do us proud. Oh, if you would like to vote immediately, then click VOTE NOW. 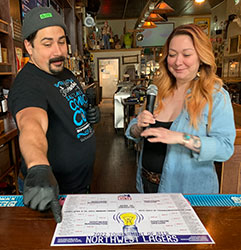 HAMILTON: According to the Beer Judge Certification Program, premium beers “tend to have fewer adjuncts than standard/lite lagers and can be all-malt. Strong flavors are a fault, but premium lagers have more flavor than standard/lite lagers.” Yesterday, Stoup Brewing’s Super Premium Japanese Style Lager battled Kulshan Brewing’s Premium Lager with the Bellingham Premium taking the “Super” out of the Stoupporro. At the final buzzer, Kulshan had 73 percent of the vote and moves into the Sweet Wort Sixteen.

CRESPIN: It’s rumored Kulshan took the “Super” out Stoupporro Super Premium Japanese Style Lager with Kryptonite. I tend to believe that the Bellingham community put on their rally caps and voted en masse.

HAMILTON: After weeding through the shenanigans, Headless Mumby with its delicious light yet flavorful lager and impressive social media push grabbed 59 percent of the vote and will face E9 Brewing’s Detour Ahead tomorrow.

CRESPIN: Both breweries had fun with this game online, which is awesome. 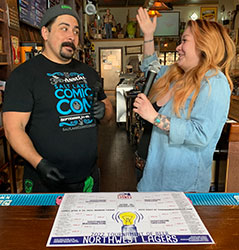 CRESPIN: I also saw The Holy Grail stopped looking for The Most Interesting Lager In The World.

HAMILTON: Terminal Gravity Brewing’s Landmark Lager had the lead until 7:07 p.m. when the game became tied. That makes sense, as Terminal Gravity sits in Enterprise, an eastern Oregon pioneer town. Folks turn in early as there are daily early morning chores. It’s also the time when Block 15 Brewing’s Sol Fresco Mexican Lager starts to party. Then, the Enterprise rooster said, “Oh cluck no!” and woke the town up around 10 p.m. When the final buzzer blew at 11:45 p.m. Landmark Lager had 51.7 percent of the vote and a date with another Oregon Mexican Lager, Pelican Pelicano Extra, in the Sweet Wort Sixteen April 27.

CRESPIN: Let’s wade through the chilled wort. The following are advancing to the Sweet Wort Sixteen:

HAMILTON: But first please join in singing our National Anthem. 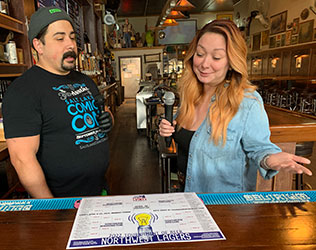 HAMILTON: In Chuckanut Brewery’s South Nut production facility in the middle of Burlington farmlands reside some of the most delicious lagers you’re likely to find. A patio and lawn spread before the giant, dark red building. Grab a lager and, sit out in the sun and tell us it doesn’t feel special. Chuckanut Asian Style Lager beat Diamond Knot’s Cantina Lager and Wander Brewing’s Wander Lightly to reach the Sweet Wort Sixteen.

CRESPIN: Burke-Gilman Brewing also has a patio, but under Tivoli lights and cherry blossoms. A bike rack awaits next to the patio, which makes sense since the famed Burke-Gilman Trail is nearby. This game might make Vitamin R feel like a ninth grader walking down the senior hall for the first time. Let’s not forget that the public seeded Vitamin R in the 12th slot of the Northern Washington Region yet beat #5 seed Aslan Classic and #4 seed Reuben’s Southsun.

HAMILTON: Wet Coast Brewing and Everybody’s Brewing have strong, fun, and engaging ownership that their staff adores. Gig Harbor has more than triple the population of White Salmon, but Everybody’s has a kickass kitchen. Wet Coast has a small footprint, but cool Prohibition themed beers. Everybody’s has a fancy pants building and plant-adorn deck. Control the vibe, control the game.

CRESPIN: Wet Coast Costa Mejor vs. Everybody’s Local Logger could end relationships, cause car title exchanges, and fill the tattoo shops with sad faces. These two lagers are equally impressive and fun. Glad you’re voting and not us.

CRESPIN: How does a bastard, orphan, son of a whore / And a Scotsman, dropped in the middle of a forgotten spot / In the Caribbean by providence impoverished / In squalor, grow up to be a hero and a scholar?

HAMILTON: Brandon! I appreciate the Hamilton lyrics, but you smothered my lovely international lager lead-in. We have a Mexican lager and a Japanese lager each brewed to style by a brewery that is considered tops in Oregon. It just might come down to what people order for lunch and dinner today.

HAMILTON: I feel like we’re the announcers in the film, Best of Show, and you know which character you are!

HAMILTON: Worthy Brewing and Wild Ride Brewing beat the number two and three seed lagers in Southern Washington First Round action, respectively. They also found success in the Second Round. Central Oregon has a tough decision today. This game could go either way.

CRESPIN: It’s going to be a worthy wild ride, indeed.