Peaks and Pints Pilot Program: Pretzel Pairings On The Fly

National Pretzel Day is here again. Before you go thinking that Peaks & Pints made up this holiday, so we’d have an excuse to serve our pretzels, let us assure you it’s a real thing. Since 1986 National Pretzel Day has been celebrated annually on April 26. Former Pennsylvania Representative Robert S. Walker declared this day as National Pretzel Day in honor of his favorite snack. This doughy, twisted treat has been enjoyed since the Middle Ages. According to legend, Italian monks first invented the pretzel as a reward for pious village children. It didn’t arrive in America until the 18th century by German immigrants settling in Pennsylvania. You’re going to need something to wash that pretzel down with. Just about any beer will work with a pretzel, but to make the most out of the match you’ll want to pick a beer that complements the doughy and toasty knot. Classic German beer styles really shine here. If you’re leaning toward Peaks & Pints pretzels with beer mustard, a dark lager or a bock that will be able to hold up to that on the palate to cut through some of the mustard’s vinegar flavor. A Märzen or (Märzenbier) is a Bavarian lager, with a medium to full body. It’s toasted malt flavor profile, play well off the crisp, outer skin of a traditional soft pretzel. A good old helles or Vienna lager are a close runner-up for best pairing with a classic soft pretzel. A bright, hoppy pilsner or a dark and malty dunkel weisse are great matches too. Peaks and Pints Pilot Program: Pretzel Pairings On The Fly is our to-go beer flight to pair with this special day.

Peaks and Pints Pilot Program: Pretzel Pairings On The Fly 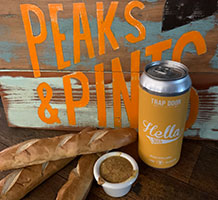 Helles is a German style blonde lager that is one of the few beers with an actual birth date of March 21, 1894 courtesy of the Spaten Brewery in Munich. The Münchner (Munich) helles is a light golden- to straw-colored German lager known for being medium-bodied with an emphasis on malt character and low bitterness. Trap Door Brewing came up with a hella good example of the style, Hella. Brewed with Weyermann’s Barke line of malt, a simple and refined grist, combined with Hallertau Mittelfruh hops, and 5-plus weeks of lagering, for floral hop notes followed by a biscuit like finish and clearing bitterness. 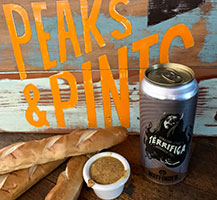 Italian brewer Agostino Arioli learned to brew in Germany. He returned home in 1997 to help start the Italian craft beer movement, drawing on the German pilsners he had already learned to brew. Birrificio Italiano, Arioli’s brewery in Limido Comasco, a small town southwest of Italy’s Lake Como, began brewing the Italian pilsner Tipopils, the original gangster of Italian pilsners, and it is widely given credit for starting the trend. Wayfinder Beer’s version is a collaboration with Heater Allen and Modern Times. Their Italian-style horror pilsner is brewed with spice-heavy German Spalt Select and Tettnanger hops, then dry hopped with Polaris and more Tettnanger, krausened with fresh Czech pils wort, and cold-conditioned to deliciousness. 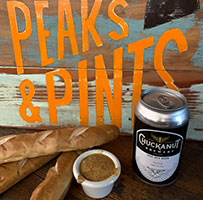 Vienna lagers originated around Vienna in the mid-1800s, but its popularity faded until Austrian brewers who immigrated to Mexico created a following there. The Vienna lager is often closely associated with märzen and Oktoberfest styles, but historically the malt used for the Vienna was more highly kilned, leaving it with more light-roasted qualities. Chuckanut Brewery’s multiple award-winning Vienna Lager is brewed with half Vienna malts creating a delicate amber lager with a slightly caramelized and toasted malt character balanced by a subtle hop presence for hints of yeast, slight herbal, spice, and grass hops, finishing sweet and slightly dry. 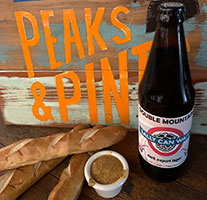 Double Mountain Brewery’s Sally Can Wait Dark Export Lager is an ode to 1990s Britpop — specifically Oasis’ “Don’t Look Back In Anger.” The crisp, malt and yeast driven dark lager will dampen the sandwich’s spirit, much like Noel Gallagher leaving his brother, Liam, and their Oasis band, for cosmic pop music. Bonus: Double Mountain brewers created the accompany Spotify playlist “Sally Can Wait” to pair Britpop with their lager. 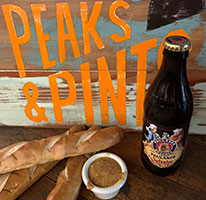