Peaks and Pints Pilot Program: Bourbon County 2021 On The Fly

Goose Island Brewing Company first brewed the bourbon barrel-aged imperial stout in 1992 to commemorate the 1,000th batch of beer made at the company’s Clybourn brewpub. Since that time Bourbon County Stout has grown into a highly anticipated annual release, occurring on Black Friday. When Goose Island concocted its first Bourbon County Brand Stout, the practice of barrel aging beer took an intoxicating turn. After three months inside used bourbon distillery barrels, the brew had a complex oak character from the wood and rich flavors from lingering whiskey — characteristics that made the Bourbon County Brand Stout an instant hit. Here it is November 2021, and Goose Island Bourbon County Brand Stout is still very much a thing, and so are its variants. Since Peaks & Pints caps the limit at two each of BCBS 2021 and one each of the variants, technically we have a to-go flight that we call Peaks and Pints Pilot Program: Bourbon County 2020 On The Fly.

Peaks and Pints Pilot Program: Bourbon County 2021 On The Fly 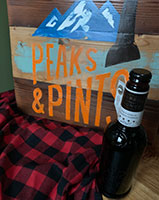 Goose Island has been producing Bourbon County Stout since 1992, long before Anheuser-Busch InBev acquired the brewery in 2011. The Chicago craft brewery began packaging the stout in 2005 and first experimented with variants in 2009. The tradition of introducing it on the day after Thanksgiving began in 2010. This year’s Bourbon County Stout is blended using bourbon barrels from the likes of Heaven Hill, Wild Turkey, and Buffalo Trace. There’s a pleasant dark chocolate thing going on with hints of vanilla and barrel oak. 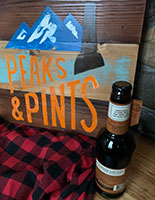 Goose Island finished Bourbon County Stout with honeycomb-shaped cherry wood. It’s a process they’ve never attempted before. The use of cherry wood instead of real cherries provides more subtle hints of cherry flavor and therefore there isn’t any chocolate-covered cherry happening here. Caramel and dark chocolate sweetness round out the flavor. 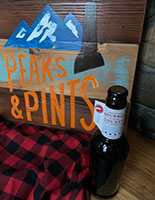 Goose Island digs into the Proprietor’s (Chicago-only release) vault to bring back a fan favorite with Bourbon County Fourteen Stout paying homage to the popular Proprietor’s 2014 recipe but upping the rye ante by adding rye to the mash bill. Layering cassia bark, cocoa nibs, panela sugar, and coconut water, this stout has an intricate, sweet and spicy flavor profile. 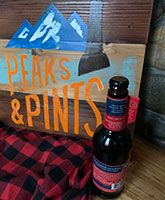 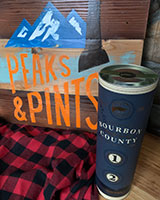 Aged first for a year in Elijah Craig Small Batch barrels and then another year in Elijah Craig Toasted Bourbon barrels, Goose Island Bourbon County Double Barrel Toasted Barrel Stout offers chocolate, some vanilla, oak, and a dark fruit finish. It’s the booziest of the bunch, but even at 16 percent the heat isn’t over-the-top.