Peaks and Pints Pilot Program: Bale Breaker On The Fly

Hops have long defined life at B.T. Loftus Ranches in the Yakima Valley. Back in 1932, Kevin Smith and Meghann Quinn’s great-grandparents founded the family hop farm that’s now run by their older brother, Patrick. Meghann and her husband, Kevin Quinn, and younger brother were keen homebrewers. Wouldn’t it be natural to start a brewery on the farm? In 2013, the trio took down three acres of the farm’s Field 41 and built Bale Breaker Brewing Company, which is surrounded by fields of hops. Bale Breaker has grown to become the fourth largest independent craft brewery in Washington. With a 30-barrel brewhouse and a 27,000 square foot facility, they craft five year-round canned beers, including the widely celebrated Topcutter IPA. We also have a 5-barrel pilot brewhouse, the Imagination Station, where they test and develop new recipes. In conjunction with the release of their Ales for ALS PNW Collaboration Hazy IPA, we present an Bale Breaker to-go beer flight that we call Peaks and Pints Pilot Program: Bale Breaker On The Fly.

Peaks and Pints Pilot Program: Bale Breaker On The Fly 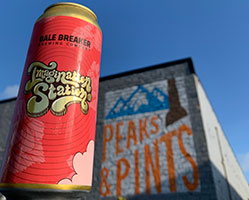 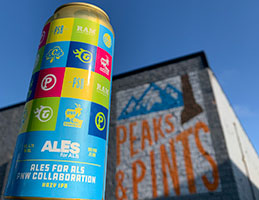 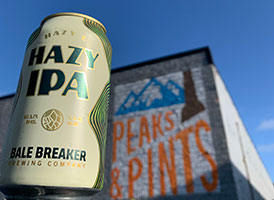 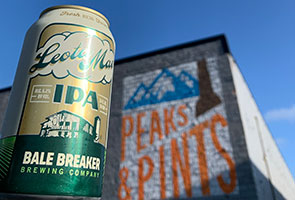 “A strong woman exudes confidence and self-respect. She’s often regarded as the ‘alpha female’ within a group and lights up any room she enters. She knows what she wants and is in control of her life. I respect that. Everything I’ve read paints a picture of Leota Mae being a strong female. She’s the great-grandmother to the family running Bale Breaker Brewing in the Yakima Valley. The matriarch of their family, she worked sunrise to sunset cultivating the land they still farm today. This sweet malt, crisp citrus hop IPA is a delicious tribute. Oh, and my camping buddies and I drank a bunch of it in Leavenworth two summers ago. It’s so f—ing delicious.” — Peaks and Pints bartender Nicole Allen 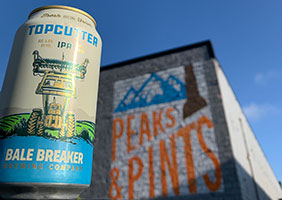