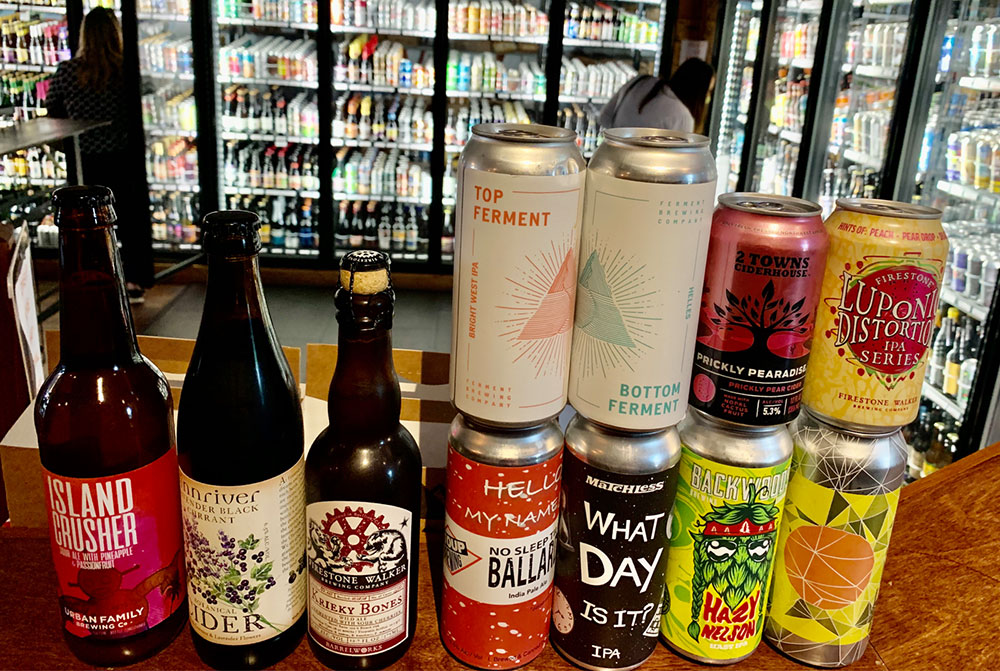 Peaks & Pints is still in take-out and to-go mode. Here are new arrivals for your abode mode.

PRICKLY PEARADISE: It’s a semi-dry and sweetened with organic blue agave. This bright berry-colored cider is bold with intense flavors like watermelon, raspberry and bubblegum. 5.3%

HAZY NELSON: Backwoods Brewing’s newest creation is an ode to another captivating presence of braided peace and song; he croons a melody of story like a shotgun into stardust. They call him Nelson. He is always on Backwoods’ mind. Hazy Nelson is brewed with Nelson Sauvin and Southern Cross hops providing earthy, dank, peach-like aroma and flavor plus grapefruit zest and bitter dryness. 6.7%

LAVENDER BLACK CURRANT: Finnriver Lavender Black Currant Cider celebrates the botanical bounty and beauty of the Olympic Peninsula. This refreshing purple-hued sparkling cider features the organic Washington apple fermented and blended with the sweet and tart delights of black currant. Add to that the delicate floral notes of organic Sequim lavender, sourced from Purple Haze farm, and you have an aroma of strong lavender, currant, Concord grape, and honey, followed by lavender, tart currant, grape, and apple flavors. 6.5%

BRIGHT WEST IPA: This traditional West-Coast IPA starts with Pilsner malt and adds Cascade, Chinook, and Mosaic hops resulting in a dry, golden ale with the aroma of pine and citrus. Canning has just begun at Ferment, and the labels feature artwork from Oregon artist and snow freeskier, Eric Pollard. 6.5%

HELLES: Made from water from Mount Hood, German Pilsner malt from the 140-year-old Weyermann Malt House in Bamberg, Tettnanger hops (one of the four noble varieties), and a time-honored European lager yeast strain, this single malt/single hop allows to taste each world-class ingredient. 4.7%

KRIEKY BONES WILD ALE: This beer came to be when Firestone Walker co-owner David Walker requested a sour cherry ale for his 50th birthday. Make no bones about it, this cherry pie with a little bit o’ funk is delicious with sour Montmorency added to an aged Flanders red-style ale then fermented for a second time. 6.2%

SKIES OF WONDER: THE FUTURE IMPERIAL IPA: You gotta wear shades for this most excellent peach and passionfruit fruited, yet powerfully hoppy IPA, featuring Simcoe, Azacca, and Citra hops. Hurry, as Peaks and Pints New Beers in Stock 6.6.20 might not include this beer much longer. It goes quick! 8.7%

WHAT DAY IS IT? HAZY IPA: We’re sure when it was released, or how we got the Idaho 7, El Dorado, Galaxy and Topaz brewed hazy, but all the stone fruit, tropical, floral, dank layers of hops are in our cooler right now. 6.2%

NO SLEEP TILL BALLARD IPA: This def ale hails from the heart of Ballard blending the old and the new, yo. Pine, lemon and grapefruit come from the Chinook and Centennial, while the Vic Secret sneaks in with notes of pineapple and passionfruit. 6.5%

ISLAND CRUSHER: The popular sour ale is back, this time with all the pineapples and passionfruit. 6%