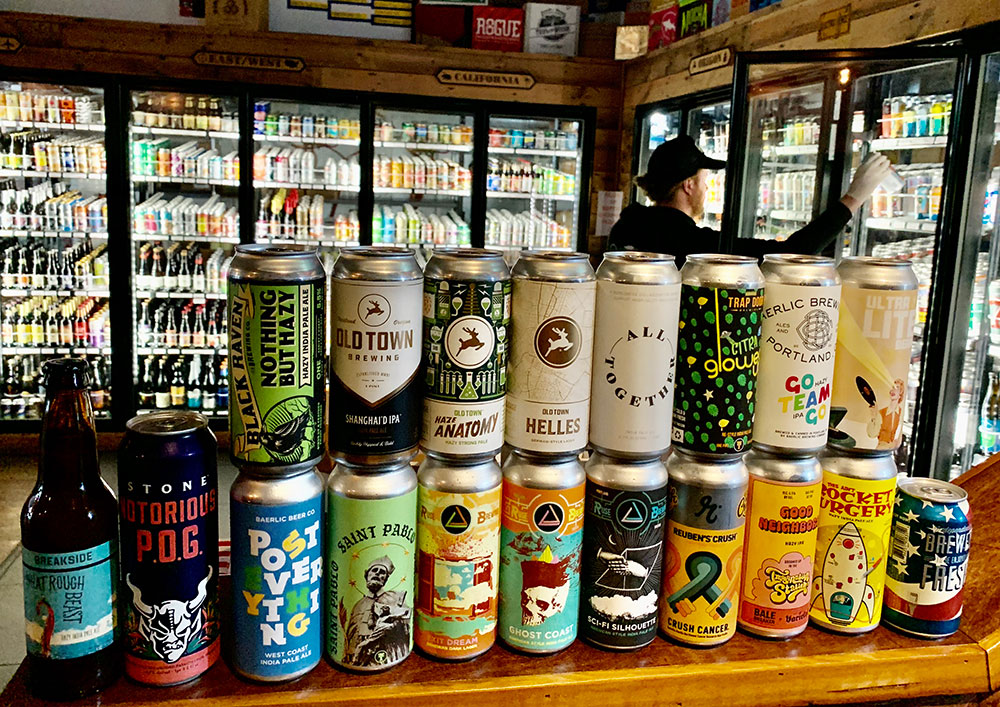 Looking for the perfect gift for the beer lover in your life? Trying to find ways to support your favorite local businesses? Look no further! Peaks & Pints gift cards are available for purchase . If you don’t feel comfortable coming inside, feel free to call us and pay for your gift card over the phone. We can bring it out to your car. Pick up a Peaks & Pints t-shirt or hoodie while you’re here, or maybe make your own 6-pack from the new arrivals below.

POST EVERYTHING IPA: A recent favorite among the Baerlic brew staff, this West Coast IPA is brewed with Centennial, Strata, and Comet hops for expected pine notes with subtle citrus, and bitterness. 7.2%

NOTHING BUT HAZY PALE ALE: A hazy pale that begins with 2-row and Pale Pilsner malts, with wheat, lactose, and oats added to start the hazy journey. Imperial Yeast lab’s juicy strain helps add even more haze to the haze. Expect juicy and tropical aromas with just a slight hop bitterness and dry finish. 5.5%

ALL TOGETHER IPA: Narrows Brewing joined the worldwide, open-source recipe collaboration that originated at Other Half Brewing in Brooklyn, New York. The Tacoma brewery will donate a portion of this beer’s profits to support local restaurant Crisp Greens and their effort to feed frontline Tacoma workers. The oats in this hazy IPA temper the hop punch of Mosaic, Citra, Simcoe, plus the Cascade dry hopping. 6.5%

HAZE ANATOMY: A hazy strong pale brewed with huge notes of citrus and tropical fruit on the nose, followed by flavors of ripe mango, zesty lime, and lychee. The back end delivers a slight, but welcomed floral bite accompanied by a fluffy, pillowy finish. 5.8%

SHANGHAI’D IPA: English-style IPA brewed with 2-row and honey, plus Nugget, Cascade, Liberty, Columbia and Crystal hops, for an aggressive, yet pleasant hop profile of spice and citrus that has earned a gold and silver at GABF, gold at the World Beer Cup and gold at the North American Beer Awards. 6.5%

CRUSH CANCER HAZY IPA: A portion of the proceeds from Reuben’s Brews’ latest Crush Series release, Crush Cancer Hazy IPA, will be donated to Pacific Northwest cancer research non-profits. Made with Citra, Mosaic, and Azacca hops, this hazy IPA is totally crushable, totally hazy, and totally worth it. 6%

GHOST COAST: Modeled after one of Ruse Brewing’s only flagship beers, Phantom Shore, the Portland brewery used the same base beer but upped the malt and doubled the Citra for added citrus to the pine and bitterness. 7.2%

SCI-FI SILOUETTE: Let your senses enjoy crazy notes of ripe pineapple and sticky cantaloupe courtesy of an epic dry hop of Vic Secret, Topaz and Citra in this hazy IPA. 7%

NOTORIOUS P.O.G. BERLINER WEISSE: If you’ve never been to Hawaii, you might not know the amazing flavor combination that is POG – passionfruit, orange, and guava juice. This beer, inspired by actor Jonah Hill, who grew up in the Aloha State, has all the flavors, but the orange dominates for a refreshingly tart and tropical joy ride. 5.5%

ENJOY BY 7.4.20: You have until July 4 to enjoy the freshness of this Stone Brewing double IPA. This year, Stone skipped the filtering step, which changed the nose and made this beer a bit more fruit-forward and hazy, yet kept the hop bitterness of versions past. 9.4%

CITRA GLOWED UP: Trap Door grabbed their Glowed Up hazy IPA and double dry hopped it with more than 5 pounds per barrel of Citra for aromas of tropical mango, lemonade, and bright citrus. 6.8%