Peaks and Pints Pilot Program: Beer Dinner On The Fly

Let’s face it. The thought: “Next week, I’m NOT gonna get drunk during the self-quarantine week and eat an entire bag of sour cream and onion Lays leading to a depression that will lead to ice cream. I’ll save money and lose weight. It’ll be great!” is a bit too ambitious. Why don’t you compromise with reality, and combine food and beer experience. Yes, beer is a beverage, as the majority of its composition is water; however, given that it’s also made with cereal grains, hops and yeast, all of this combined goodness is oftentimes a meal in itself. Ever have a rich, luscious beer that just about fills you up on its own? You know what we’re talking about. Peaks and Pints presents a four-course, to-go beer flight that we call Peaks and Pints Pilot Program: Beer Dinner On The Fly. Watch the pounds fall off!

Peaks and Pints Pilot Program: Beer Dinner On The Fly 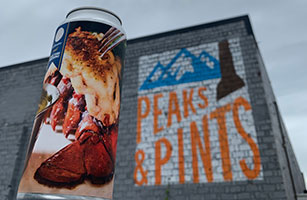 APPETIZER: Let’s begin our four-course dinner with shrimp and lobster ceviche marinated in lemon juice and sea salt: Stillwater Artisanal Surf imperial gose. Brewed with Evil Twin Brewing at Twelve Percent Beer Project in North Haven, Connecticut, this beer either will make you overjoyed or sad by the fact that the shrimp and lobster is not subtle. We taste mildly sweet, briny, muddy fish flavor on the nose and on the tongue, plus lemony sour. 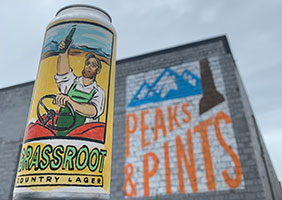 SALAD: Beer is made with hops. Hops are plants. Therefore, by the transitive property, beer is salad, especially Trap Door Brewing’s Grassroot. Brewed with Dwinell Country Ales, this “country lager,” or saison/lager hybrid is crisp, rustic and easy, like a salad. After an initial cool fermentation with Belgian saison yeast, the Trap and Dwindle crew chilled the beer down, pitched Lager yeast, and then cold-conditioned it for nearly 2 months. When we say it’s a crispy, grassy, floral, alfalfa-like ale we say that in the most endearing way. Just hold the 1000 Island dressing. 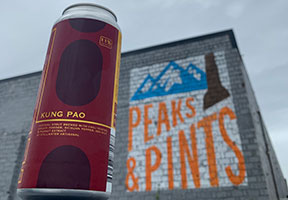 The name of the 19th century Chinese official Ding Baozhen may be unfamiliar, but almost everyone has heard of his favorite dish: kung pao chicken. Kung Pao chicken, also transcribed as gong bao or kung po, is a spicy, stir-fried Chinese dish made with cubes of chicken, peanuts, vegetables, and chili peppers. The classic dish in Sichuan cuisine originated in the Sichuan Province of southwestern China and includes Sichuan peppercorns. Stillwater Artisanal‘s Kung Pao imperial stout isn’t brewed with chicken, but the other ingredients represent: chili powder, ginger powder, sichuan pepper powder, sea salt and peanut extract with no chopping or stir-frying. 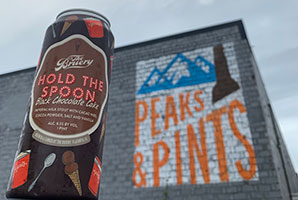 DESSERT: Inspired by Jeni’s popular ice cream flavor, Blackout Chocolate Cake, The Bruery’s Hold The Spoon Black Chocolate Cake is an imperial milk stout “treated with mounds of cacao nibs, pure vanilla, and a dash of salt for balance,” according to Bruery hype. This stout is mouth-filling and complex, with notes of rich cocoa, chocolate cake, bittersweet fudge, and semi-sweet chocolate chips.