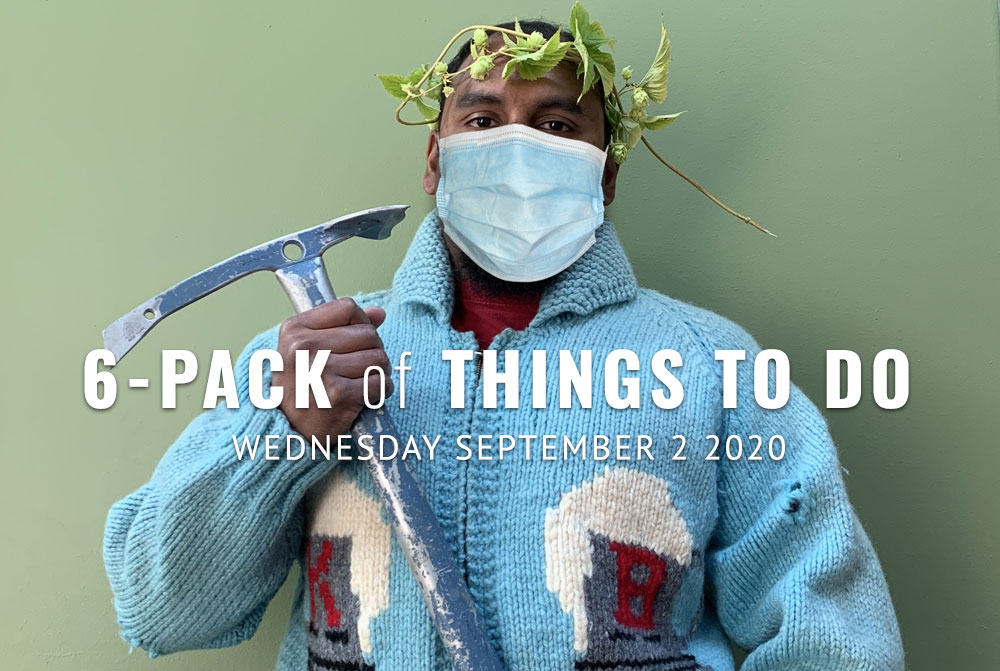 We love Pierce County. If you sometimes don’t, or if you’re one of those daisies who can’t quite commit to even being a Piercehead despite having lived here for more than one year, or if you’re new and need to understand the ethos and pathos of our way of life in a manner that will help you appreciate this place, Peaks & Pints has taken it upon ourselves to recommend a 6-pack of Things To Do in Pierce County Monday through Saturday. Cheers!

BEHIND FRESH HOPTOBERFEST: Polish your clogs, tighten your lederhosen, strap on your mask, and get ready to join the city of Tacoma six feet apart for Peaks and Pints: Behind Fresh Oktoberfest, a 30-day celebration of fresh hop and Oktoberfest beers on tap and in the cooler for fresh hometoberfests. Das right! The pandemic changed our fourth annual mesh-up of fresh hop beers and Oktoberfest biers — from a giant hall party to a crowler-and-can lederhomestead. 11 a.m. to 8 p.m., through Sept. 30, Peaks and Pints, 3816. N. 26th St., Basecamp Proctor, Tacoma

BEER FLIGHT: The yins to Cascade’s yang, Centennial hops are often used in parallel with the famed citrusy varietal. Centennial hops are sometimes referred to as “Super Cascade” due to their higher bittering properties. They were first bred in 1974 as a cross between many different strains including Brewers Gold, Fuggle, East Kent Golding and Bavarian hops. The name comes from the Washington state Centennial Celebration, which occurred in 1989, just before the public release of Centennial hops in 1990. Though not as aromatic as their smaller, older brothers, their excellent blend of floral and bittering characteristics make them well suited to extra-hoppy styles. Centennial hops are a centerpiece of today’s to-go beer flight that we call Peaks and Pints Pilot Program: Centennial On The Fly. Be sure to grab some of our Centennial hops to float on these Centennial-brewed beers at home. 11 a.m. to 8 p.m., Peaks and Pints, 3816. N. 26th St., Basecamp Proctor, Tacoma

SPACEWORKS TACOMA: Spaceworks Tacoma has put Tacoma’s art scene in the major league by filling empty storefronts with the edgiest and most provocative art to make its home in T-town since Scott Fife’s 12-foot-tall cardboard puppy came to the Tacoma Art Museum. It has revitalized the Woolworth window installations and made walking around downtown a visual treat. In response to boarded-up businesses in Tacoma during COVID-19, Spaceworks has partnered with local organizations and businesses to create a rapid mural program. Visit spaceworkstacoma.com for locations of “streetside artscapes” and “rapid murals.” Photo courtesy of Tacoma artist Curtis Ashby

STINKY FEET: After walking downtown Tacoma checking out all the Spaceworks exhibits, you might have stinky feet. Stop worrying about those stinky feet. Just read the testimonials: “After using numerous foot powders and sprays, I found Body Mint to be the only product that gives me the confidence to remove my shoes at friends’ homes,” says R.K. of Waterloo, Iowa. A dietary supplement made of a derivative of the chlorophyll found in green plants, Body Mint works from the inside out to neutralize bad breath, stinky feet and all other body odors. And apparently there are no known side effects except for, yuck, dark-green poo. To order, visit www.bodymint.com. (You try to come up with six events a day during COVID-19!)

HOUSE MUSIC: When people think of hotspots for house music and its followers, a few cities come to mind. London. New York. San Francisco. Las Vegas. But Tacoma? On the surface, Tacoma seems an unlikely choice for a burgeoning house music scene, especially during these times. There was hope when we saw Donald Glaude, DJ dAb, Chris Savenetti, Jason Diamond, Lulu Spice, DJ J-Fresh, DJ Bilori, Mr. Clean and DJ Broam spin regularly back in the day. Of course, underground music isn’t something to be seen. But rather, heard. And felt. The pulse of electronica is alive and well in the city. Thanks in part to Thomas Conway, aka DJ Shaggy. Although he’d rather be spinning house at The Mix tonight; instead he presents Gritty Alphabet online at twitch.tv/tcoema. Grab a Fremont Brewing Disco Wolf IIPA from the Peaks & Pints cooler and dance tonight. 6-9 p.m., Gritty Alphabet, twitch.tv/tcoema

MOVIE: Seeking refuge in London from an ambiguous foreign conflict, an ex-soldier (played by Alec Secăreanu of God’s Own Country) finds room and board as a repairman in the decrepit estate of a mysterious young woman and her dying mother, who stays locked in a room in the attic and may or may not be possessed by an evil spirit. Romola Garai (Atonement) classifies her directorial debut as “feminist horror.” Check out Amulet in The Grand Cinema’s Virtual Screening Room with a Great Divide Pumpkin Spice Yeti from Peaks & Pints cooler. $12 movie