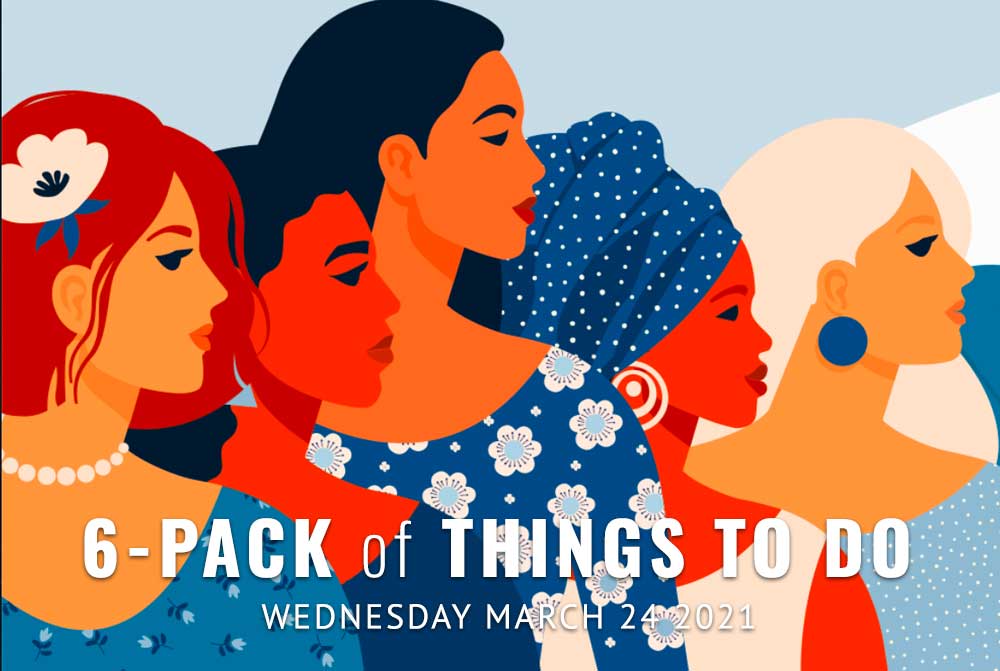 As we move into spring, it’s a time of new beginnings (especially as pandemic restrictions loosen). But it’s also a time to look back and celebrate past accomplishments while considering future changes. Today you can ponder everything from local women entrepreneurs battling the pandemic to UPA students pivoting with their violins, from arts expressing themselves during COVID to PLU’s men’s soccer team winning an unofficial title, while also being entertained by comedians and a quintet of comfort beers. Welcome to 6-Pack of Things To Do: Wednesday, March 24 2021.

BEER FLIGHT: Peaks & Pints ponders changing the name of our upcoming Tournament of Beer: NW Double IPAs to Tournament of Beer: NW Double Trouble. As you may remember, we held last year’s Tournament of Beer: West Coast Flagships during a very COVID April 2020. The shutdown was announced on the last day of Pappi Swarner’s pre-Tournament research tour along the West Coast with his last photo snapped at an empty Iron Horse Brewery, the day before the shutdown. This year, we skipped the pre-Tournament brewery visits for obvious reasons. Instead, we’re pairing the 64 nominated Northwest double IPAs with trails located near the beer’s brewery to ensure less human contact and well as some much-needed exercise. That is, until early Tuesday morning. … With a good portion of Washington state double IPAs paired with Washington trails, Pappi headed to Oregon Monday with several boxes full of nominated double IPAs. After he logged in four hikes, he hit Portland for a box of Voodoo Doughnuts, to press his face against the shuttered Bailey Taproom’s window, and to enjoy an available Pliny The Elder while gazing at the Willamette River from his hotel room. The next morning, he discovered ruffians smashed his car’s window and grabbed most of the Tournament beer, among other items. They also took his Nalgene bottle full of water, obviously to stay hydrated after drinking 50 or so double IPAs. With a two-day window repair time and almost all the nominated double IPAs brewed in Oregon gone, Pappi drove back to Peaks depressed, and rather cold. The Tournament tour was over. The Peaks staff talked crabby Pappi out of shutting down the tournament, then sent him home with five comforting beers (not double IPAs) to forget his troubles for the night. Those five beers are today’s to-go flight — Peaks and Pints Pilot Program: Comfort On The Fly. Keep an eye on Peaks’ Instagram for a few remaining hikes and hops stories not filed yet. Visit tournamentofbeer.com to vote daily beginning April 2. 11 a.m. to 9 p.m., 3816 N. 26th St., Basecamp Proctor, Tacoma

ART: Around the world, artists turned to their creations to navigate days, weeks, or months of lockdown. Many turned to new mediums, unable to access traditional studios or materials. Recognizing this reality, the Pacific Gallery Artists put out a call to their membership for art made during pandemic. Since Pacific Gallery Artists has been promoting art in the Pacific Northwest since 1946 welcoming all levels of practitioners of the fine arts, the response was overwhelming. The Tacoma Public Library’s virtual Handforth Gallery hosts PGA’s “Covid Creations” through April 30.

SPORTS: The Pacific Lutheran University men’s soccer team clinched the unofficial Northwest Conference State Championship Sunday, March 21 as it defeated the Blues of Whitman College for the second consecutive day at East Field.  The Lutes won 3-1 March 20, before the 2-1 victory the next day. With the 2021 spring schedule limiting the men’s soccer program to just opponents from the state of Washington, the Lutes have run their record to 8-2 after their seventh straight win Sunday. You can watch virtually as PLU closes out their home schedule when they host University of Puget Sound tonight. 6:30 p.m. kickoff, PLU Stretch Soccer Streaming, free, photo courtesy of Ally Downey

COMEDY OPEN MIC: If you’re serious about doing comedy, tonight’s open mic at the Tacoma Comedy Club is the venue. For starters, it’s a bona fide comedy club, with stage, lighting and seating set up specifically for the art form. Yet the most crucial element is the human one. There’s much to learn from the wide variety of amateurs who hop onstage and bomb; there’s even more to learn from the seasoned veterans who stop by to work through new material. Be sure to bring your A-game. Note: Sign up at 7 p.m. 7:30 p.m., 933 Market St., Tacoma, no cover