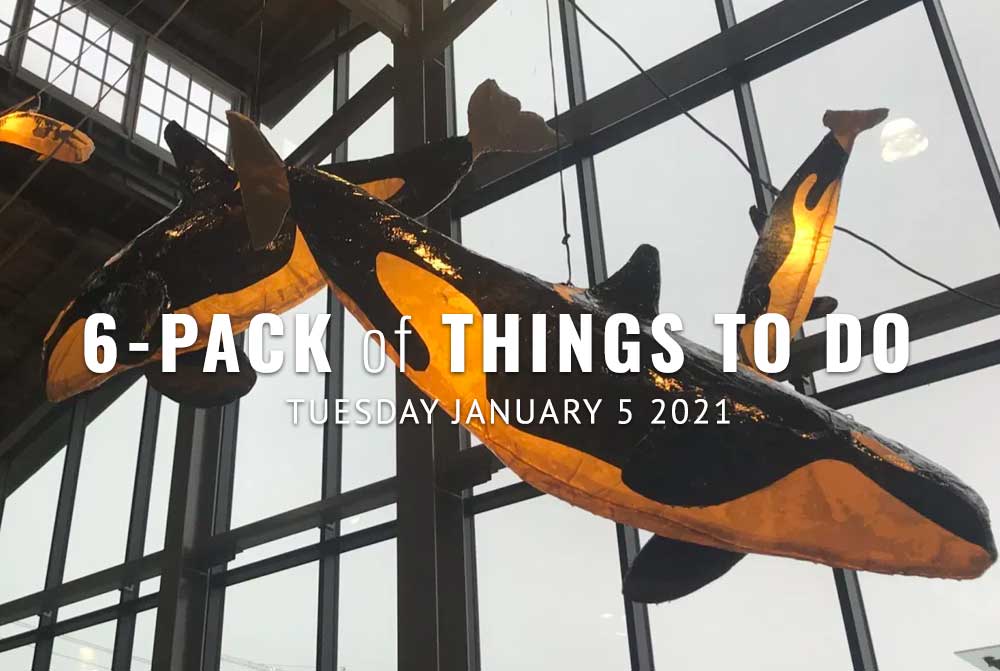 Resolve all you like. Lose 9 pounds, do more palates, get more sleep, don’t spit on the sidewalk, read 188 books in one year like honorary bartender Erika, buy a yak farm in Tasmania, be nicer to shrubbery. Absolutely. But, start slowly. Maybe do only one event in today’s 6-Pack of Things To Do and don’t spit on the sidewalk. Or, buy today’s beer flight and read a paragraph. Or, cheer a Tacoma Runner on as she or he runs by then read about yaks. Cheers!

TACOMA LIGHT TRAIL: More than 30 artists, arts organizations, businesses and downtown spaces have joined the Tacoma Light Trail — a walking or driving trail around Tacoma’s downtown to see light art. The art — which ranges from projection mapping to video, illuminated sculpture and sheer blasts of light — will be visible in more than 20 locations. An accompanying Sound Trail will pair local music, poetry or sound with each light location on the Echoes mobile app. Be sure to check out the whale lanterns by Kristian Brevik in the front window of the Foss Waterway Seaport with Native American flute player Paul Chiyokten Wagner (Saanich) playing a haunting, flowing ode to whales and all non-human people who live in the Salish Sea. Both light and sound maps, as well as background information, are at TacomaLightTrail.org. 5-9 p.m., though Jan. 24, 2021, free

BEER FLIGHT: There are tales of Peter the Great, the Russian Tsar who traveled to England in 1689 and said to have fallen in love with strong British porter, which is weird since the style didn’t truly exist for another 30-plus years. Peter the Great likely did have some influence on the origination of Russian imperial stouts as his modernization of the Russian economy allowed for the importation of British goods, which included beer. In 1729, Ralph Thrale purchased Anchor Brewery of Southwark, London, and brewed the first Russian imperial stout, exporting the beer to Russia. The stout became significantly more famous, however, after Barclay Perkins & Co. purchased the Anchor Brewery from Thrale’s widow in 1781. The taste of the Russian court and ruler Catherine the Great for the stout was a thing. Barclay Perkins Co. continued manufacturing the beer until 1955, when they merged with the nearby Courage Brewery. After that, production of the “original” stout continued as the classic Courage Imperial Russian Stout until 1993, when it was retired. Today, the Russian imperial stout is known for its rich maltiness and strength. In fact, these stouts can be quite intense, with varying amounts of roast and a range of sweet to bitter flavors. They’re most often characterized by a lingering malty finish that is warm, with port-like qualities. Stop by Peaks & Pints grab today’s to-go beer flight of Russian imperial stouts. 11 a.m. to 8 p.m., 3816 N. 26th St., Basecamp Proctor, Tacoma

FOOD DRIVE: We are FOUR days away from the Hoppy Holiday Food Drive final donation day and just a week out from our online Peaks and Pints party. Gather non-perishable food items then head to 7 Seas Brewing (Tacoma & Gig Harbor), E9 Brewing, Grit City Ciderhouse, Narrows Brewing, Odd Otter Brewing, Sig Brewing, Wingman Brewers, or Wet Coast Brewing to add to their totals, as well as grab beer to-go. The local craft house that gathers to the food — or financial donation toward at www.hoppyholidayfooddrive.com — will receive the Hoppy Holiday Trophy the night of Jan. 11 on Peaks & Pints Facebook Live. Your $1 can provide FIVE meals to a family in need.

LECTURE: Natalie Hammerquist is an herbalist born and raised in the Seattle area. She studied herbalism, plant taxonomy and food science at the Evergreen State College, and then went on to study with renowned herbalist Cascade Anderson Geller in Portland, Oregon. She will walk you through the year she spent foraging for plants for food and medicine in Western Washington in her A Forager’s Year in Washington lecture. You might even get inspired to go on your own foraging journey afterward. 6:30-8:30 p.m., Adiantum School of Plant Medicine Zoom Room, $30 here

TACOMA RUNNERS: Let’s talk Tacoma Runners. What started as seven people running to justify post beers has turned into a giant mass of people running … to justify post beers and to be social. The number of members, the structure, the influence — it’s an incredible success story. The Tacoma-base running group has skipped its weekly Thursday night runs for virtual events, including a January 2021 month-long event to celebrate its anniversary. (Tacoma Runners started on a cold January night in 2010 at the Parkway.) The month-long virtual challenge is too long to explain here, so click here to join the fun.

BOOKS: Join the Tacoma Public Library to discuss Children of the Land, Marcelo Hernandez Castillo’s true story about the immigration experience in the United States. This unforgettable memoir from the prize-winning poet about growing up undocumented in the United States recounts the sorrows and joys of a family torn apart by draconian policies and chronicles one young man’s attempt to build a future in a nation that denies his existence. To receive the link to the online discussion, RSVP at MeetUp.com in the Books on Tap group. 7-8 p.m., Tacoma Reads Meetup