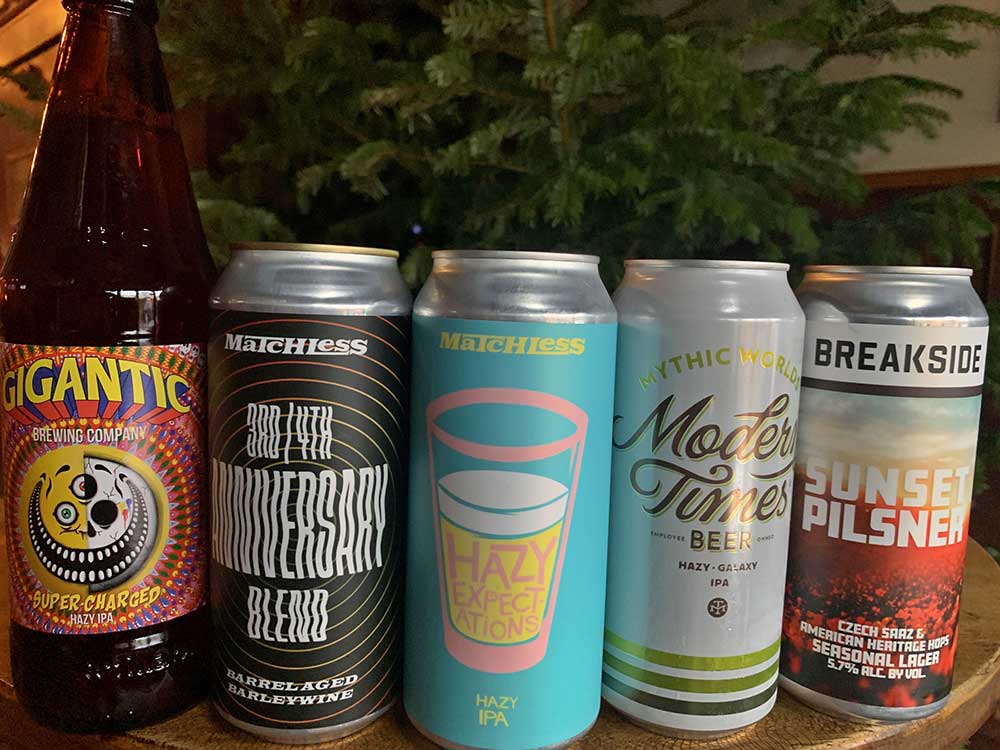 It’s the fifth of January and here are five new beers to the Peaks & Pints cooler. Gotta be a good omen for the new year, right? We have some interesting beers in the Peaks and Pints New Beers In Stock 1.5.21 so let’s jump right into it!

Breakside Brewery Sunset Pilsner is a collaboration with Figueroa Mountain Brewing Company from Buellton, California. “Kevin Ashford and his team at Fig Mountain make some of the best beer in all of California,” says Breakside Sunset Pilsner hype, “and we have long admired the full range of styles that they put out. Above all, though, it’s their love of lagers, and expertise in making them, that really inspires us. For this collaboration, we wanted to put together a full flavored, bright golden lager that suited the climate of the California coast. Imagine the beer you’d want to drink if Oktoberfest were held in Big Sur rather than Munich.” They combined the light body, dry finish, and bitterness of a pilsner with the malt flavors of a modern German festbier, 5.6%

Gigantic Brewing Super-Charged Hazy IPA hot rod is hopped up with excessive amounts of Citra, Mosaic, Simcoe, and Crystal and brewed under higher pressure for all the tropical and pine notes with a long finish, 7.5%

Matchless Brewing Hazy Expectations double dry-hopped hazy IPA is back with all of the Simcoe, Centennial and Amarillo hops in the brew, dry-hopped and then, you guessed it, dry-hopped again for a citrusy aroma of orange and pineapple and a tropical storm of passionfruit and mango on the palate, 6.7%

Modern Times Beer Mythic Worlds is stuffed with gobs of Galaxy, Motueka, Mosaic, and Sultana hops for notes of peach, passionfruit, and tropical radness over a backbone of ripe citrus, 7.5%