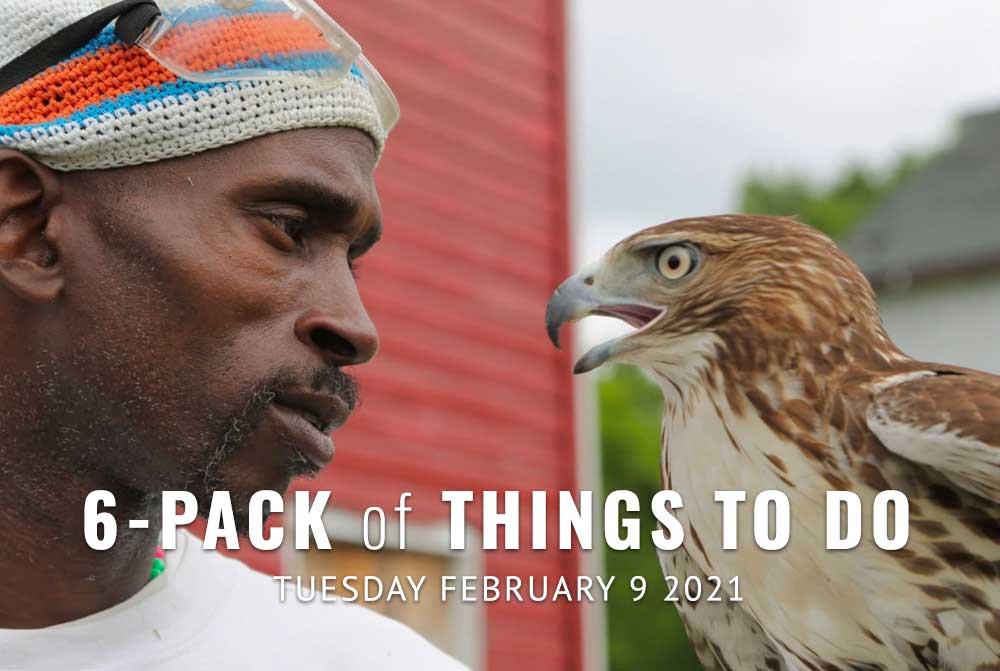 Old or new, it’s important that we passionately support our present to ensure a future. Today’s 6-Pack of Things To Do offers suggestions. Cheers!

FILM FESTIVAL: From Feb. 26 to March 7, Destiny City Film Festival will showcase 39 independent films from around the world. Now in its eighth year, the 10-day virtual experience is much more than just video on demand — “this is your chance to escape, to dream, and to experience another life that you’d always wanted or been curious about,” states DCFF hype. “With 18-plus hours of films and three free special events, this year’s DCFF is going to show you the human experience, then transcend you to another world.” Click here to see the full lineup of films. Photo above is from one of DCFF’s feature films, The Falconer.

BEER FLIGHTS: The five Shapira brothers didn’t know anything about bourbon whiskey, and certainly didn’t have any, when they founded Heaven Hill in 1934. Through a leap of faith, they wrote a check as a war was looming and opened shortly after Prohibition ended in Bardstown, Kentucky. Nevertheless, Heaven Hill made it through trying times and has remained in the hands of the family that started it since. Today, it’s America’s largest family-owned and operated distilled spirits producer and marketer. Their brands have grown beyond the company’s traditional roots as a bourbon distiller to become the country’s sixth largest overall distilled spirits producer and marketer with a portfolio of well-known, innovative and relevant products, and barrels brewers love to age their beer in. Today, Peaks & Pints presents a to-go flight of beers aged in Heaven Hill barrels — a flight we call Peaks and Pints Pilot Program: Heaven Hill On The Fly. 11 a.m. to 9 p.m., 3816 N. 26th St., Basecamp Proctor, Tacoma

GLASS SALE: Are you looking for stunning and unique glass art locally made by talented youths for your Valentine? Hilltop Artists staff, students, and alumni have been diligently working to create and curate works of art — jewelry pieces, artistic sculptures, unique cups, and vases — to sell during their February Sale. The sale of these treasures will help to continue their mission to use glass arts as a means to provide better futures to the lives of youth from diverse economic and cultural backgrounds. Through Feb. 12, Hilltop Artists Shop, pick-up at Jason Lee Middle School 10 a.m. to 2 p.m. through Feb. 13

BALLET: Through February 2021, Tacoma City Ballet hosts “Trailblazers of American Ballet: A Tribute To Black Excellence,” an illumination of the seven Palladian windows in their balcony housed in the Merlino Art Center for all to see outside. This exhibit pays tribute to the pioneers of Black Ballet in America, such as Katherine Dunham (1909-2006) and Janet Collins (1917-2003). Dunham was a dancer, choreographer, creator of the Dunham Technique, author, educator, anthropologist, social activist, and had one of the most successful dance careers in African-American and European theater of the 20th century. Collins was a ballet dancer, choreographer, and teacher with performances on Broadway, in films, and appeared frequently on television. 5:30-9:45 p.m., through Feb. 28, 508 6th Ave, Tacoma, free

THINK AND DRINK: Pronouns? She/He/They? Xe? Indigiqueer? What do these mean to you? Why do they matter? While some narrative from Western feminism is catching up to everyday identity awareness, there is much more to be learned. Specifically, Indigenous gender constructs, including Indigenous Feminism, offer meaningful holistic frameworks of identity as pathways to healing. Hear how these Indigenous gender theories are informing important work including addressing climate change and emerging issues around missing, murdered, Indigenous, womxn, and girls during tonight’s University of Washington-Tacoma’s Think and Drink with Charlene Aqpik Apok of the University of Alaska Fairbanks, who is the executive director of Data for Indigenous Justice, and director of Gender Justice & Healing, Native Movement. You’ll need something to drink: Little Beast Maiden West IPA awaits in the Peaks & Pints cooler. 6:30-7:30 p.m., Think and Drink Zoom, free