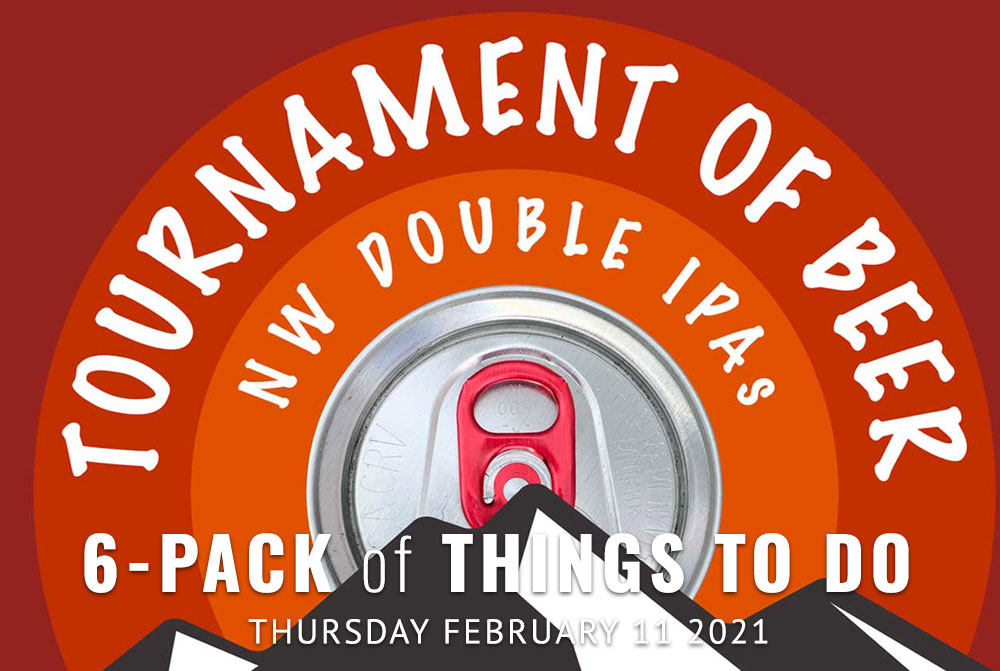 Rise and shine and don’t forget your booties cause it’s coooold out there today! Here’s today’s 6-Pack of Things To Do. Cheers!

BEER CONTEST: In April 2021, Peaks and Pints will host the Tournament of Beer: NW Double IPAs — our fifth beer tournament. Through online voting, Washington and Oregon double IPA drinkers will pick daily winners until the best double IPA in the Northwest is crowned. It’s just like March Madness, only with way more fermentable sugars. First, we need you to help select the 64 Washington and Oregon DIPAs that should be included in the tournament. Click here and vote for your top three Washington and Oregon double IPAs before midnight Sunday, Feb. 21. We’ll randomly select a ballot to win a $25 Peaks and Pints gift card. And look for the first round of Tournament of Beer: NW Double IPAs voting April 2 at tournamentofbeer.com.

BEER FLIGHT: Here are a few things we know about hoppy beers: American drinkers flip out over them, which means breweries are going to keep brewing them, which means we’re going to see continued releases of variations such as sour versions. Brewers are marrying two disparate flavors of hoppy and sour by subduing those major traits, but playing up the fruity qualities each share to create something unique. They can make hoppy beer brighter, complex, and tantalizingly unique and refreshing. These brewers know bitterness is often going to be more prominently “on display” due to the clean playing field, but they’re OK with it. Peaks & Pints is OK with it, too. Therefore, we’re suggesting a to-go of hoppy sours — a flight we call Peaks and Pints Pilot Program: Sour IPAs On The Fly. 11 a.m. to 9 p.m., 3816 N. 26th St., Basecamp Proctor, Tacoma

CREATIVE WRITING: Author Katherine E. Standefer’s new book, Lightning Flowers: My Journey to Uncover the Cost of Saving A Life, won the Los Angeles Times Book Prize, and now she appears in conversation with Pacific Lutheran University Associate Professor of English Wendy Call as part of her The Daily Writer series, a 15-day, 15 author interview series, which began Jan. 20, as an introduction to creative writing class. The Santa Fe, New Mexico, author’s writing appeared in The Best American Essays 2016 and was named “notable” in BAE 2017, 2019, and 2020. Come to ask questions or just to listen and learn about writing poetry, fiction, creative nonfiction, plays, and other literary forms. 4-5 p.m., PLU Zoom Room, free but must register here

MUSIC: The real cost of the COVID-19 impact is being felt by all businesses, but especially those being forced to cease operations. Live music venues have given the community priceless memories, and connected it with artists it knows and loves. One such local venue, Alma Mater, has shifted its restaurant and bar operation to its massive patio and starting tonight, will bring back music — kind of. Every Thursday in February, Alma Mater will rebroadcast their past shows on screens in The Patio. Tonight’s line-up: Ralph Reign, Smokey Brights (pictured), Gold Sweats, Electronic Disassembly, and BLK WINS: The History of Black History. 5-7 p.m., all ages, Alma Mater, 13 22 S. Fawcett, Tacoma, no cover

LECTURE: In 1800, the birth rate in the United States was the highest in the world, with the average women bearing eight children. But by the end of the 19th century, women were bearing, on average, only three. Fort Nisqually Living History Museum’s Fort at Home program will discuss 19th century birth control, including types, availability, and conventions. Lack of information was a major barrier to using contraception in the mid-19th century. The Fort suggests you pair the lecture with a Maiden’s Blush cocktail. Peaks & Pints suggests you pair it with Stickmen Brewing’s Madame Molly Irish Red Ale from the Peaks & Pints cooler. 7 p.m., Fort at Home Zoom Room, $10-$50, preregistration required

COMEDY: Seattle native actor and comedian Adam Ray has spent the last 20 years in Hollywood performing stand-up comedy and acting. He’s appeared in television shows such as Curb Your Enthusiasm, MADtv and Arrested Development. Movie fans saw him in films such as The Heat with Melissa McCarthy and Second Act with Jennifer Lopez. Tonight, Ray takes the Tacoma Comedy Club stage for a three-day stint at the downtown club. 7:30 p.m., 933 Market St., Tacoma, $15-$28