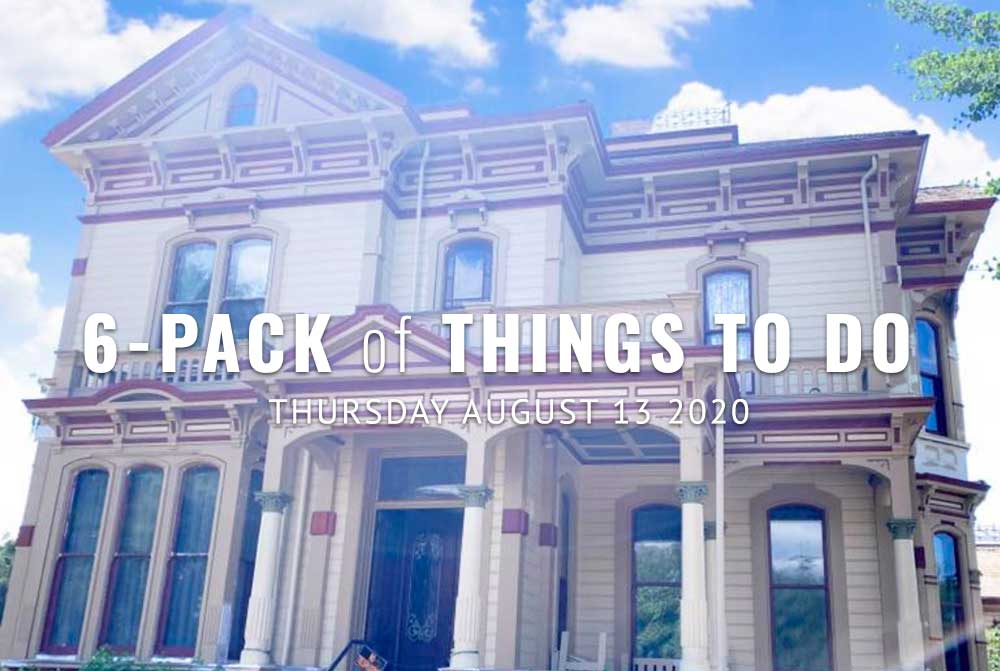 MEEKER MANSION TOUR: Ezra and Eliza Meeker immigrated by ox-drawn wagon to Oregon Territory from the Mid-West in 1852 over what would later be immortalized as the Oregon Trail. They moved to the Puyallup Valley in 1862 with their young children and began subsistence farming. By the early 1880s Meeker was a wealthy hop merchant with a branch in London selling hops on the world market. Meeker Mansion was built in 1890 for Puyallup’s first mayor … wait for it … Ezra Meeker. Pretty Gritty Tours presents a free virtual tour of the Mansion and the story of Ezra and Eliza Meeker. Enjoy Puyallup’s Cockrell Blackberry Cider from the Peaks & Pints cooler while learning about the Mansion. 8 p.m., Pretty Gritty Tours Facebook

BEER FLIGHT: The kings of the beer geeks, in our book, are the brewery sales representatives, or beer reps as they are commonly known. It’s their job to know beer inside and out. They need the knowledge to have intelligent conversations with their boss, the brewery owner, the brewery’s brewmaster, as well as the distributor who, er, distributes their beer, the establishments that sell their beer and the consumers who attended their brewery promotions — the people who matter the most. Today, as part of Peaks & Pints’ Tacoma Beer Week 2020 memoriam — a weeklong celebration of Tacoma beer amidst the canceled annual week-long Tacoma beer celebration — we present a to-go beer flight of out of state beer sold by beer reps who live in Tacoma. Right? So fun! Stop by our craft beer lodge today for Peaks and Pints Pilot Program: Tacoma Beer Denizens On The Fly. 11 a.m. to 8 p.m., Peaks & Pints, 3816 N. 26th St., Basecamp Proctor, Tacoma

NEW RESTAURANT: The core phrase of “old is new” is typically used when referring to the cyclical nature of time. It follows that tracing its precise origins would prove tricky. “Everything Old Is New Again” was penned by Peter Allen for the Bob Fosse 1979 biopic All That Jazz. But it was Stephen King who wrote, “sooner or later, everything old is new again” in his 2005 novel Colorado Kid, which is a lighter version of George Santayana’s “Those who cannot remember the past are condemned to repeat it.” Forget the doom and gloom: Sue Kidd announces a new old Korean fried chicken spot in Lakewood. “Korean fried chicken has ebbed and flowed in Lakewood for years,” writes Kidd. “Old timers (LIKE ME) remember when Chicky Pub operated along with MoMo Hof Cafe and Kko Kko Place, joined by Song Song in recent years. All those are gone now with Kko Kko Place the last Korean fried chicken pub standing. Until now. BB.Q Olive Chicken is expansive and handsome with a sharp decor and a tried-and-true recipe from the international chain that started in 1995 in Korea and landed in America 2014.” Read Kidd’s full story on her Dine Pierce County site. 11 a.m. to 10 p.m., BB.Q Olive Chicken, 8722 South Tacoma Way, Lakewood, photo courtesy of Facebook

MARKET DAY: Tacomans know they have reached West Port when Brady’s Oysters sign appears on the right side of the Highway 105 bridge. Brady Engvall started the business in 1970, selling oysters, clams, crab, fish and more along the pristine shores of Grays Harbor’s South Bay. Today, his children Korry Engvall and Kristi Engvall Ballo continue the tradition, with a booth at the Broadway Farmers Market every Thursday. Stop by Brady’s booth today, watch oysters shucked live, and peruse the fresh fish. Every Thursday the Broadway Farmers Market offers a vibrant marketplace where local farms, small businesses, and organizations connect directly with the community, in a safe manner. 10 a.m. to 3 p.m., 925 Broadway, Tacoma

ASTRONOMY: Every day it’s the same: At any given moment, someone, somewhere is discovering something either quiet or grand, miniscule or momentous, that changes the way we think, the way we hold space, the way we perceive the mind, the world, the galaxy and even reality itself, to the point where we will likely never be the same again. Tonight, the Pierce College Science Dome staff presents a virtual tour of the night sky. The 30-40 minute tour will incorporate a live talk and (weather permitting) real-time telescope observations captured with the Slooh telescope network. Pair the science lesson with Ecliptic Brewing‘s Starburst IPA from the Peaks & Pints cooler.  6 p.m., Pierce College Science Doom Zoom, register here, photo courtesy of NASA

TV TRIVIA: Canadian series Schitt’s Creek pits dumb ex-wealthy folk against small-town rubes with ridiculously funny results: Johnnie and Moira Rose (comedy treasures Eugene Levy and Catherine O’Hara) are forced to live in the dump town of Schitt’s Creek, which they once purchased as a joke. It airs in the on Pop TV before it winds up on Netflix (where you’ll eventually catch it). Trivia AD’s presents a Schitt’s Creek Virtual Trivia night. Pair the online trivia with Canada’s Unibroue La Fin Du Monde. 7:30 p.m., follow @TriviaADDotCom on Instagram to play, photo courtesy of POP TV