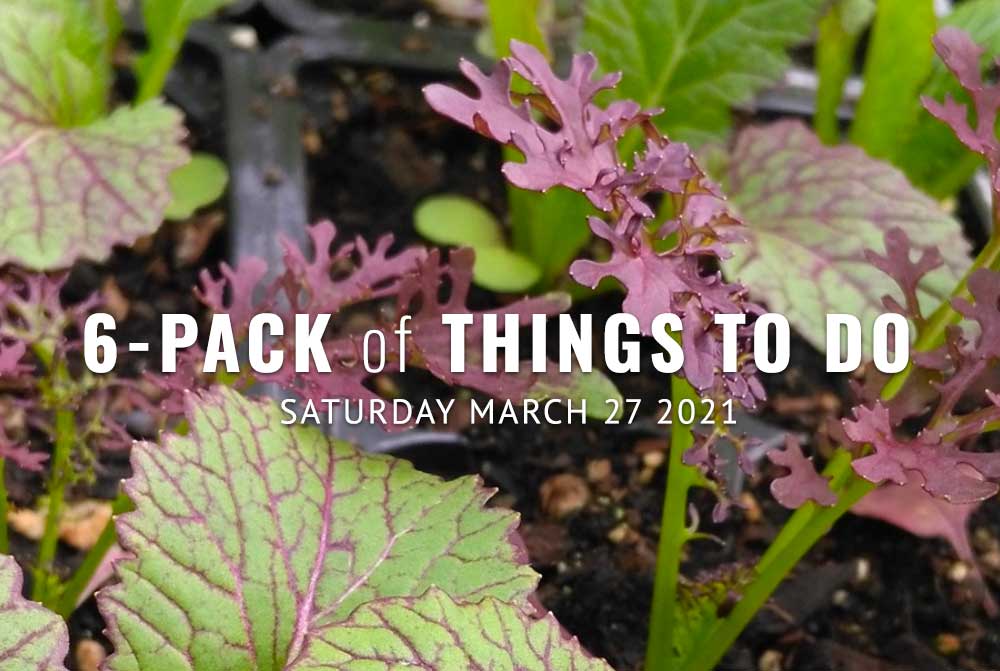 The Proctor Farmers Market is full on beginning today. Plus cabbage pudding! Here’s your Saturday 6-Pack of Things To Do!

MARKET DAY: Spring is here, and warmer weather is on the way, which means it’s time for the Proctor Farmers Market to sweep the street every Saturday morning. The market will reopen every Saturday through Dec. 18 at its 27th Street and Proctor location next to Connect the Brick LEGO store. The Proctor Farmers Market provides locally grown produce, pasture raised meats, wild caught seafood, cheeses, eggs, fruit, flowers, plants, and more. Wild Dreams Farm will be on-site with varieties of vegetable, flower, herb, and grain seeds. Farmer Jim from Cottage Gardens (photo) will have various greens — lettuces, kales, chard, arugula, mustards, broccoli, cauliflower, and peas — all in jumbo 6-packs. A guy named Jim with wild dreams of starting a farm will be there too with his notepad. 9 a.m. to 2 p.m., 27th Street and Proctor, Tacoma’s Historic Proctor District

BEER FLIGHT: There was a time when beer was just called beer? You would order a light beer or a dark beer? Maybe ask for a sweet beer or a bitter beer. Although, during Oktoberfest, you’d order a clear, golden lager. And, before a Seahawks game, you tried something red and acidic at FX McRory’s across from the Kingdome. What the hell was that? Nice work Charles Finkel! Then, in 1977, a man named Michael Jackson (two gloves, not just one) wrote a book called The World Guide to Beer. Combining the work of earlier authors with his own experiences, Jackson pretty much single-handedly created the concept of beer styles, constructing a set of parameters that could be used to categorize the disparate beers of the world. Beer was no longer just beer. In fact, you can thank him for the “Flemish Red” style name. Today, Jackson would have been 78 years old if he didn’t die of Parkinson’s disease on Aug. 30, 2007. In celebration of the beer hunter’s birthday, Peaks & Pints presents a to-go flight of beers Jackson awarded five out of five stars, a flight we call Peaks and Pints Pilot Program: Michael Jackson On The Fly. Jackson awarded five stars is a beer was, “a world classic either because it has outstanding complexity and distinction or because it is the definitive example of its style, and no matter whether everyone is capable of appreciating it; some people probably don’t like first-growth Bordeaux, either.”  11 a.m. to 10 p.m., 3816 N. 26th St., Basecamp Proctor, Tacoma

FORT AT HOME: Apparently warrior king Karl XII was gallivanting around the Ottoman Empire (having fled a failed battle) when developed a taste for the dish “dolma,” which is essentially meat wrapped in grape leaves. Arriving back in Sweden King Karl whipped up the dish for the Swedes. Over time the dish evolved to meat wrapped in cabbage leaves, rather than the more difficult to find grape leaves. The dish eventually received the name cabbage pudding. Fort Nisqually Living History Museum’s Fort from Home Victorian Cooking series presents demonstrations of this historical recipe, with historical food research, and tips on how to adapt cabbage pudding to a modern kitchen. 11 a.m., Virtual Fort Nisqually, $10-$50, photo courtesy of Agnes Eklunds

FILM: In elementary school, in the ’90s, the Scholastic Book Fair was a highly-anticipated event — about as exciting as finding a dime below the Charmin at Safeway. Pristine stacks of stories authored by Judy Blume, R.L. Stine, Maurice Sendak and Roald Dahl lined tables just waiting to be opened and explored. The imaginative world of children’s literature is being kicked up a notch today with the arrival of the Tacoma 90-Second Newbery Film Festival — an event held virtually at the Tacoma Public Library that will feature short films made by a variety of local students who were inspired by Newbery Award-winning books. 2 p.m., Tacoma Public Library Facebook

FILM: Director Evgeny Afineevsky’s Francesco is essentially a valentine to Pope Francis and his progressive policies and the role he has played in spurring the Catholic Church to address major crises, including the abuse scandal within. This feature-length documentary, arriving to The Grand Cinema’s Virtual Screening Room in advance of Easter, Francesco takes viewers through a series of issues and how the Pope has addressed and called attention to them in recent years, from climate change to the related refugee crisis, from Covid-19 to efforts to promote Middle East and acknowledging the Armenian genocide. $12 rental