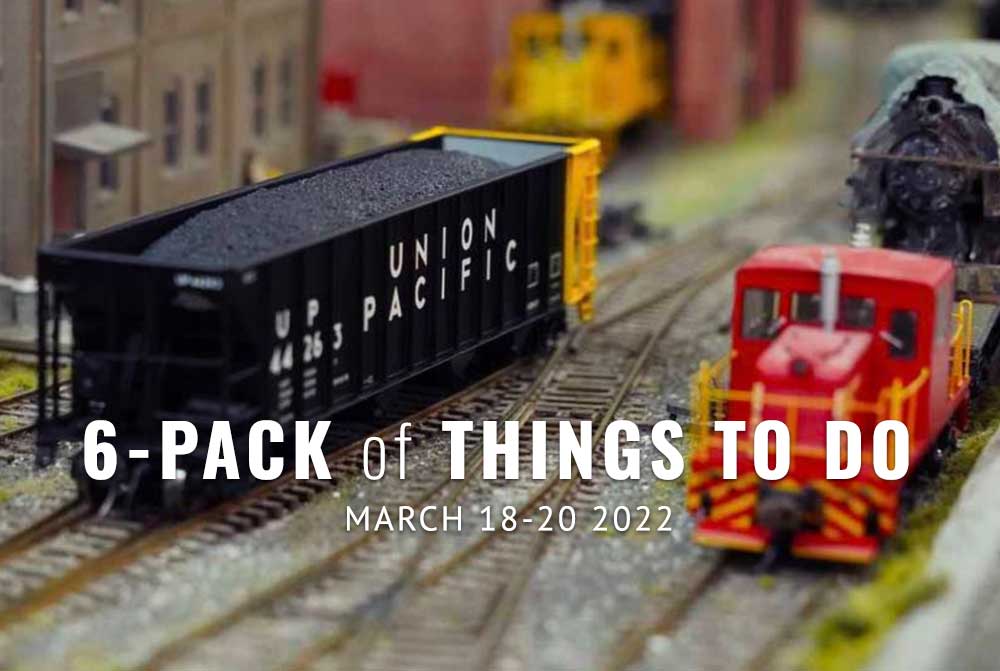 The weather may be gray as we head into this last weekend of winter, but the entertainment calendar is definitely heating up. You can chill out at Model Train Show at the Foss Waterway Seaport, the acoustic show at The Valley, Compartment Number 6 at The Grand Cinema, and more.

MODEL TRAIN SHOW: There are some hobbies better kept to yourself. You know, the ones you do alone in your basement late at night. And then there are some truly cool hobbies, like model railroads. These should be celebrated and dragged out in the open for all to admire. Which is why the Foss Waterway Seaport asked the 4D NTrak N Scale group that represents the National Model Railroad Association in the Pacific NW Region to assemble and operate “Rails to Sails Model Train Show” complete with ramps for loading cars onto a ferry that will travel across the layout and unload the railcars onto another ramp. But remember to look both ways before crossing and keep your pennies to yourself. 10 a.m. to 4 p.m., through March 20, 705 Dock St., between the Northern Pacific Railway’s Half Moon Yard, and the Foss Waterway, Tacoma

BEER FLIGHT: These days, beers with adjuncts such as fruit, marshmallow, and milk sugar have become common. Gone are the times when a pie-inspired beer felt radical. And here, now, is a weird phase in the billion-armed evolution of American beer, where ordering a sour made to taste like a slushie is a year-round staple. Slushie sours — also known as pastry sours or smoothie sours — are the evolution of the fruited kettle soured beers — gose and Berliner weisses — that made a resurgence and grew incredibly popular in the early part of the 2010s. Brewers donning aprons added non-traditional ingredients to these traditional-styles to recreate desserts in liquid form. Today, Peaks & Pints presents a to-go flight of the evolution of smoothie sours (what we have in stock) — a flight we call Peaks and Pints Pilot Program: Smoothie Sour Evolution On The Fly. 11 a.m. to 11 p.m., Friday, March 18, Peaks & Pints, 3816 N. 26th St., Basecamp Proctor, Tacoma

FILM: Strangers on a train, once again. But in this Cannes Grand Prix co-winner from Finland, set in post-Soviet Union Russia sometime during the late 1990s, its two passenger protagonists share the cramped second-class berth in the film title, Compartment Number 6, a new film from Finnish writer and director Juho Kuosmanen. As a train weaves its way up to the arctic circle, the two strangers share a journey that will change their perspective on life.  11:40 a.m., 2:05, 4:30 and 7 p.m. Friday-Sunday, March 18-20, The Grand Cinema, 606 S. Fawcett, Tacoma, photo courtesy of Sony Pictures Classics

COMEDY: For anyone who stepped foot in a movie theater during the late 1990s and most of the 2000s, the Wayans Brothers should be immediately recognizable. Keenen, Damon, Shawn, and Marlon have had comedy careers that span decades, with each taking turns at almost every role in Hollywood, from acting to directing and screenwriting. Marlon, the youngest of the brothers, is probably best known for his constantly high character, Shorty Meeks, in the first two Scary Movie flicks, as well as turns in White Chicks, Littleman, and the A Haunted House movies. Marlon Wayans is still a regular stand-up comedian and will appear at Nate Jackson’s Super Funny Comedy Club. 7 and 9:45 p.m. Friday and Saturday, March 18 and 19, 8402 S. Hosmer St., Tacoma, tickets here

MUSIC: As the saying goes, “Time flies when you’re having fun,” and for Junkyard Jane it’s been a barrel of monkeys for the past 25 years as Billy Stoops and Leanne Trevalyan have been hosts to a non-stop party. Junkyard Jane was formed in 1997 out of stragglers from three different bands with a common vision: to have fun with music. Stoops and Trevalyan break off from the band tonight to perform an acoustic show at The Valley. Trevalyan’s whimsical vocals and the occasional kazoo solo compliment Stoops’ nasty mastery of the Strat coupled with his powerfully rich voice. Jim King will open. 8 p.m. Friday, March 18, The Valley 1206 Puyallup Ave., Tacoma