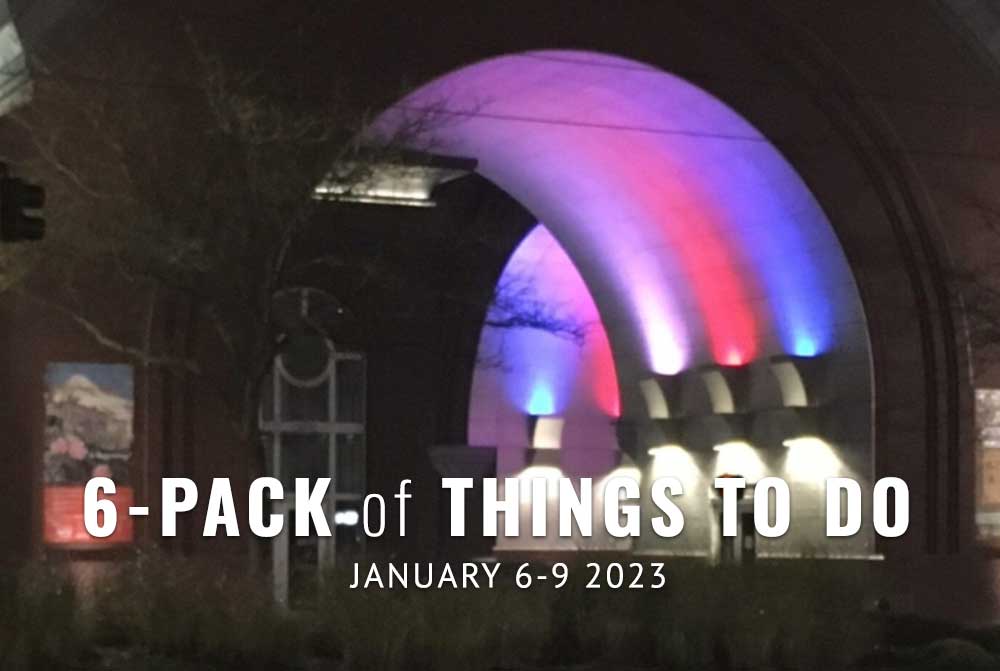 Is this the year? Is this the time you reset your intent and cut a wide swath across Tacoma? Are you ready to disavow your grudges and cleanse your spiritual colon and wave your bitchin’ flame of self around like a Bic lighter at a 1984 Journey concert? Peaks & Pints’ 6-Pack of Things To Do is here to help.

TACOMA LIGHT TRAIL: The Tacoma Light Trail is exactly that: a walking or driving trail around Tacoma’s downtown to see light art. The art – which ranges from projection mapping to video, illuminated sculpture and sheer blasts of light – is visible from the street in more than 50 locations through Jan. 19. An accompanying Sound Trail pairs local music, poetry, or sound with each light location on the Echoes mobile app. Tonight, we suggest you start your walk at the Washington State History Museum to take in the towering front archway in a blast of colored light. Arches have long symbolized passage and progress from one place to another. The Arch of Washington represents the tremendous natural beauty, bounty, and opportunities for diverse communities throughout history that have shared Washington as their home. Click the accompanying “Sound Trail” on the Tacoma Light Trail website to hear Richard Scheuerman give a brief oral history as he tells the story of when his immigrant family arriving in Washington. Then, head next door to the Tacoma Art Museum lower parking lot to watch and hear the Asia Pacific Cultural Center Dance, Tacomarama Brass Band, Tacoma Dance Studio, and a unicyclist from 6-8 p.m. Scan the QR code at each location to learn more about the art and listen to the Sound Trail. Learn more about the free events scheduled throughout the festival and trail on the Tacoma Light Trail website. 5-9 p.m. daily through Jan. 19, downtown Tacoma

BEER FLIGHT: Simcoe was introduced in 2000 by Yakima Chief Ranches as a proprietary hop varietal with strong bitter and aromatic qualities. Little has been released about its parentage, but it has been compared to Cascade. Simcoe isn’t a one-style pony; this variety can do great things in several beer styles, and is often used in conjunction with the Cascade, Centennial, Chinook, and Citra hop varieties. Although not used much as a bittering hop, many craft brewers favor Simcoe for its unique aroma profile composed of piney, woody, and grapefruit citrus notes mixed with slightly dank and spicy notes of onion and garlic. Peaks & Pints certainly enjoys it and deem worthy of a to-go beer flight — along with its companion C-hop friends. Peaks and Pints Pilot Program: Simcoe and the C’s Flight is on. Friday, Jan. 6. 11 a.m. to midnight, Friday, Jan. 6, 3816 N. 26th St., Basecamp Proctor, Tacoma

PODCAST: Whether it was the hotel rodeo party that banned him from the rodeo circuit and a U.S.-Canada border town, or his back injury sustained building fancy things for fancy people, Chris Miller gave it all up to open a less than 1,000-square-foot hot dog and independent beer joint with his family on Tacoma’s Sixth Avenue 15 years ago last summer. It didn’t matter that it was tiny, didn’t have a walk-in cooler, or struggled to find staff and patrons in the early days, Miller, his partner and brother Stu, and their parents, had the vision, drive, and skills to create one of Tacoma’s most popular destinations, The Red Hot, which the Food Channel and Travel Channel concur. Tune-in to Grit & Grain Episode 27 for Miller’s take on Tacoma, The Red Hot, the beer industry, and his staff. To listen to Chris Miller, and previous Grit & Grain episodes, visit gritandgrainpodcast.com, or search your favorite podcast mediums, including Channel 253. Cheers!

FILM: The Blue Mouse in Tacoma’s Proctor District screens Avatar: The Way of Water this weekend. Set more than a decade after the events of the first film, this film begins to tell the story of the Sully family (Jake, Neytiri, and their kids), the trouble that follows them, the lengths they go to keep each other safe, the battles they fight to stay alive, and the tragedies they endure. Shot in enhanced 3D at a high frame rate of 48 frames per second, the result isn’t just an astonishing, crystal-clear picture but perhaps the most immersive moviegoing experience ever. You could get lost in the world of Pandora all day. Or at least for 3 hours and 12 minutes, which is the run time of the movie (plan accordingly). We suggest your pre-func and post-func with a Fort George Brewery Blue Mouse IPA at Peaks & Pints. 7 p.m. Friday, Jan. 6-Monday, Jan. 9, 2:45 p.m. Saturday and Sunday, 2611 N. Proctor St., Tacoma, photo courtesy of Disney

COMEDY: Tacoma Comedy Club presents stand-up comedian Bruce Bruce live Friday through Sunday. Bruce Bruce is a name synonymous with keeping audiences rolling with laughter thanks to his captivating improv skills and larger-than-life comedic style. From his role as host for two seasons of BET’s Comic View to his many appearances on TV and film, Bruce’s steady style of comedy has been showcased across the country, and he has been entertaining audiences young and old, and of all backgrounds, for years. 7:30 and 10:15 p.m. Friday, Jan. 6, 7 and 9:45 p.m. Saturday, Jan. 7, 7 p.m. Sunday, Jan. 8, Tacoma Comedy Club, 933 Market St., Tacoma

MUSIC: The Queen of Soul, Aretha Franklin, passed away at the age of 76 on Aug. 16, 2018, connecting her to another legendary musician who died on the same day, Elvis Presley. “The King,” as he was affectionately called, died on Aug. 16, 1977, after suffering a heart attack. It’s certainly an interesting coincidence, considering how iconic both artists are and how much their careers have impacted the entertainment industry. The Soul Searching Band found its soul by channeling these legendary singers Aretha Franklin and Elvis. This eight-piece Seattle band with a horn section will take you on a journey through the music of the Queen and King. 7 p.m. Saturday, Jan. 7, Spanish Ballroom, McMenamins, 565 Broadway, Tacoma