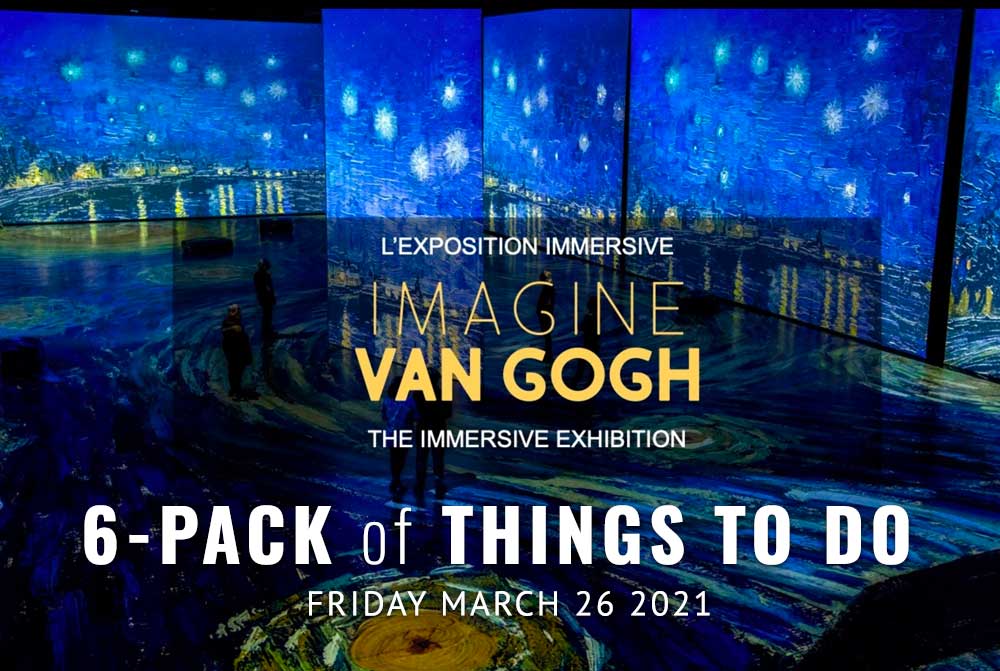 Join Peaks & Pints as we vault headlong like a boss into the 6-Pack of Things To Do: Friday March 26 2021. Cheers!

ART: Tacoma Arts Live alerts us to Imagine Van Gogh the Original Immersive Exhibition in Image Totake© featuring more than 200 of the Dutch artist’s paintings, which is making its debut in the Pacific Northwest this winter at the historic Tacoma Armory. Annabelle Mauger and Julien Baron, renowned for their work at Cathédrale d’Images in Les Baux-de-Provence, France, are the artistic directors behind the creation of this unique exhibit that brings Van Gogh’s canvases to life in a vivid, spectacular way: the audience will truly enter the artist’s world of dreams. The exhibition is a contactless experience spanning over 24,000 square feet with a limited number of guests allowed in attendance on a timed-entry basis. Hand sanitizer will be provided, physical distancing of six feet will be required, and masks will be mandatory upon admission. Register here to gain access to the exclusive presale. Photo courtesy of Facebook

BEER FLIGHT: If you created a Venn diagram representing today’s Peaks & Pints to-go beer flight, you’d have “Beer” in the first circle, “Milkshake” in the second circle, “Lassi” in the third circle, “Smoothie” in the fourth circle, and Peaks and Pints Pilot Program: Soda Fountain On The Fly in the center circle. Over the last 40 years, brewers have experimented with an array of flavors, processes and ingredients. They’ve turned classic styles into comfort foods such as pastry stouts or beer slushies. A growing trend in craft beer is the beer milkshake/smoothie/lassi. These beers are often with so much fruit puree that they look less like beer than something poured at the corner soda fountain. The brewing process varies, but basically wort is allowed to cool in the brew kettle. Then lactobacillus (a bacteria in yogurt, cheese and sauerkraut) is introduced. After a day or so, the mash becomes sour and the brewing process is restarted with enough heat to kill the bacteria. Lactose is added, which lends even more body. This beer is left unfiltered, further adding to its viscous appearance. Then a crap ton of fruit is added before packaging. Today, we offer a couple examples in said flight. Order up! 11 a.m. to 10 p.m., 3816 N. 26th St., Basecamp Proctor, Tacoma

ORGAN AT NOON: No time for midday yoga or meditation? You can still seize hold of some inner peace by logging onto the University of Puget Sound’s Organ at Noon Series: Annual All-Bach Recital for 55 minutes of Bach organ pieces performed by Wyatt Smith. Sometimes joyous, sometimes weighty, and sometimes sounding like glittering mathematics fugue-ing before God, these baroque “meditations” are soothing and thrilling at once, the experience a reminder even for unbelievers that there are things grander than us, that can unite us across time. Noon, streaming live from Kilworth Memorial Chapel, free

THEATER: The cast from Tacoma Little Theatre’s 2016 production of Dracula will reunite to share their experience of putting on this haunting adaptation of the classic novel. “Tacoma Little Theatre’s rendition of Dracula is creepy, funny, horrifying, and hauntingly beautiful,” wrote Weekly Volcano theater critic Alec Clayton. “A highly stylized presentation as directed by Pug Bujeaud with outstanding sets (Blake R. York), lighting (Niclas R. Olson) and costumes (Michele Graves); this production is the epitome of theatricality.” Log on, ask questions or just sit back and hear about their experiences. 7-8 p.m., TLT Castmates Zoom Room, free

NEIGHBORHOOD TOUR: If you were to tour the perimeter of Tacoma’s West End you would run the Five Mile Drive then invade Salmon Beach with a kayak and paddle to Narrows Brewery on 19th 1Street, ditch the kayak and run east to State Route 16, follow it to Sixth Avenue, turn right and make your way to North Orchard. Turn left and run to North 46th Street, then head down to Ruston Way and back to Point Defiance Park. Tonight, Pretty Gritty Tours will virtually cover that route adding tidbits about redlining, topography, logging history and more with the City of Tacoma’s Historic Preservation Office. 8 p.m., Pretty Gritty Tours YouTube, free