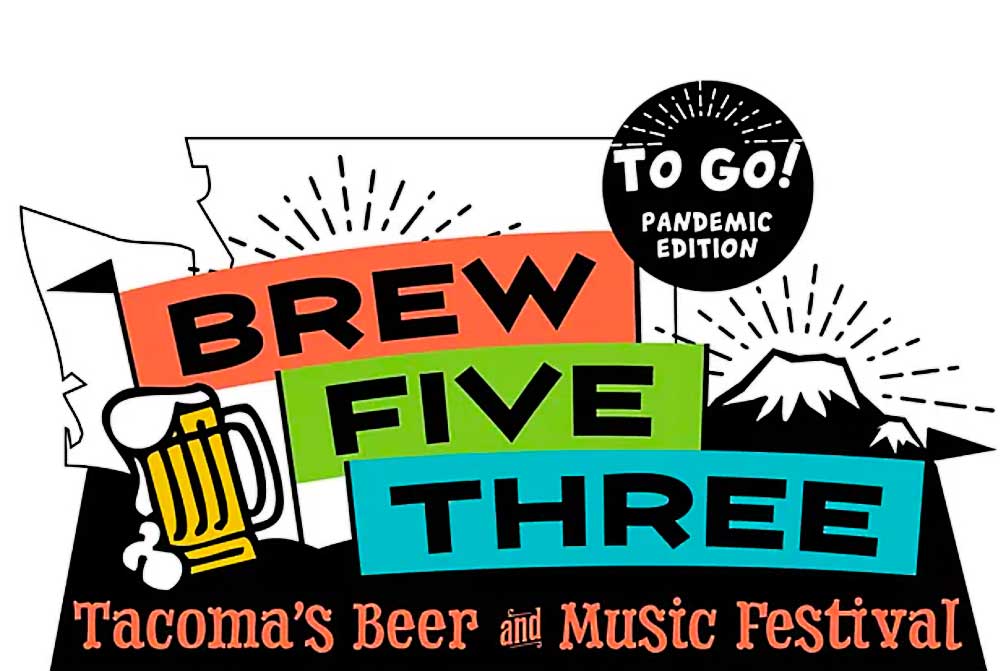 There is still time to join the Tacoma Arts Live Brew Five Three To Go beer and music festival held in February. In the meantime, here is today’s 6-Pack of Things To Do. Cheers!

BEER FESTIVAL: Remember sitting next to the salmon fountain with your branded taster glass, pretzel necklace and the faint whiff of sunscreen in the air. It was 2019; the 2020 Brew Five Three Beer and Music Festival was canceled last year. It’s back this year — but nearly six months earlier and you’ll most likely be sitting at your couch with a bowl of pretzels and the faint whiff of your spouse’s potato chip topped chicken casserole. Tacoma Arts Live presents Brew Five Three To Go, a virtual tasting, to-go pandemic version with three tasting kits. They will host three different Zoom-style virtual tasting events (Feb. 13-14), one for each of the three kits, highlighting what you’re drinking, as well as brewers’ chat and Q&A sessions. Order your kit(s) now. Sales close Thursday, Feb. 4. Pick up date is February 13 noon to 5 p.m. at the LeMay Car Museum.

BEER FLIGHT: Triple IPA: It’s a palate-smashing beast of an ale designed for those times when a hazy IPA simply won’t cut it. yet, the style still isn’t recognized — and debate rages among the pimpliest of beer nerds over whether it’s a style at all. Peaks & Pints believes the triple IPA is a massively hoppy beer of 10 percent ABV with outrageous amounts of dry hops, hop flavor, malt flavor, alcohol and bitterness. The triple IPA may be similar to a double IPA in hop character, but is differentiated from the style by a thick, syrupy body accented by intense hop resins that make it a heavy sipping beer. Great triples harness an artful assortment of hops, and propping them up with a suitable quantity of the proper malts. Still not sold? Here are four examples that recently arrived to our cooler. Stop by and grab the to-go beer flight, Peaks and Pints Pilot Program: Triple IPA On The Fly. 11 a.m. to 8 p.m., 3816 N. 26th  St., Basecamp Proctor, Tacoma

THEATER: The Bare Bones Theatre Collective at the University of Puget Sound produces two student-led theater festivals a year, one of which happens virtually tonight. Lord of the Things: Interactive Student Theatre Festival will stage interactive student plays inspired by Lord of the Rings. The world can be a cruel and vicious place compared to the hell-pits of Mordor. Take time away and watch these talented students, maybe enjoy an Ecliptic Oort Imperial Stout from the Peaks & Pints cooler. 6 p.m., Bare Bones Zoom Room, free, but registration required here

THEATER: The cast from Tacoma Little Theatre’s 2019 production of Hay Fever will reunite to share their experience of putting on this ageless comedy by Noël Coward. “A bit of farce and a bit comedy of manners, Noël Coward’s Hay Fever seems as fresh and saucy on stage at Tacoma Little Theatre as it must have when it premiered almost a hundred years ago — thanks to terrific directing by Rick Hornor and an amazing cast headed by Jane McKittrick as the washed-up actress and matriarch of the eccentric Bliss family,” writes Weekly Volcano theater critic Alec Clayton. “It is doubtful there has ever been a more blissful and whacky theatrical family on stage (pun very much intended).” Log on, ask questions or just sit back and hear about their experiences. 7-8 p.m., TLT Castmates Zoom Room, free

WINE TASTING: Kris Blondin of Amitie Wine Company will host Tom Kelly of Small Vineyards, a small Italian wine importer, and Lilli Blaylock of Prime Wine and Spirits in a virtual discussion and tasting of the beauty and complexity of four unique Italian wines. The Zoom tasting is free of charge, but more fun actually tasting the wines with the experts. Stop by Amitie today to grab all four wines or a tasting kit with three of the wines (the sparkling is not included as pre-bottling will lose the bubbles). Opens at 3 p.m., tasting at 7 p.m., 1130 Broadway, Suite 204, downtown Tacoma, Amitie Zoom Room