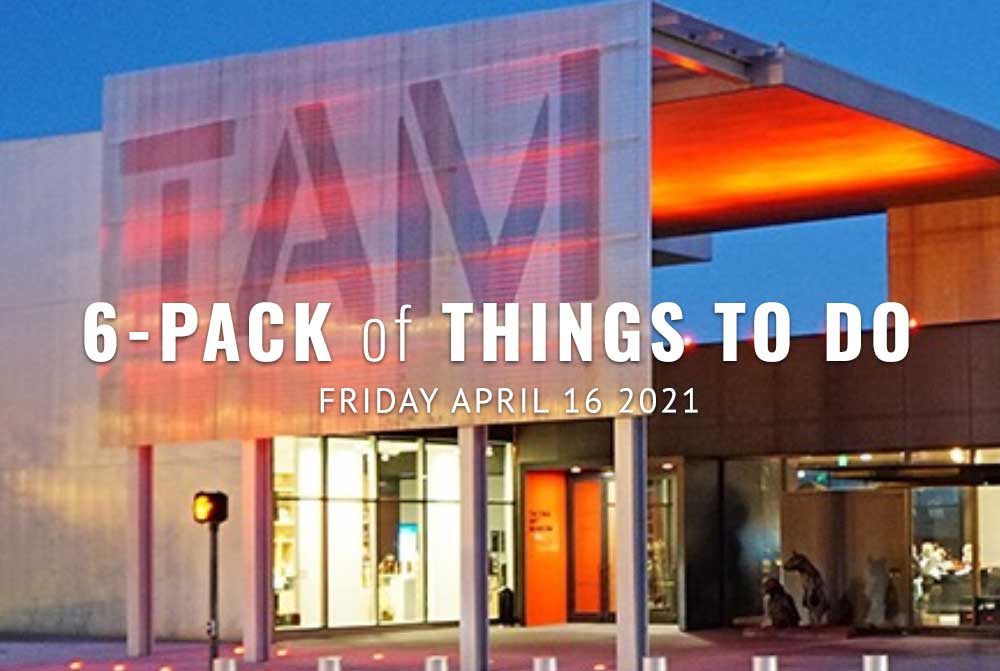 What makes you happy? If you said a swell $1,000 Aeron chair and a shiny new Apple Watch and extra-long saki-infused lunch breaks and free long-distance to Kathmandu when the boss ain’t paying attention, well, you’re absolutely right, but you are also, hopefully, including today’s 6-Pack of Things To Do. Cheers!

ART: Tacoma Art Museum officially reopens to the public today with new exhibitions to showcase in person since debuting online. South Sound Selects: Community Choices from the Collection, which opened virtually in November 2020, broadens the curatorial voice at TAM by highlighting works from the Museum’s collection as chosen by 27 community members. TAM’s newest exhibition, Painting Deconstructed: Selections from the Northwest Collection takes a deep dive into the art of painting by focusing on the core components that come together to create a finished image. They are also excited to feature new selections in the Rebecca and Jack Benaroya Wing as part of Metaphor into Form: Art in the Era of the Pilchuck Glass School, including a new installation in the project space, Glass as Canvas. 10 a.m. to 5 p.m., 1701 Pacific Ave., Tacoma, $15-$18, reserve your space here

BEER FLIGHTS: It was 2007 when Ron and Jackie Walcher opened the brewery down a dirt road near Arlington. Today, Skookum head brewer Hollis Wood and his small team churn out “big bold strong” craft beers in a giant facility with a popular taproom down the street from the Arlington Airport — managed by an angel, a big, bearded lovable man named “Angel.” Skookum Brewery brews beers that are locally sourced, with more than 90 percent of their barley grown and malted in state, on equipment predominately purchased locally including several pieces made in Washington state. Today, Peaks and Pints presents a to-go, five-beer flight of the Arlington brewery’s craft beers that we call Peaks and Pints Pilot Program: Skookum On The Fly. 11 a.m. to 11 p.m., 3816 N. 26th St., Basecamp Proctor, Tacoma

TOURNAMENT OF BEER: The field of 64 Pacific Northwest brewed double IPAs was been voted down to 24 in the mother of all double IPA brackets. You’ve seen the carnage: No. 3 seeds fell, powerhouses butted heads, and hazies are making a run at the prize. Welcome to day three of the Second Round in the Tournament of Beer: NW Double IPAs. Click here for a recap of yesterday’s games and to vote on today’s four games. Cheers!

RETURN OF THE MECK: Musician Jim Meck’s “Pedestrian Serenade” returns to North 29th Street. That’s right! Meck makes music from his porch for all to enjoy. He loves classic rock, but he is very comfortable with jazz standards, classic country, and some current hits. Plan your afternoon walking route to include his block of North 29th between Cedar and Alder in North End Tacoma and enjoy. 5-7 p.m., Meck Facebook, Meck Paypal

COMEDY: Growing up the daughter of an international yo-yo champion and a professional foosball player, 31-year-old Kelsey Cook has plenty to talk about at the Tacoma Comedy Club tonight. Cook moved to Los Angeles from Seattle two years ago and has spent the last year touring 50+ dates with Jim Norton. When Cook isn’t doing stand-up, she’s probably at a local bar, hustling people on the foosball table. 7 and 9:30 p.m., Tacoma Comedy Club, 933 Market St., Tacoma, 20-$28 here.

DANCE: If you’ve never entertained the notion of “getting high on life,” well, you may want to reconsider your stance. Ecstatic Dance Tacoma promises that at their freeform sober two-hour dance party, you’ll move into a meditative state, tapping into parts of yourself that are concealed during the everyday, and blurred during happy hour. Tonight, Sloane Motion will spin progressive house, tech-house and good energy, plus a cozy tea lounge, tarot, and areas for meditation and yoga. Join eclectic electric, soul, house, and bass with a closing sound bath. 8-11 p.m., The Space, 728 Broadway, Tacoma, RSVP only at info.ecstaticdancetacoma@gmail.com.