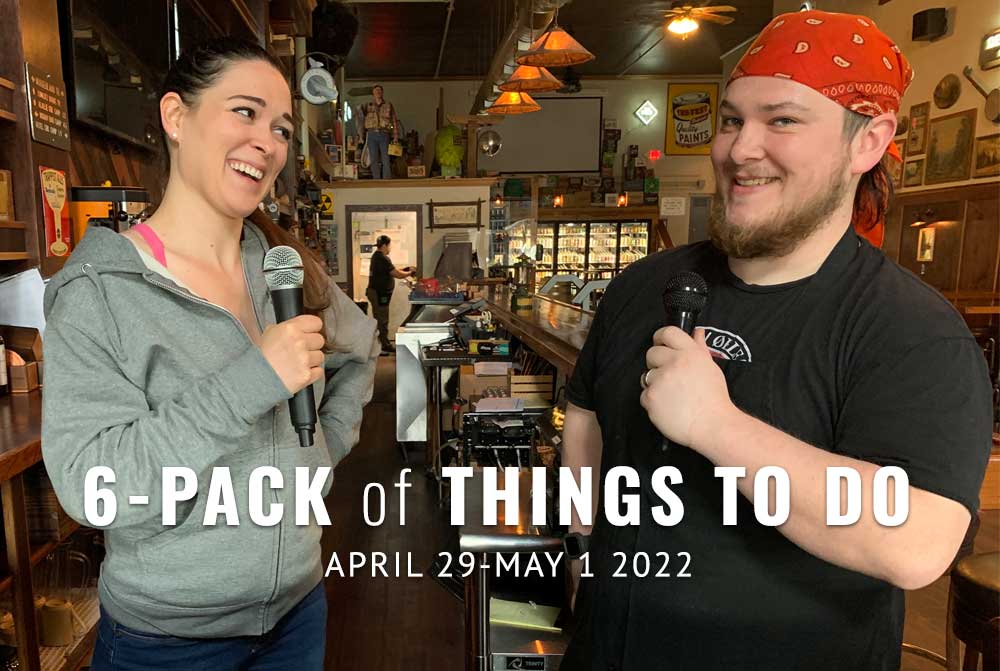 During this last week of April, you can shop at a giant flea market, learn about living fossils, partake in a film discussion and help determine the best lager brewed in the Northwest, among other events in the greater Tacoma area.

TOURNAMENT OF BEER: For three weeks, Peaks and Pints challenged 64 of the Pacific Northwest’s best lagers to go crispy boi-to-crispy boi in a showdown of craft combat. Some fell easily by the wayside, either due to a rogue mash tun cleaner or simply because they faced a superior opponent. Hop by hop, you voted down to the final four today with voting live at peaksandpints.com. Tomorrow, Saturday, April 30, is the Peaks and Pints Tournament of Beer Championship game. Online voting will end at 4 p.m. Saturday. Voting will resume at 5 p.m. live at the Tournament of Beer Party. Ballots will be handed out, which will also serve as raffle tickets for sweet prizes. The live vote will close at 8 p.m., tallied and the Northwest lager champion will be announced at 8:30 p.m. 3816 N. 26th St., Basecamp Proctor, Tacoma

BEER FLIGHT: The Baltic porter is a traditional English style, developed by the British in the 1800s for export to their buddies in the Russian Court. The Baltic porter is an interesting breed, because while it’s a porter in name and flavor, it’s not an ale. All Baltic porters are lagers, meaning they’re brewed with a strain of yeast that ferments for longer times at colder temperatures and contributes a cleaner, crisper flavor to the brew. The Baltic porter is a dark black beer, sometimes with garnet and ruby highlights. It is known for an assertive chocolate malt that imparts sweetness and often hints of toffee, licorice, and roastedness, and it can be quite strong, ranging from 7.6 to 9.3 percent. Today, Peaks & Pints presents a to-go flight of Baltic porters — a flight we call Peaks and Pints Pilot Program: Baltic Porters On The Fly. 11 a.m. to midnight, Friday, April 29, 3816 N. 26th St., Basecamp Proctor, Tacoma

FLEA MARKET: Scavenge for vintage and repurposed goods of all kinds at the traveling market The Great Junk Hunt at the Washington State Fairgrounds Friday and Saturday. With more than 90,000 sq. ft., The Great Junk Hunt is a round-up of curated vendors selling their goods, plus no party is complete without cocktails, live music, and aisles of junkin’ treasure. 3-9 p.m. Friday, April 29, 10 a.m. to 4 p.m. Saturday, April 30, Ninth and Meridian, Puyallup

THEATER: Tacoma Little Theatre in partnership with University of Washington-Tacoma and Toy Boat Theatre, present The Happiest Song Plays Last, by Quiara Alegría Hudes, and directed by Marilyn Bennett. In a barrio living room in North Philly, an activist-turned-music-professor moonlights as the local soup kitchen queen, cooking free rice and beans for any hungry neighbor. Halfway around the world, her cousin relives his military trauma on the set of a docudrama that’s filming in Jordan. With the Egyptian revolution booming in the distance, these two young adults try to sing a defiant song of legacy and love in the face of local and global unrest. 7:30 p.m. Friday, April 29 and Saturday, April 30, 2 p.m. Sunday, May 1, 210 N. I St., Tacoma

FILM: The Grand Cinema screens Memoria, Director Apichatpong Weerasethakul first English language film — though a lot of the dialogue is in Spanish — starring Tilda Swinton as a woman who is startled by strange, deafeningly loud thudding noises at unexpected moments. It seems she’s the only person who can hear them, and the movie follows her quest to at first replicate the sounds and then later track down their source, increasingly obsessed and venturing all the way into the jungles of the Amazon. Bonus: The Grand will hold a post-film discussion after the April 30 2:30 p.m. screening led by artist, curator, podcaster, and museum worker Ellen Ito and Director and Programmer of the Tacoma Film Festival David Dinnell. 11:30 a.m., 2:30, 5:25 and 8:15 p.m. Friday, April 29-Sunday, May 1, 606 S. Fawcett, Tacoma

ZOO: What do ferns, mosses, cycads, and ginkoes have in common? They are living fossils that have been around since the time of the dinosaurs. Sunday, Point Defiance Zoo & Aquarium’s lead horticulturalist Bryon Jones will give you a tour of this Jurassic Zoo. Hang out with Jones and be awed by the power of plants. 10 a.m. Sunday, May 1, Pacific Rim Plaza, Point Defiance Zoo & Aquarium, 5400 N. Pearl St., Tacoma, free with admission