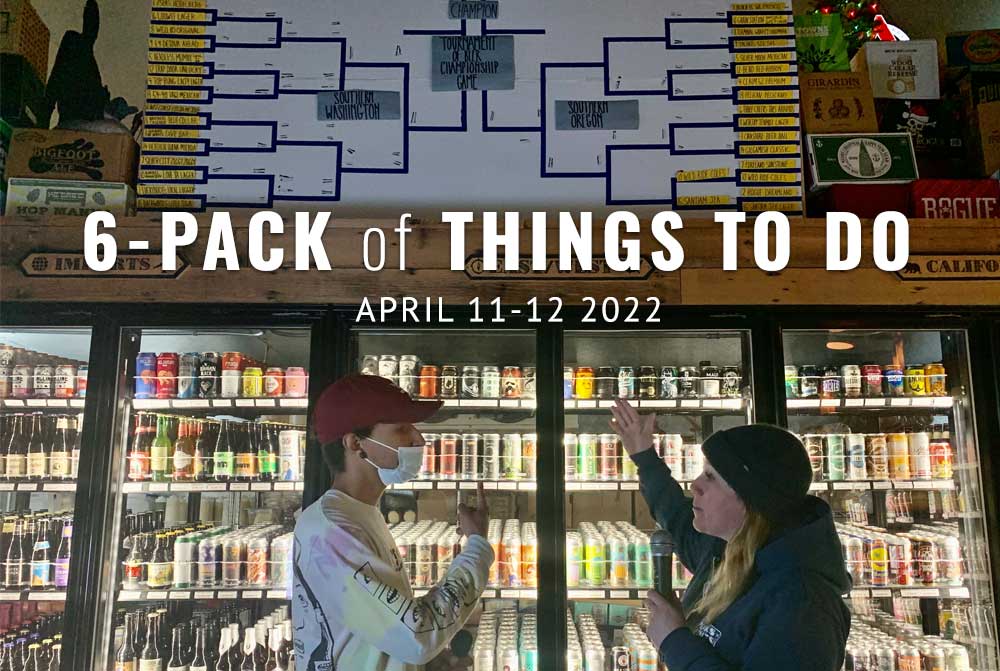 Relish so tremendously, so irresistibly the fact you exist, the fact that you can feel your heartbeat through your clothes, the fact you get to actually drink international ciders, drink mead while listening to metal, and vote for your favorite Northwest brewed lager. Enjoy 6-Pack of Things To Do: April 11-12 2022.

TOURNAMENT OF BEER: During the month of March, we asked our Peaks and Pints patrons and the public to vote for their favorite lagers brewed in Washington and Oregon. Through an online nomination system, beer enthusiasts listed 86 lagers with the top 64 seeding the Tournament of Beer: Northwest Lagers’ knockout bracket, which kicked off Friday when the first eight lagers met on our wooden floor. This scenario continues Monday through Friday, until the tournament’s final game, April 30. Let’s dive into today’s First Round action featuring four lager battles. Please vote for one beer per game. Voting for today’s lager battles ends at 11:45 p.m. Peaks bartenders will announce the winners tomorrow morning around 10 a.m., as well as the next round of four beer battles. Click here to vote!

CIDER FLIGHT: Apples were among some of the first crops grown in colonial America. Potted seedlings and bags of apple seeds were brought over on the Mayflower. The Bible-thumping Puritans were not teetotalers. Apple orchards in colonial America usually meant one thing: hard cider. Apples flourished in the fertile soil and friendly climate, and soon apples were a key part of most colonial farms and menus. A thirst for beer and the introduction of prohibition laws meant hard cider became an almost forgotten beverage, but it is currently undergoing a revival with small producers and large booze brands all getting in on the act. While boozy, apple-based beverages might seem like an all-American tradition, Spain, France, Germany, Canada, the United Kingdom, and beyond also have long traditions of cider production in unique regional styles. Today’s Monday cider to-go flight is all about foreign ciders. 11 a.m. to 10 p.m., Monday, April 11-Tuesday, April 12, Peaks & Pints, 3816 N. 26th St., Basecamp Proctor, Tacoma

FILM: Everything Everywhere All At Once screens through Thursday at The Grand Cinema. Directors Daniel Kwan and Daniel Scheinert, the “Swiss Army Man” filmmakers collectively billed as “Daniels,” presents a hilarious and big-hearted sci-fi action adventure about an exhausted Chinese American woman, played by Michelle Yeoh, who can’t seem to finish her taxes. The aging Chinese immigrant is swept up in an insane adventure, where she alone can save the world by exploring other universes connecting with the lives she could have led. 1:30, 4:30 and 7:30 p.m., Monday, April 11-Thursday, April 14, The Grand Cinema, 6060 S. Fawcett, Tacoma

TRIVIA: Before the fireworks shows every night, the rooftops of the buildings in Fantasyland are doused in water so sparks from the fireworks don’t set off fires on top of the buildings. There are multiple American flags on Main Street, but only one is an accurate American flag, and that’s the one in the main square. The other flags all have faults – different numbers of stars or stripes – so they don’t have to be illuminated at night or taken down after dark. There have been a few times in the history of the Haunted Mansion ride in which it had to be closed because someone tried to scatter a loved one’s ashes on the ride. Feel free to use these bits of Disney trivia during Disney Trivia Night at the Tacoma Comedy Club tonight. 7 p.m., Monday, April 11, Tacoma Comedy Club, 933 Market St., Tacoma, reservations required here

MUSIC: Who doesn’t want a little mead and metal action on a Monday night? KVLT Mead will pour flavors of their heady honey beverages, and Wayfarer and Isenordal will bring the metal. Colorado’s Wayfarer will lay down a cavalcade of fury, melancholia, and dust-laden storytelling. Seattle based atmospheric/folk black metal/doom Isenordal entrances with haunting melodies, a rich mixture of strings and keys. 9 p.m., Monday, April 11, KVLT Mead, 5011 S. Washington St., Tacoma, 21+, no cover

FILM: The Grand Cinema screens A Crime on the Bayou, the story of a Black teenager arrested for touching a white boy’s arm. The unjustly arrested Black man and his young Jewish attorney take the case to the Supreme Court to fight for the right of all Americans to a fair trial. The Grand will host a post-film discussion and Q&A with one of the attorneys in the film, Armand Derfner, after the 7 p.m. screening. Derfner, a graduate of Princeton University and Yale Law School, has been a civil rights lawyer in Mississippi, South Carolina and Washington D.C. for more than a half century. 1:30 and 7 p.m. Tuesday, April 12, The Grand Cinema, 606 S. Fawcett, Tacoma, photo courtesy of BullFrog Films